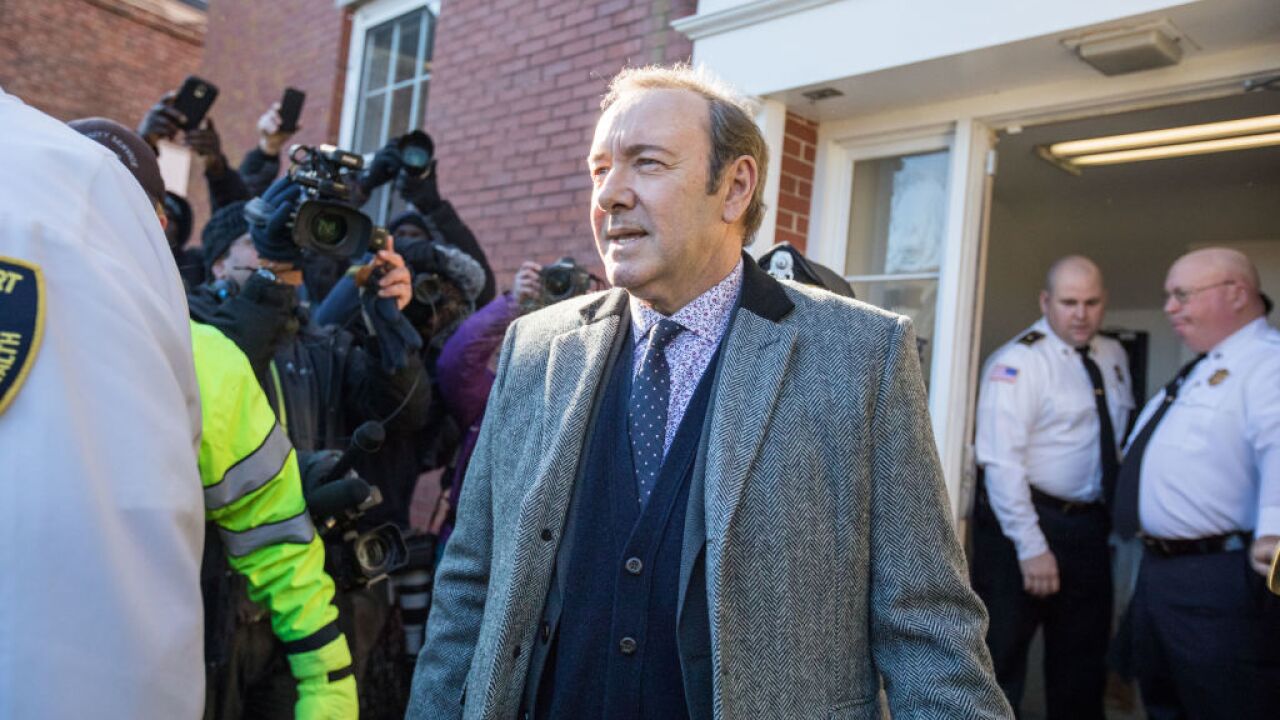 A judge in Massachusetts said the case against actor Kevin Spacey, accused of groping a young man in a bar three years ago, may be dismissed because the accuser invoked the Fifth Amendment after testifying he did not delete anything from a cell phone central to the case.

Spacey, 59, faces criminal charges of indecent assault and battery in connection to the alleged July 2016 incident. The former "House of Cards" star has pleaded not guilty and did not attend the Monday hearing. If convicted, he could face up to five years in prison.

The pretrial hearing in Massachusetts focused on the cell phone the accuser used to text his girlfriend and send a video during the alleged assault. The prosecution said it obtained data from the phone, which it shared with the defense, and returned the phone to the man's family.

But the phone is now missing.

Spacey's defense team wants to examine the phone itself, claiming that exculpatory evidence may have been deleted before it was given to police and prosecutors. One of his lawyers, Alan Jackson, told the judge they believe the accuser and his mother "deleted things off the phone....they sanitized the phone."

After testifying he didn't delete anything from the phone, the accuser consulted with his attorney and decided to exercise his Fifth Amendment right against self-incrimination. Judge Thomas Barrett found the accuser had the right to take the Fifth but said his testimony will be stricken.

The judge said the criminal case could be dismissed, but that it would not happen Monday.

"I have no knowledge of any deletion on my phone"

Judge Barrett ruled in June the defense was entitled to inspect the phone. But the accuser and his family have said they don't have it and don't know where it is.

The accuser testified that he did not delete any messages from his now-missing iPhone 5S, which he used to text his girlfriend and a group of seven friends the night of the incident in question.

While he acknowledged parts of the conversation were missing, the accuser maintained he did not delete anything from his phone and suggested there may have been an error with the phone.

"I have no knowledge of any deletion on my phone," he testified. CNN is not naming the accuser because he is an alleged victim of sexual assault.

Jackson, the defense lawyer, went through some of the texts from the screen shots that were turned over to police to show that they do not entirely match the data recovered from the forensic image, including a text from his girlfriend instructing him to "walk away."

The lead investigator on the case testified that data had been altered on the phone.

When asked by Jackson if he knew it was a crime to delete messages, the accuser said he was not previously aware of that.

The man then took the Fifth Amendment.

According to Massachusetts State Trooper Gerald Donovan, the lead investigator, their notes reflect the phone was returned to the accuser's father. But an official receipt of the phone's return was not filed by police.

The accuser's father testified he did not remember getting the phone back and has not seen the phone since it was first taken by investigators.

He said he never told anyone to delete text messages from the phone.

The accuser and his mother told the court through their lawyer that the last time the accuser saw his phone was before his mother delivered it to prosecutors in December 2017. On Monday, they reiterated that to the court in testimony.

The accuser's mother -- Heather Unruh, a former TV news anchor in New England -- told Jackson she never instructed her son to delete text messages on his phone but did look at the phone herself before turning it over to police. She said she was looking for a video showing Spacey's hand down her son's pants because it was "very important."

Unruh testified that "I deleted a few things," but she did not say exactly what. There was "no intent on my part," she said.

Jackson showed her photos of her son drinking alcohol that were deleted. Asked if she deleted the pictures because they did not play into the narrative that Spacey plied his son with alcohol, she responded she was a mother looking at her son's phone for the first time and she saw things that "concerned" her.

"I didn't touch anything that was relevant to the case," she said.

Jackson thundered back that "everything" was relevant.

What happened to the phone?

Legal filings by the defense say that during the alleged assault, the accuser sent text messages to his girlfriend from the phone, including a short video, and that the screenshots of the messages appear to begin mid-conversation.

Some of the texts include the accuser telling his girlfriend: he got my number, he asked me to come out with him, he pulled my zipper down... he reached down my pants. The accuser also asks for help several times in the texts.

Spacey's lawyers argued that the screen shots and a report by police leave no question evidence was deleted, and they should be allowed to try to recover it.

When asked about possible missing text messages, Mitchell Garabedian, a family lawyer, told CNN he had no comment.

Garabedian said they're trying to find backups of what was on the phone. They have a thumb drive and a forensic image of the accuser's MacBook, but he could not guarantee there were no deletions, Garabedian said.

In another surprising twist, a civil lawsuit filed in June against Spacey was dropped last week.

In court Monday, Garabedian said "because of the emotional aspect," the civil suit has been dismissed. Garabedian, referring to Spacey's accuser, said "he only wanted one roller coaster ride at a time."

Later during the testimony of the accuser's mother, Jackson asked her if the civil suit was dropped because of a secret settlement. She emphatically answered no.

Spacey's accuser, who was an 18-year-old busboy at a Nantucket bar at the time of the alleged assault, filed the civil complaint on June 26. In it, the accuser said Spacey bought him "multiple alcoholic beverages" before he forcibly touched and fondled his genitals -- the same allegations he made in the criminal case.

The civil lawsuit accused Spacey of explicit sexual behavior and infliction of mental distress. It demanded judgment in an amount to be determined by a jury, including costs, interests and attorney fees.