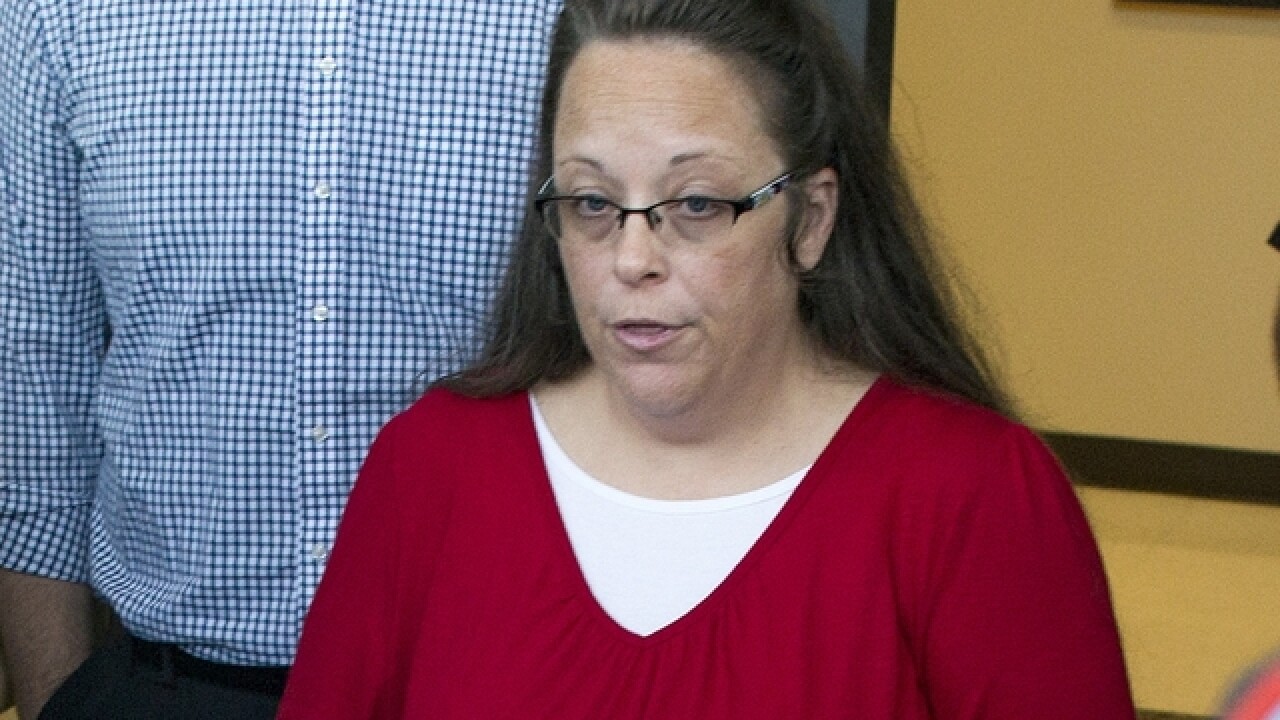 FRANKFORT, Ky. (AP) — Rowan County Clerk Kim Davis, who spent five days in jail for refusing to issue marriage licenses to same-sex couples, said she prayed for those who disagreed with her and feels the pace of social change has "awakened" Christians across the country.

In an interview with The Associated Press about her year at the center of one of the biggest social changes in decades, Davis described it as "a very emotional and a very real situation to all people." But she said simply telling others about her faith was not "going to make anybody believe anything." And so she put her faith in action by refusing to issue the licenses.

"No one would ever have remembered a county clerk that just said ... 'Even though I don't agree with it, it's OK. I'll do it,'" Davis said. "If I could be remembered for one thing, it's that I was not afraid to not compromise myself."

Davis spoke with The Associated Press on Tuesday morning. By that afternoon, Kentucky Republican Gov. Matt Bevin had issued an executive order removing the names of county clerks from marriage licenses — which Davis' lawyer described as a Christmas gift. The issue was one of the most prominent disagreements between Bevin and Democratic nominee Jack Conway in the November election.

Bevin spoke at a rally at the Carter County Detention Center on the day Davis was released from jail. But Davis said she did not think her actions handed the election to Bevin by galvanizing conservative voters across the state.

"I think he truly won on his own merit," Davis said. "I wouldn't take anything away from him."

The U.S. Supreme Court's ruling in June effectively legalized same-sex marriage across the country. But Davis stopped issuing all marriage licenses the day after the ruling, saying it would be a sin for her to license a same-sex couple.

Her actions inspired praise and derision across the country as they tested the limits of the court's ruling. And they opened Davis up to criticism for her personal life, including the revelation that she had been married three times, which some said made her a hypocrite.

"How ironic that God would use a person like me, who failed so miserably at marriage in the world, to defend it now," Davis said Tuesday. "The Lord picks the unlikely source to convey the message."

Since her release from jail, Davis' office has issued altered marriage licenses that do not include her name or the name of the county. The American Civil Liberties Union has asked Bunning to order Davis to reissue the licenses, but Bunning has made no decision. For the couples that sued Davis, the case is not over.

"It makes me uncomfortable to hear people using God ... to justify their bigotry," said 39-year-old David Moore, who with now-husband David Ermold sued Davis in federal court. "I don't see how that makes her a victim or a hero. She really just had a job to do, and she just needs to do her job."

Davis' days in the spotlight are not over, either. Next month, the Kentucky legislature is expected to update the state's marriage laws and will consider a provision exempting county clerks from having to issue them. Davis said Kentucky's marriage laws have been "completely eviscerated" by the Supreme Court's ruling and said she would be willing to come to the state Capitol to testify about any changes.

And in two years, Davis will be up for re-election in what is surely to be one of the most publicized county clerk races in decades. She said she did not know whether she would run for re-election, noting that "a lot of things could happen between now and then." A lifelong Democrat, Davis recently switched to the Republican party as the GOP continues to make historic gains across the state.

She dismissed the notion that she could run for higher office given her name recognition throughout the state.

"If I were a politician, I would probably jump on that and grab it and growl. But I'm not a politician," she said. "I very much enjoy my job."