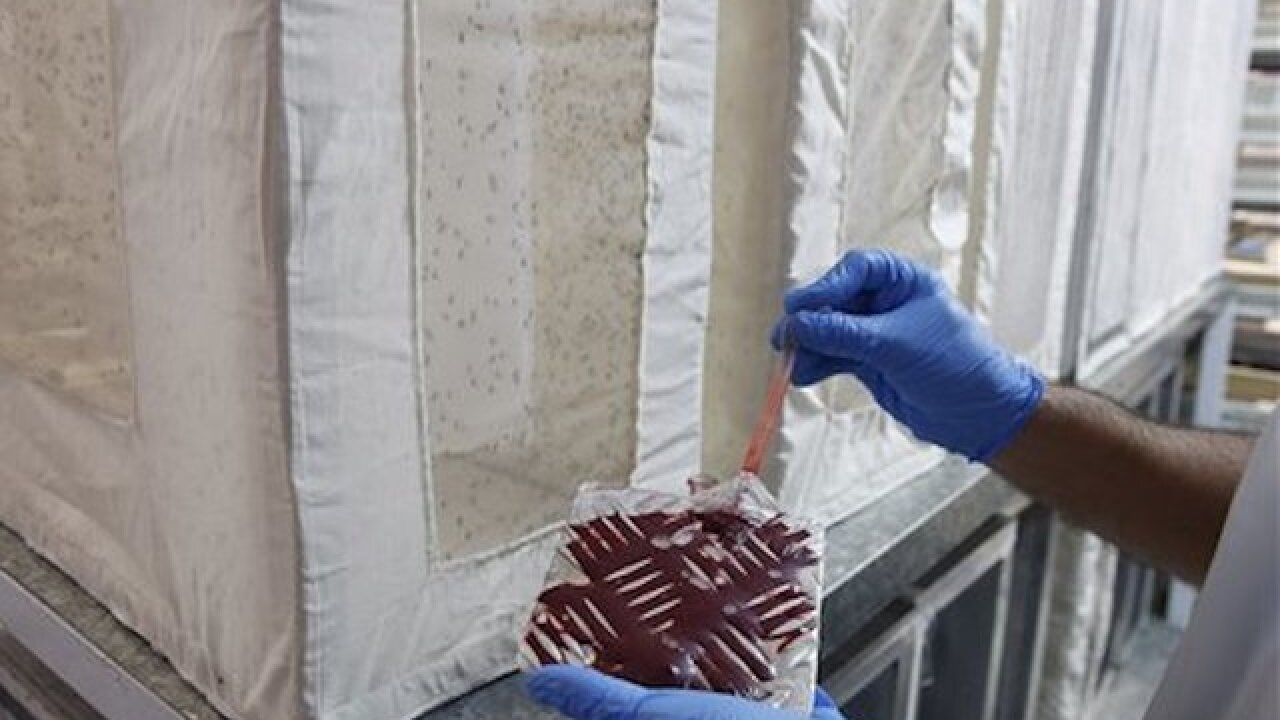 Copyright Associated Press
Andre Penner
<p>In this Feb. 1, 2016 photo, a technician from the British biotec company Oxitec holds with a bag of blood to feed Aedes aegypti mosquitoes that were genetically modified to produce offspring that don't live, before releasing them into the wild as part of an effort to kill the local Aedes population, which is a vector for the spread of the Zika virus, in Campinas, Brazil. Brazil is in the midst of a Zika outbreak and authorities say they have also detected a spike in cases of microcephaly in newborn children, but the link between Zika and microcephaly is as yet unproven. (AP Photo/Andre Penner)</p>

RIO DE JANEIRO (AP) — With no hope for a vaccine to prevent Zika in the near future, authorities are focusing on the most effective way to combat the virus: killing the mosquito that carries it.

Fumigation is one method; another is seeking out and draining standing water where the insect lays its eggs. Other strategies are possible, including larvae-devouring fish, genetically modified insects and even lasers.

But officials agree that it won't be easy.

The battle is focused on Aedes aegypti, a formidable foe. It carries not only Zika, but other diseases like dengue, yellow fever and chikunguya. Well adapted to humans, it lives largely inside homes and can lay eggs in even a bottle-cap's worth of stagnant water. The dishes beneath potted plants are a favorite spot, as are abandoned tires, bird feeders and even the little puddles of rainwater that collect in the folds of plastic tarps.

"This mosquito really is a bear to deal with," said Thomas Scott, professor of entomology and epidemiology at the University of California, Davis. "It's almost like a cockroach of the mosquito world."

Scientists are also trying to determine if, and how easily, Zika could be spread by sex or by blood transfusions. But the virus is usually transmitted through mosquito bites.

Brazil's first case of Zika — a virus that was first identified in Uganda in 1947 and subsequently spread to parts of Asia — was recorded in the middle of last year. Researchers don't know exactly how it made the jump, but two theories suggest it may have arrived with tourists visiting the country for the 2014 World Cup soccer tournament or an international canoeing competition the same year.

Thanks to Aedes aegypti, the disease quickly spread across Brazil and to more than 20 countries in the region, the Caribbean and beyond, leading the World Health Organization this week to declare an international emergency.

The concern is not the disease itself — Zika's immediate effects are mild, consisting mostly of a moderate fever and a rash, and only a fifth of those afflicted notice any symptoms. But Brazilian authorities say also they have detected a spike in cases of microcephaly, which leaves infants with unusually small heads and can result in brain damage and a host of developmental and health problems. The link between Zika and microcephaly is as yet unproven.

Brazil is pouring money into the development of a vaccine against Zika. But a viable vaccine is years away, and public health experts say for now, slashing the mosquito population is key.

"The most important thing," said Jayme Souza-Neto, a researcher at Sao Paulo State University who studies interactions between viruses and mosquitoes, is to "try to prevent mosquitoes from reaching adulthood."

The country had success against Aedes once before, when a nationwide campaign to drain standing waters and spray the insecticide DDT led to a steep fall in dengue and yellow fever in the late 1950s. But as the crusade faded, the insect drifted back in from neighboring countries.

While DDT has been shown to harm the environment, new insecticides "really are pretty safe environmentally," said Charles Apperson, a professor emeritus of entomology at North Carolina State University. But as with DDT, there's still the issue of insects developing resistance, so new insecticides must continually be developed, he said.

Brazilian President Dilma Rousseff has pledged to send some 220,000 members of the armed forces door-to-door to help ferret out the spots of standing water. But Scott said while campaigns aimed at eliminating stagnant water can help, they're not enough.

Pesticides are needed too, he said. This week, Florida Gov. Rick Scott declared a state of emergency in four of his state's counties in response to reports of nine cases of Zika, all believed to be travelers who contracted the disease outside of the country. The order allows Florida's agriculture department to use mosquito spray more in those areas.

Oxitec, a British biotech firm, says its genetically modified mosquitoes could be another part of the solution. It raises male mosquitoes that have been modified to produce offspring that do not live. These males are released into the target area, where they compete with wild males to mate with the wild females.

The company said tests begun last April as part of a dengue-fighting program in the small southeastern city of Piracicaba suggested the release of the GM males reduced the wild Aedes larvae population in the target neighborhood by more than 80 percent.

Oxitec officials insist the company — which has also done projects in Panama and the Caiman Islands — has the capacity to scale up the program to tackle large cities such as Recife, a sprawling seaside metropolis of 1.5 million that's the epicenter of Brazil's Zika outbreak.

"I'm worried that it's not feasible at the country or regional scale," said Scott.

Jeff Powell, a mosquito geneticist at Yale University, says such a program would be expensive, and "as soon as you stop, the mosquito population is going right back up" to its initial level.

"I don't think that is a long-term solution," he said.

A small project with a different strategy in the El Salvador's coastal community of Playa San Diego offers a glimmer of hope, using an approach that has shown success elsewhere.

Under a program developed in 2012 by community health worker Marielos Sosa to combat dengue, small fry fish are introduced into the barrels or tanks in which families store potable water. The fish — tilapia and a brown-and-white local species called sambo — eat the mosquito larvae in the tanks.

"The result is that to date we have not had any cases of dengue, nor chikunguya or now Zika," said Sosa, whose project has expanded to six coastal townships beset by mosquitoes. And with 7,138 suspected cases of Zika nationwide, the mayors of San Salvador and surrounding suburbs have also voiced interest in the project.

Another anti-dengue strategy may also pay off for fighting Zika. Scientists have been studying the infection of mosquito populations with a natural bacterium called Wolbachia, which curbs their ability to transmit dengue. Now they want to find whether it will also hamper the Zika virus.

And then there's what might be called a Star Wars approach.

Intellectual Ventures of Bellevue, Washington, has developed a device that can identify mosquitoes in flight and zap them with lasers, at least in a lab setting. They say an array of such devices might be able someday to keep mosquitoes out of a public area or deplete a more widespread population.

Could it be used in the current battle? It's "not a 'silver bullet' solution to Zika," the company told AP in a statement, but it is "one of many potential interventions in a broader strategy to address the virus."