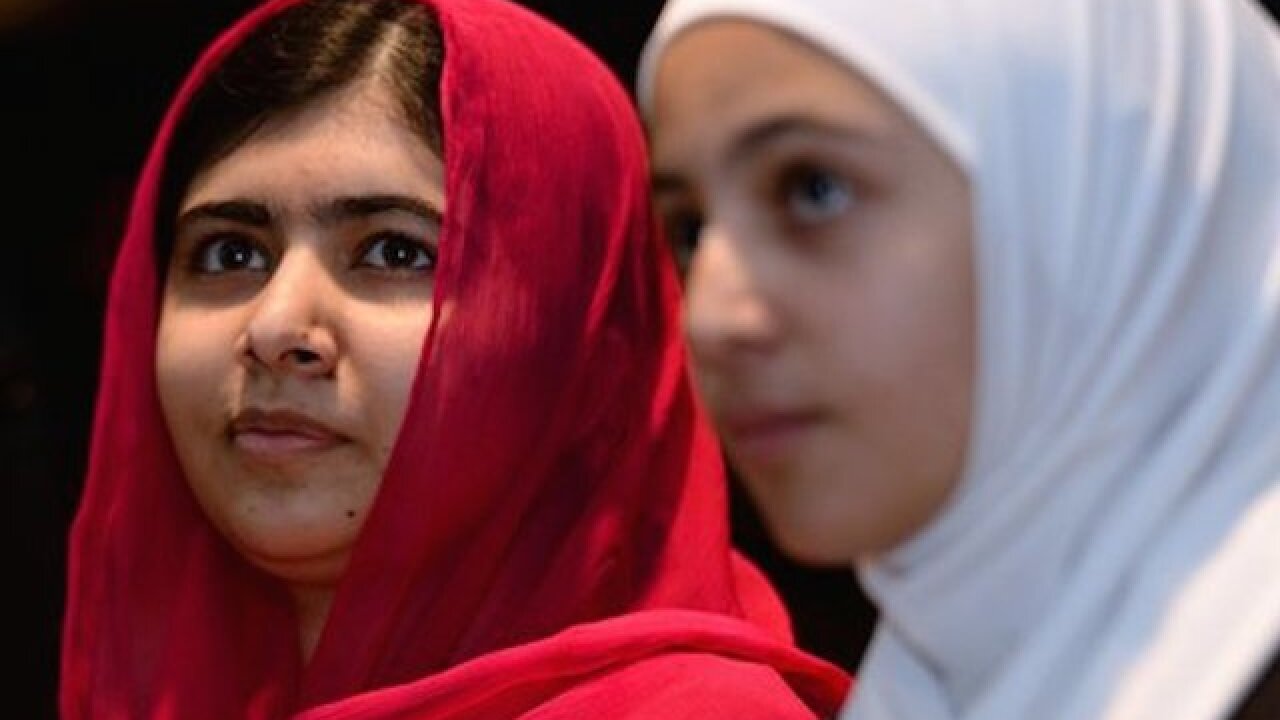 Copyright Associated Press
Dtefem Rousseau
<p>Nobel Peace Prize winner Malala Yousafzai, left, from Pakistan and 17-year-old Syrian refugee Mazoun Almellehan, during the first focus event on education at the 'Supporting Syria and the Region' conference at the Queen Elizabeth II Conference Centre in London, Thursday, Feb. 4, 2016. Leaders and diplomats from 70 countries are meeting in London Thursday to pledge billions to help millions of Syrians displaced by war, and try to slow the chaotic exodus of refugees to Europe. (Stefan Rousseau Pool via AP)</p>

LONDON (AP) — Leaders and diplomats from 70 countries met London Thursday to pledge billions to help millions of Syrians displaced by war — and try to slow the chaotic exodus of refugees to Europe.

The one-day meeting, held under tight security near the British Parliament, is aimed at gathering donations and agreeing on plans for economic and educational projects to help the 4.6 million Syrians who have sought refuge in neighboring countries including Jordan, Lebanon and Turkey.

Jordan's King Abdullah said his country could not sustain unaided the burden of almost 1.3 million Syrian refugees, who now make up a fifth of Jordan's population.

"We are doing our best against very difficult odds," he said, but added: "We have reached our limit.

"Our country will continue to do what we can do to help those in need, but it cannot be at the expense of our own people's welfare."

The meeting opened hours after the latest U.N.-led bid to start peace talks in Geneva was suspended for three weeks — a sign of major difficulties. The faltering peace process increases pressure on donor countries to commit long-term aid to the victims of a five-year civil war that has no quick end in sight.

The U.N. and regional countries say they need $9 billion in assistance for 2016 alone, as the situation in the region deteriorates,

Conference co-host Britain has pledged 1.2 billion pounds ($1.75 billion) in new aid between now and 2020, and the U.S. committed $900 million to bring total U.S. humanitarian spending on the five-year war to $5.1 billion.

Previous aid conferences for Syria have failed to meet their targets. Last year's, in Kuwait, raised just half its $7 billion target, forcing cuts to programs such as refugee food aid.

But this year's organizers — which include Britain, Germany and the U.N. — hope that finding jobs and schools for refugees can foster stability and keep displaced Syrians in the Middle East, slowing the chaotic migration of refugees to Europe.

British Prime Minister David Cameron said that "using fundraising to build stability, create jobs and provide education can have a transformational effect in the region — and create a future model for humanitarian relief."

"And we can provide the sense of hope needed to stop people thinking they have no option but to risk their lives on a dangerous journey to Europe," he said.

The conference also will discuss plans to create economic incentives for countries that are under the strain of housing millions of newcomers.

The politicians, diplomats and aid groups also will seek ways of getting more humanitarian aid to suffering civilians inside Syria.

U.N. Secretary-General Ban Ki-moon told an audience at Cambridge University on Wednesday that the U.N. has been able to deliver aid to "much less than 5 percent" of the 400,000 Syrians living in besieged villages, many of them in areas controlled by the Islamic State group.

Neither the Syrian government nor rebel groups are due to attend the conference.

Syrian government forces, backed by Russian airstrikes, have increased the pace of attacks on opposition forces in recent days, as the Geneva peace talks faltered.

The U.N.'s Ban told the conference it is "deeply disturbing that the initial steps of the talks have been undermined by the continuous lack of sufficient humanitarian access, and by a sudden increase of aerial bombing and military activities within Syria."

He said that "the coming days should be used to get back to the table not to secure more gains on the battlefield."