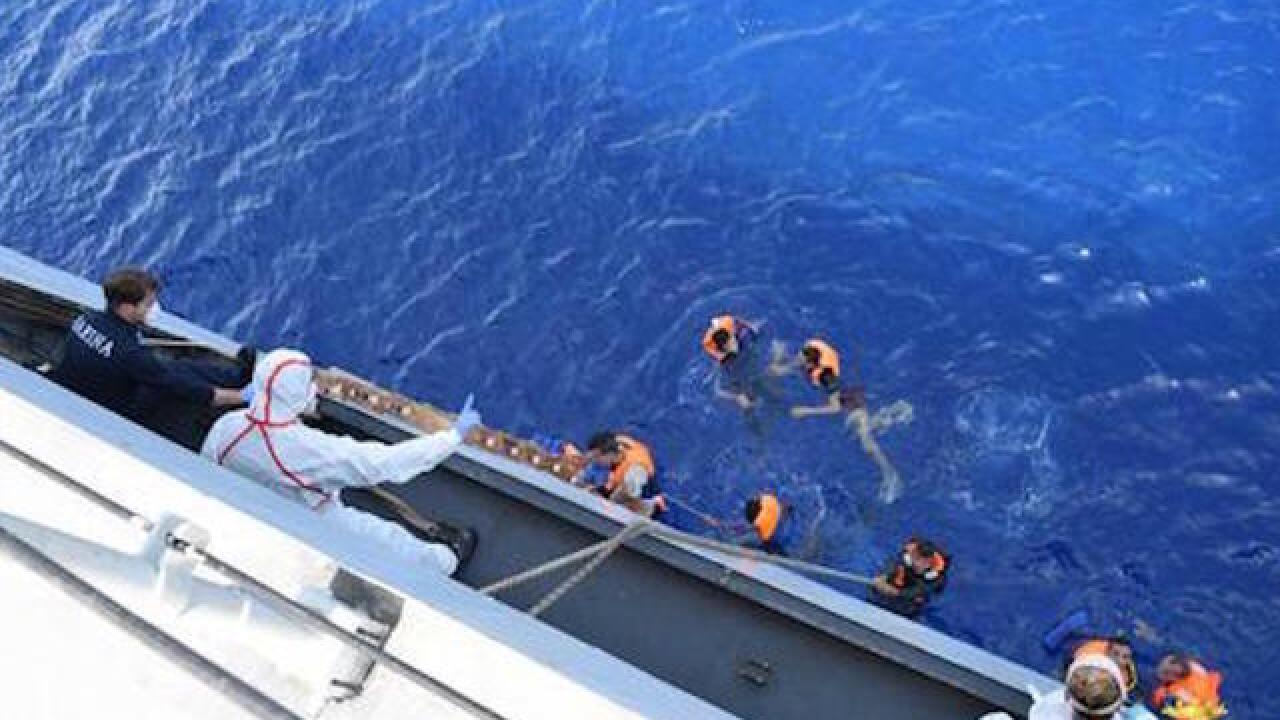 Copyright Associated Press
<p>People are helped to board an Italian Navy ship after a boat overturned off the Libyan coast, Wednesday, May 25, 2016. The Italian navy says it has recovered 7 bodies from the overturned migrant ship off the coast of Libya. Another 500 migrants who on board were rescued safely. A statement from the Italian navy Wednesday says the Bettica patrol ship was responding to a migrant ship in distress when it flipped, sending migrants into the sea. (Marina Militare via AP Photo)</p>

ATHENS, Greece (AP) — More than 110 bodies were pulled from the sea off Libya's shores Friday after a smuggling boat carrying mainly African migrants sank into the Mediterranean, and a separate massive search-and-rescue operation in the open sea saved 340 people and recovered nine bodies.

The two sinkings were the latest deadly disasters for refugees and migrants hoping to find better lives in Europe, and came in addition to the over 1,000 people who drowned since May 25 while attempting the perilous, lengthy journey across the sea from North Africa to Europe's southern shores.

As traffickers take advantage of the improving weather, officials say it is impossible to know how many unseaworthy boats are being launching daily from Libya to Europe — and how many never reach their target. A host of naval operations in the southern Mediterranean, coordinated by Italy, have been stretched just responding to the disasters they do hear about.

In Libya, at least 117 bodies —75 women, six children and 36 men — were pulled out from the waters near the western city of Zwara, Mohammed al-Mosrati, a spokesman for Libya's Red Crescent, told The Associated Press. All but a few were from African countries. The death toll was expected to rise. No lifejackets were seen on photos Red Cross photos of the bodies.

But, as is frequently the case, authorities were uncertain when or how the people died. Libyan coast guards found an empty boat drifting Thursday, Libyan navy Col. Ayoub Gassim told the AP, adding it was possible the vessel had capsized a day earlier.

Al-Mosrati of the Red Crescent said the bodies were not "decomposed and therefore have drowned within the past 48 hours." He said the boat that was found might have been the one carrying the victims. But strong winds and currents can push bodies from one place to the other, he said, making it difficult for authorities to determine where the tragedy occurred.

Often the first signs of a tragedy are either a mayday call from one of the passengers to European authorities or the macabre discovery of bodies washing up on shores.

Speaking by telephone, Gassim of the Libyan navy blamed Europe for "doing nothing but counting bodies" in efforts to stop the massive illegal migration from Libya.

The situation in Libya has been particularly chaotic since the ouster and killing of the country's longtime autocratic ruler Moammar Gadhafi in 2011. The country has been split into rival governments and parliaments where each is supported by a loose set of militias and tribes. Smuggling gangs have taken advantage of the chaos to send waves of overcrowded boats toward Europe.

Aid officials say the last two weeks have been especially deadly because smugglers are using riskier tactics, bigger boats and even less-seaworthy vessels than ever before.

Frederico Soda, who heads International Organization for Migration's Mediterranean office in Rome, said the increase in those making the deadly crossing was due "in part, to better weather, and in part to the use of bigger wooden boats that can carry more people than the rubber boats" used last year.

William Spindler, a spokesman for the U.N. refugee agency, noted new and far riskier tactics being used by traffickers. He said until last week he had never heard of smugglers using an overloaded boat carrying hundreds of people to tow another vessel packed with hundreds more that lacked an engine. The second boat capsized May 26, drowning what his agency estimated was around 550 migrants.

Greece's coast guard said the roughly 25-meter (82-foot) vessel, which resembled a large fishing boat, had been carrying an undetermined number of people when it was located half-sunk about 75 nautical miles south of Crete in international waters. It was not immediately clear where the boat was from, who it carried, or where it was trying to go.

Most survivors were picked up by the Norwegian-flagged Clipper Hebe tanker and were being transported to the Sicilian port of Augusta in Italy. Others were to be taken to Egypt and Malta. The coast guard said the operation was continuing to search for any potentially missing passengers.

"The information we have on the number of people on board the vessel is still unclear — we've heard that there were 400 or 500 people on board, but we cannot confirm that number," Coast Guard spokesman Nikos Lagadianos said. "There is a huge rescue effort underway."

Lagadianos said it would be "very difficult" for divers to reach the wreck anytime soon.

"A few hours ago, only the tip of the ship's mast was sticking out of the water. Now it's considered to have sunk," he said.

The short Aegean Sea crossing from the Turkish coast to Greek islands was the preferred sea route for migrants heading to Europe until Balkan countries closed their borders in March and the European Union reached an agreement with Turkey to send arriving migrants back. The deal has led to a dramatic decrease in the number of people landing on Greek islands from Turkey.

The Greek coast guard said it and European border patrol agency Frontex had rescued 164 people in four separate incidents Thursday off the Greek islands of Lesbos and Chios. Before the EU-Turkey migrant deal, thousands would arrive each day.

Many have speculated that the EU migrant deal could prompt Syrians and others to try the more dangerous Libya-to-Italy route, but authorities have seen no signs yet that any big shift is happening.