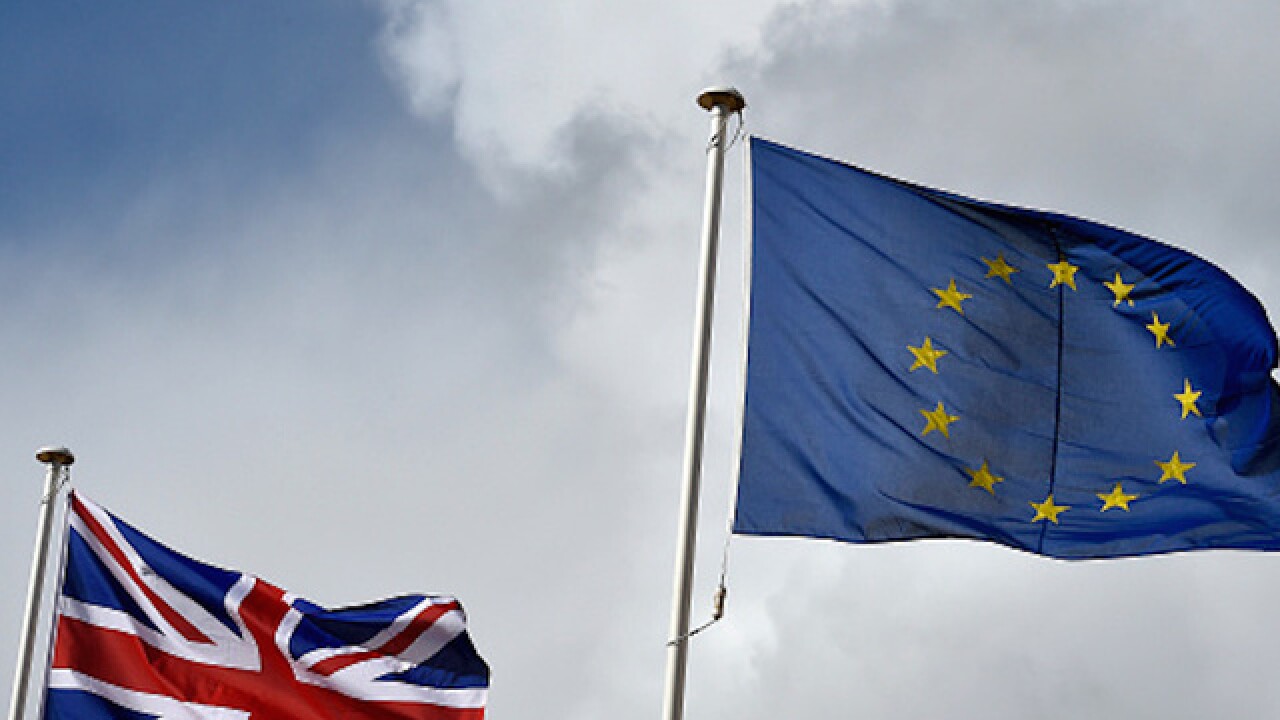 Pool
<p>VALLETTA, MALTA - NOVEMBER 27: Great Britain's Union Jack flag flutters next to the EU flag at the opening ceremony of the Commonwealth Heads of Government Meeting (CHOGM) at the Mediterranean Conference Centre on November 27, 2015 near Valletta, Malta. The biennial summit meeting of Commonwealth nations is attended by Queen Elizabeth II, Head of the Commonwealth, along with The Duke of Edinburgh, Prince of Wales and Duchess of Cornwall. (Photo by Toby Melville - Pool /Getty Images)</p>

LONDON (AP) — A new battle for Britain erupted Sunday, with London Mayor Boris Johnson saying he would join the campaign to encourage Britain to leave the European Union. The move posed a direct challenge to Prime Minister David Cameron, who has launched a major push to keep his country within the 28-nation bloc.

The popular, raffish Johnson immediately becomes the most prominent Conservative Party politician to break ranks with fellow Conservative Cameron's vision of the best course for Britain in a June 23 referendum on continued EU membership.

The referendum has divided Cameron's Conservative Party — while most in his Cabinet back his wish to stay, several Cabinet members oppose his stance and are campaigning for the country to break free of EU bureaucracy — a so-called "Brexit."

The decision of Johnson, a two-term mayor who has been touted as a possible future prime minister, deals a blow to Cameron's hopes of a united front ahead of what is expected to be a hard-fought referendum.

So far, no country has ever left the EU, and several European countries outside the bloc are still working to reform their economies and governance systems so they can join.

Johnson said it brought him "a huge amount of heartache" to go against Cameron and the Conservative government, but said he felt he was doing the right thing because the EU was "in danger of getting out of proper democratic control."

The decision was not a complete surprise because Johnson, 51, has for several decades criticized the growing EU bureaucracy, first in his newspaper and magazine columns and later from Parliament and city hall.

Nor is it clear to what degree Johnson will lead the "leave" campaign. He told reporters he did not want to take part in rallies and debates on the issue but would make his feelings clear.

Cameron earlier in the day used a TV appearance to try to convince Johnson to join the "stay" campaign. Saying that Britain's national security is best served by staying in the EU, Cameron cited emerging challenges from Russia and the rise of extremist groups in the Middle East as threats better dealt with as part of an alliance.

"In a world where you have got Putin to the east and ISIL-Daesh to the south, how do you stay strong?" Cameron asked, using alternative acronyms for the Islamic State group. "By sticking with your neighboring countries, your partners and your friends."

Cameron argues that those who support leaving the EU because they think it would slow the flow of migrants into Britain are mistaken. He said any trade deal Britain would negotiate with the EU if it left the bloc would have to allow for the free movement of labor in order to satisfy EU demands.

The prime minister also cautioned that it if Britain pulls out, it would take years to negotiate such a deal, since it also needs to make sure that British companies still have access to European markets.

Cameron has seen Justice Secretary Michael Gove and several junior ministers defect to the "leave" campaign, but none with the political heft of Johnson.

Cameron is backed by Treasury chief George Osborne and Home Secretary Theresa May, both — like Johnson — seen as possible future party leaders.

Nigel Farage, the UK Independence Party chief who is playing a prominent role in the "leave" campaign, said he "absolutely" wanted Johnson to join the group.

Cameron plans to go to Parliament on Monday to set the wheels in motion for the June 23 date.