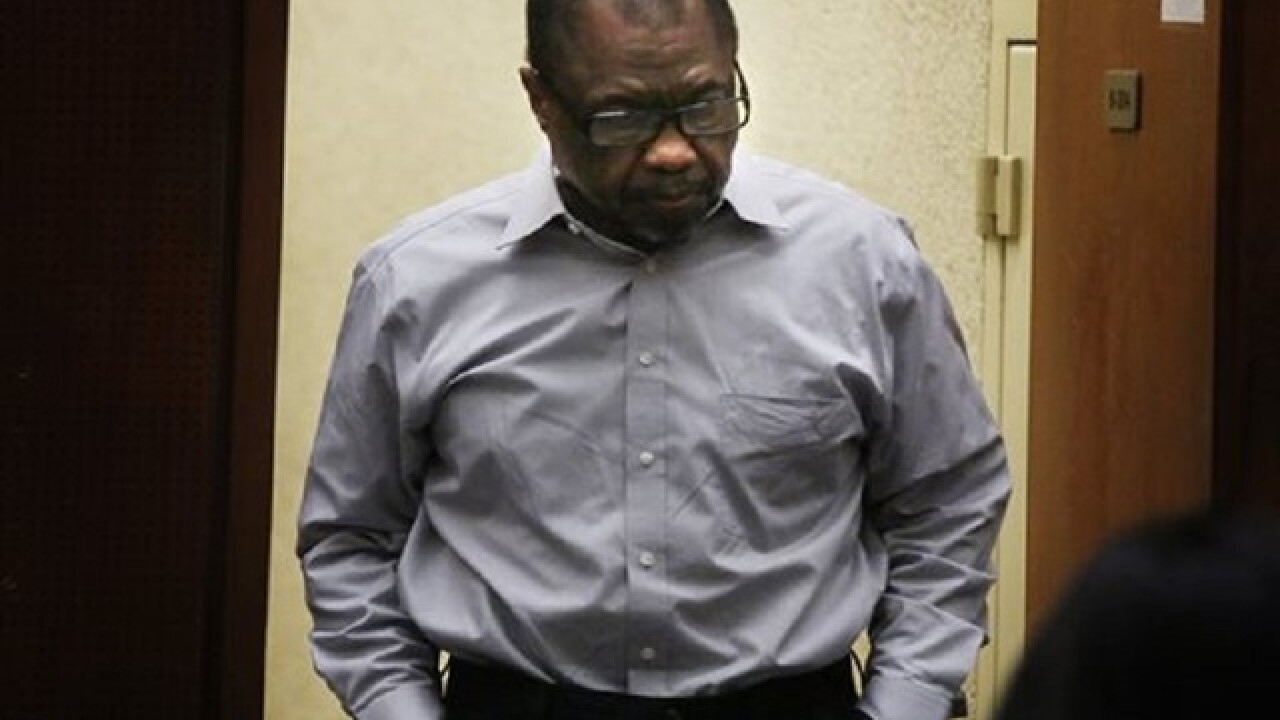 LOS ANGELES (AP) — A former Los Angeles trash collector was convicted Thursday of 10 counts of murder in the "Grim Sleeper" serial killings that targeted poor, young black women over two decades.
Lonnie Franklin Jr. showed no emotion as the verdicts were read and family members who had wondered if they would ever see justice quietly wept and dabbed their eyes with tissues in the gallery.
"We got him," exclaimed Porter Alexander Jr., whose daughter Alicia, 18, was shot and choked. Her body was found under a mattress in an alley in September 1988. "It took a long time. By the grace of God it happened. It's such a relief."
Prosecutors will seek the death penalty during the second phase of trial scheduled to start May 12.
Franklin, 63, was also was found guilty of one count of attempted murder for shooting a woman in the chest and dumping her body from his orange Ford Pinto two months after Alexander's killing. The survivor, Enietra Washington, provided a link to seven previous slayings and was a key witness at trial.
The killings from 1985 to 2007 were dubbed the work of the "Grim Sleeper" because of an apparent 14-year gap after Washington's shooting, though prosecutors now think he never rested and there were other victims during that span.
The crimes went unsolved for decades and community members complained that police ignored the victims because of their race and the fact some were prostitutes and drug users.
Much of the violence unfolded during the nation's crack cocaine epidemic when at least two other serial killers prowled the area then known as South Central.
The 10 victims, including a 15-year-old girl, were fatally shot or strangled and dumped in alleys and garbage bins. Most had traces of cocaine in their systems.
The cases were reopened after the last killing when a task force was assigned to revisit cases dozens of officers failed to solve in the 1980s. The team compiled ballistics evidence and DNA testing that hadn't been available at the time of the first killings.
Franklin, a onetime trash collector in the area and a garage attendant for the Los Angeles Police Department, had been hiding in plain sight, said Deputy District Attorney Beth Silverman.
He was connected to the crimes after DNA from a son, collected after a felony arrest, showed similarities to genetic material left on the bodies of many of the victims.
An officer posing as a busboy retrieved pizza crusts and napkins with Franklin's DNA while he was celebrating at a birthday party.
It proved a match with material found on the breasts and clothing of many of the women and on the zip tie of a trash bag that held the curled-up body of the final victim, Janecia Peters. She was found Jan. 1, 2007, by someone rifling through a dumpster who noticed her red fingernails through a hole in the bag.
Silverman described the victims as sisters, daughters and mothers who suffered frailties but had hopes and dreams.
She projected photos of the 10 women from happier days, many smiling from headshots that captured their youth and hairstyles of the times. The images were in stark contrast to gory crime scene and autopsy photos also displayed of half-naked bodies sprawled among garbage — images that made family members wince, weep and recoil.
Samara Herard, the sister of the youngest victim, Princess Berthomieux, said there were things she didn't want to see during the trial and had to hold her head down at times, but was elated with the verdict.
"I wanted to remember the sweet little girl who had her whole life in front of her," Herard said. "She had a heart of gold and she deserved to live a full life."
Defense lawyer Seymour Amster challenged what he called "inferior science" of DNA and ballistics evidence. During his closing argument, he introduced a new theory: a "mystery man with a mystery gun and mystery DNA" was responsible for all the killings. He said the man was a "nephew" of Franklin's who was jealous because his uncle had better luck with women, though he offered no supporting evidence or any name.
Amster based the theory on the testimony of the sole known survivor, Washington, who crawled to safety after being shot in Franklin's flashy Pinto. She testified that her assailant said he had to stop at his "uncle's house" for money before the attack.
Silverman scoffed at the "mystery nephew" notion, saying it was as rational an explanation as a space ship dropping from the sky and killing the women. She said Franklin had lied to Washington and was probably stopping at his house to get his gun.
Washington later led police to Franklin's street, but not his house.
The attack fit the pattern of other killings and showed how the killer carried out the crimes, Silverman said. The bullet removed from Washington's chest came from the same gun used to shoot the seven previous victims and she provided a detail that would later prove telling.
Washington described how her attacker took a Polaroid photo of her as she was losing consciousness. Police searching Franklin's house more than two decades later found a snapshot of the wounded Washington slouched over in a car with a breast exposed.
The Polaroid was hidden behind a wall in his garage.
Associated Press 2016