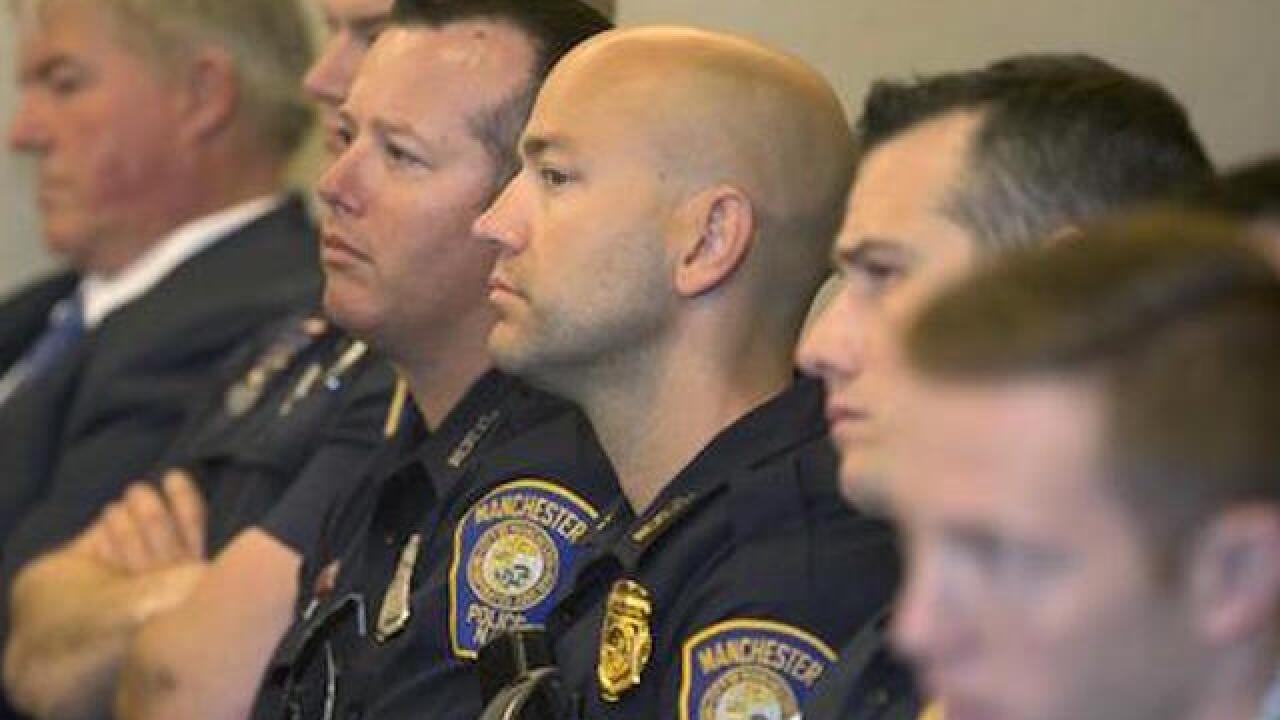 A public defender for Ian MacPherson, 32, entered the pleas on his behalf. MacPherson did not appear in the courtroom, where he would've come face to face with the two men he allegedly shot, Ryan Hardy and Matthew O'Connor, and dozens of their fellow Manchester Police Department officers.

O'Connor, who was shot in the leg, entered the courtroom on crutches. Hardy had been shot in the face and torso; he wore bandages on his face and neck.

"It's just important that each officer knows that they're supported by one another," Manchester Police Chief Nick Willard said after the arraignment. "The outpouring of support is just amazing, it's just one of those things that you wish you could capture it, bottle it, and keep it forever."

MacPherson is being held without bail. His father, Russell, appeared in court Monday and told reporters afterward that his son has a history of mental illness.

"He's been suffering mental illness issues for a long, long time," Russell MacPherson said, standing in front of several other family members. "Hopefully he's going to get help with that, and we're going to be there for him."

Hardy, 27, and O'Connor, 28, were shot early Friday on the city's west side, touching off an hours-long police search that kept residents in lock down and neighborhood schools closed. Police said Hardy stopped MacPherson around 2 a.m. Friday because he matched the description of a gas station robbery. MacPherson allegedly began shooting immediately before fleeing.

Police said O'Connor encountered MacPherson about 20 minutes later and was shot. Police searched for MacPherson for nearly three hours, and he was not injured during the pursuit or when he was apprehended, Willard said.

No new details of MacPherson's arrest or criminal history came out in court, but Willard said officials would be unsealing an affidavit related to the case later Monday. He declined to discuss details of the case or comment on MacPherson's father's statement that his son suffers from mental illness.

An unidentified man who appeared to be representing MacPherson's family said they would be making no further comments at this time. But Russell MacPherson told WMUR-TV this weekend that Ian MacPherson suffers from paranoid schizophrenia. He said his son didn't receive adequate mental health care and should not have been able to obtain a gun.

"I'm sorry to begin with that these officers were injured," Russell MacPherson told WMUR. "I know they have a very hard and thankless job often, but even more sorry if it was my son that did this."

MacPherson is next due in court for a hearing May 27.