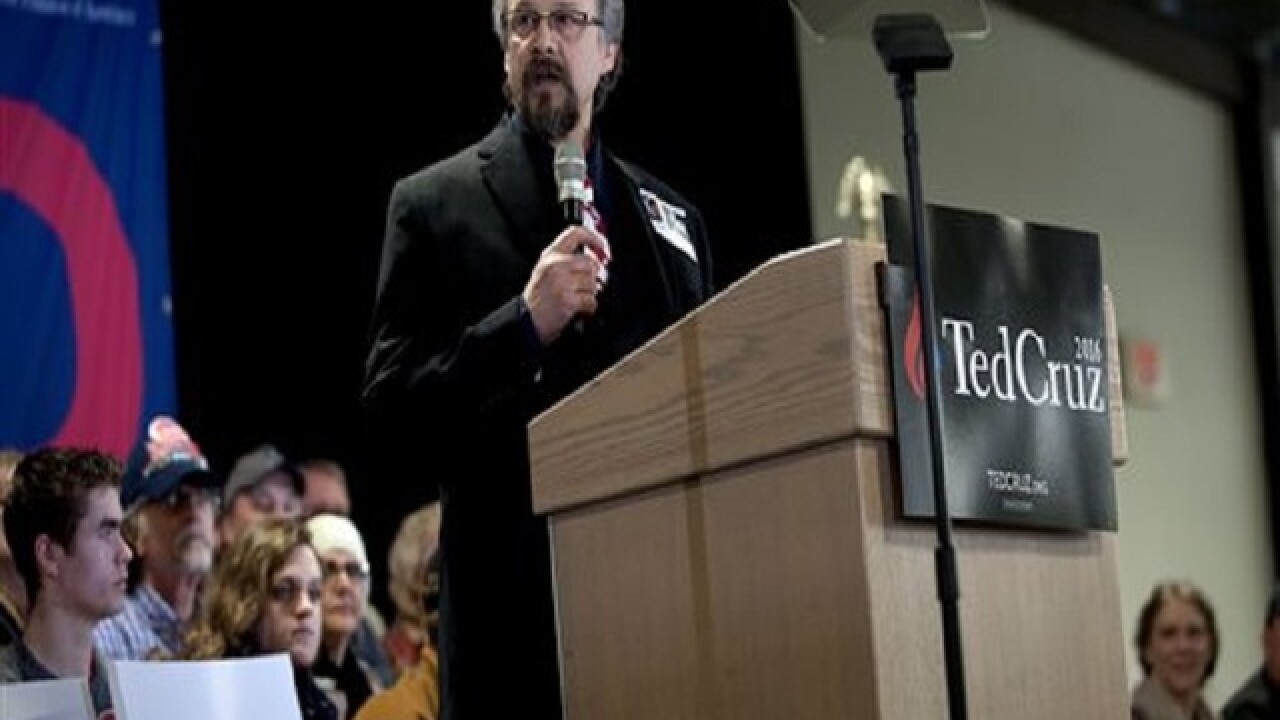 Kathy Plonka
<p>In a Saturday, March 5, 2016 photo, Coeur d'Alene pastor Tim Remington leads the prayer, during the rally for Republican presidential hopeful Ted Cruz at the Kootenai County Fairgrounds in Coeur d'Alene, Idaho. He was shot six times March 6 as he was leaving the Altar Church after Sunday services. (Kathy Plonka / The Spokesman-Review, via AP)</p>

By: Associated Press
Posted at 1:28 AM, Mar 09, 2016
COEUR D'ALENE, Idaho (AP) — The man suspected of shooting and seriously wounding an Idaho pastor last weekend was arrested by U.S. Secret Service agents Tuesday after he allegedly threw items over the fence at the White House, police said.
Meanwhile, Pastor Tim Remington, shot six times Sunday outside his church in Coeur d'Alene, has regained consciousness and is talking with his family, an associate said Tuesday.
Coeur d'Alene Police Chief Lee White said Kyle Odom was arrested at about 5:30 p.m. in Washington D.C., safely and without incident.
"I think everyone can breathe a good sigh of relief that at least this part of the case has come to a conclusion," White said.
White said he was told Odom threw computer flash drives and other unidentified items over the fence. Hazardous materials and bomb teams were working to identify the other items, he said.
Odom had been the subject of a search. White wasn't certain how the 30-year-old suspect got to Washington but said police were able to determine that he had boarded a flight at the Boise Airport sometime on Monday.
A former Marine from Coeur d'Alene, Odom is suspected of shooting Remington a day after Remington led the prayer at a campaign rally for Republican presidential candidate Ted Cruz.
Authorities say there's no indication Remington's appearance with Cruz had anything to do with the shooting, as they work to figure out what motivated the attack outside his church in broad daylight.
"However, it does appear that this was a pre-planned attack," White said Monday. "And I will tell you that some details surrounding Mr. Odom's planning are disturbing."
He did not elaborate.
Meanwhile, several news outlets in Spokane received letters on Tuesday that purported to be from Odom, Coeur d'Alene police Detective Jared Reneau said.
The letters, postmarked Monday, contained references to President Obama, members of Congress, members of the Israeli government, and John Padula, outreach pastor for The Altar Church, where Remington is the senior pastor.
"It was extensive and it was disturbing to us," White said of the manifesto.
Earlier Tuesday, Padula said Remington, 55, regained consciousness Monday night in a Coeur d'Alene hospital.
"He's whispering and talking to his family a little bit," Padula said. "He's doing absolutely amazing. He gave me a thumb's up last night when I went in."
Remington, who is married and has four children, has no feeling in his right arm, Padula said.
Remington and his wife have been with The Altar Church for nearly two decades, and they have specialized in the treatment of drug and alcohol addiction, Padula said. The church has extensive programs, including in-patient rehabilitation, for addicts, Padula said.
Padula was a meth addict for 17 years before going through the church's program seven years ago, he said.
Odom had no connection with the church before showing up before services early Sunday morning, Padula said.
The Coeur d'Alene Police Department had issued a warrant of attempted first-degree murder for Odom, who has no criminal record but does have a history of mental illness.
Police said Odom drove to the Spokane, Washington, area on Interstate 90 after the Sunday afternoon shooting, according to information from traffic cameras. He then turned south before they lost his trail.
White said Odom's car was found in Boise. He said he doesn't know how Odom was able to board a plane when police had issued the warrant for Odom's arrest.
White said Odom was armed when he attended services in the church earlier Sunday, and that the violence could have been much worse.
Odom served in the Marines from 2006-2010, winning an Iraq Campaign Medal and other awards. He rose to the rank of corporal.
Odom later graduated from the University of Idaho with a degree in biochemistry.
Associated Press 2016