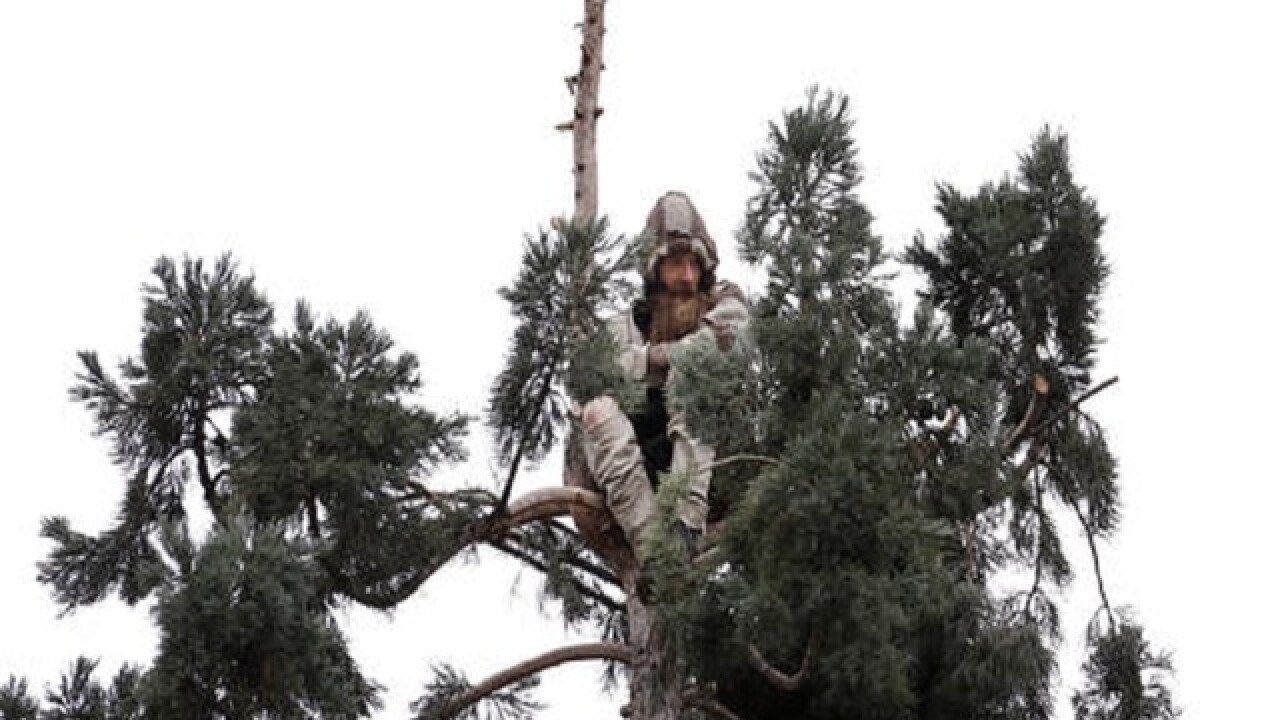 Elaine Thompson
<p>A man sits near the top of a sequoia tree Wednesday, March 23, 2016, in downtown Seattle. Authorities were alerted to the unidentified man in the tree Tuesday morning and he was still clinging to its branches nearly a day later. (AP Photo/Elaine Thompson)</p>

SEATTLE (AP) — A man who transfixed Seattle — and the Internet — by perching near the top of an 80-foot sequoia tree in a downtown shopping district for more than a day would not leave a jail cell for his first court appearance Thursday.
Cody Lee Miller, 28, was arrested on suspicion of malicious mischief after climbing down from the conifer Wednesday. A judge found probable cause to hold Miller while prosecutors decide whether to file charges and rescheduled a bail hearing for Friday.
Miller spent about 25 hours in the tree, ignoring police efforts to coax him down for much of it and hurling apples and branches at responders. The drama sparked intense interest online, with new Twitter accounts and the hashtag #ManInTree trending on Twitter and Facebook.
An urban forester with Seattle's Transportation Department and a certified arborist pegged damage to the tree at about $7,800, police said in a probable cause statement released Thursday.
Officials have not said if Miller is a member of the city's ballooning homeless population. But a police report said he was arrested on March 19 after being approached by a bicycle officer because he was sitting on the sidewalk in front of a Starbucks in the Capitol Hill neighborhood.
The officer arrested him for false reporting because he initially gave a fake name, the report said.
"The subject became agitated and began ranting about being harassed and wanting to leave," the officer wrote. "I explained to the subject that he is delaying his ability to walk away by his ranting about the United States of America's Bill of Rights."
Mayor Ed Murray declared a state of emergency as deaths of homeless people mounted last fall, and the city has authorized new tent cities and safe parking lots for those living without shelter or in their vehicles.
While Miller was in the tree, he at times appeared agitated, gestured wildly and threw what a police report described as "rock hard green pine cones." Police tried to speak with him from a firetruck ladder and the sixth-floor windows of the Macy's department store next door.
A local TV station live-streamed video of him as he dozed, shouted and knocked around a stick.
When Miller finally descended Wednesday, he was greeted by onlookers who cheered the safe resolution by chanting "Man in tree!" — in deference to the Twitter hashtag. He sat down and appeared to be eating a piece of fruit.
Officers initially kept their distance but soon approached Miller, got him on a gurney and took him to a hospital, where he received physical and mental evaluations, officials said.
Associated Press 2016