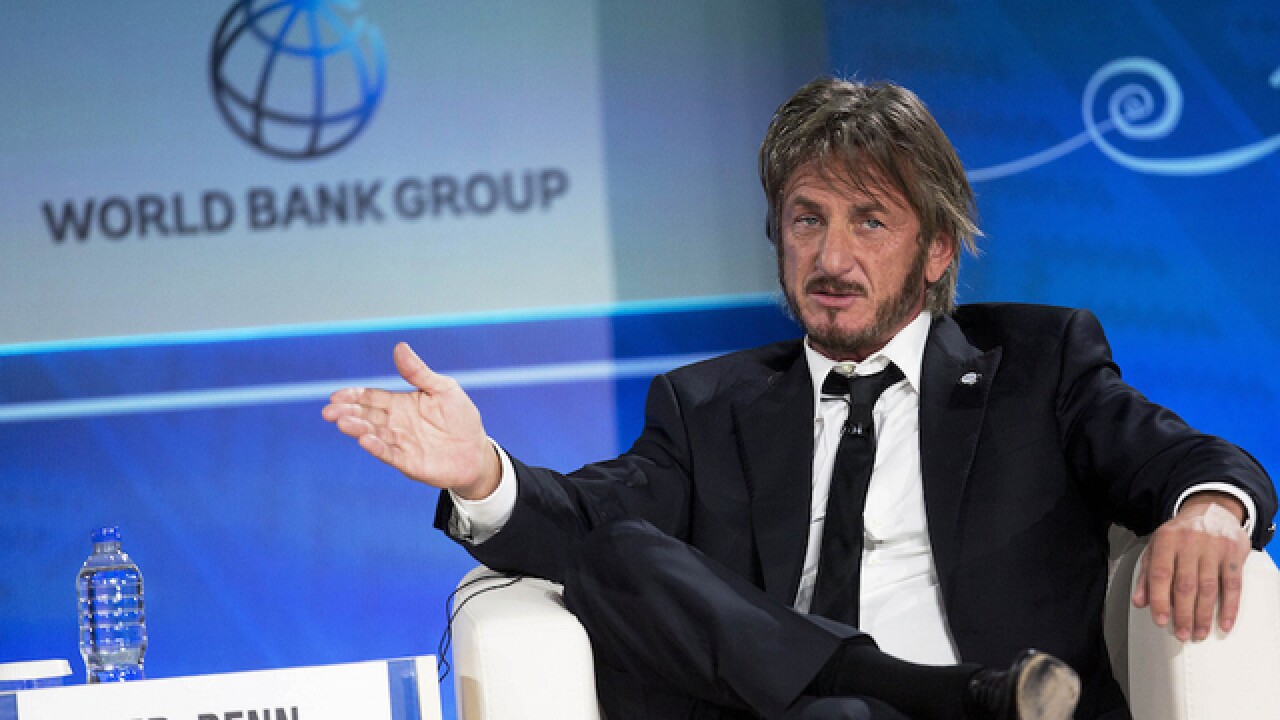 Rodrigo Abd
<p>FILE - In this Oct. 8, 2015 file photo, Sean Penn speaks during a forum with young entrepreneurs during the IMF and World Bank annual meeting in Lima, Peru. Late Saturday, Jan. 9, 2016, Rolling Stone magazine published an interview that Guzman apparently gave to Penn in his hideout in Mexico months before his recapture. In the article and interview, Penn describes the complicated measures he took to meet the legendary drug lord. (AP Photo/Rodrigo Abd, File)</p>

The recapture of drug lord Joaquin "El Chapo" Guzman took a surprise, Hollywood twist when a Mexican official said security forces located the whereabouts of the world's most-wanted trafficker thanks to a secret interview with U.S. actor Sean Penn.

Penn's interview with Guzman, who has twice escaped from Mexican maximum security prisons, appeared late Saturday on the website of Rolling Stone magazine. It was purportedly held at an undisclosed hideout in Mexico in late 2015, several months before Guzman's recapture Friday in Los Mochis, Sinaloa, after six months on the run.

In the interview, Guzman defends his work at the head of the world's biggest drug trafficking organization. When asked if he is to blame for high addiction rates, he responds: "No, that is false, because the day I don't exist, it's not going to decrease in any way at all. Drug trafficking? That's false."

In the article, Penn describes the elaborate security measures he took ahead of the clandestine meeting. But apparently they were not enough.

A Mexican federal law enforcement official, speaking on condition of anonymity because he was not permitted to comment on the issue, told the Associated Press it was the Penn interview that led authorities to Guzman in a rural part of Durango state in October.

Authorities decided not to open fire on Guzman at the time because he was with two women and child. He was able to escape, but they were able to later track him to a house in Los Mochis where Mexican marines nabbed him after a shootout that left five people dead.

The official said the meeting between Penn and Guzman was held in Tamazula, a community in Durango state that neighbors Sinaloa, home of Guzman's drug cartel.

On Friday, Mexican Attorney General Arely Gomez said that Guzman's contact with actors and producers for a possible biopic helped give law enforcement a new lead on tracking and capturing the world's most notorious drug kingpin.

In the Rolling Stone article, Penn wrote that Guzman was interested in having a movie filmed on his life. He said Guzman wanted Mexican actress Kate del Castillo, who facilitated the meeting between the men, involved in the project.

"He was interested in seeing the story of his life told on film, but would entrust its telling only to Kate," wrote Penn, who appears in a photo posted with the interview shaking hands with Guzman whose face is uncovered

There was no immediate response from Penn's representatives to the Mexican official's comments.

Earlier Saturday, a federal law enforcement official said that Mexico is willing to extradite Guzman to the United States, a sharp reversal from the official position after his last capture in 2014.

"Mexico is ready. There are plans to cooperate with the U.S.," said the Mexican official, who spoke on condition anonymity because he wasn't authorized to comment.

But he cautioned that there could be a lengthy wait before U.S. prosecutors can get their hands on Guzman, the most-wanted trafficker who was recaptured Friday after six months on the run: "You have to go through the judicial process, and the defense has its elements too."

Top officials in the party of President Enrique Pena Nieto also floated the idea of extradition, which they had flatly ruled out before Guzman's embarrassing escape from Mexico's top maximum security prison on July 11 — his second from a Mexican prison.

Following his capture, the head of the powerful Sinaloa Cartel was brought to Mexico City's airport, frog-marched to a helicopter before news media, and flown back to the same prison he'd fled.

There were immediately calls for his quick extradition, just as there were after the February 2014 capture of Guzman, who faces drug-trafficking charges in several U.S. states. At the time, Mexico's government insisted it could handle the man who had already broken out of one maximum-security prison, saying he must pay his debt to Mexican society first.

Then-Attorney General Jesus Murillo Karam said the extradition would happen only after he finished his sentence in Mexico in "300 or 400 years."

Then Guzman escaped on July 11 under the noses of guards and prison officials at Mexico's most secure lock-up, slipping out an elaborate tunnel that showed the depth of the country's corruption while thoroughly embarrassing Pena Nieto's administration.

He also escaped a different maximum-security facility in 2001 while serving a 20-year sentence. Lore says he hid in a laundry cart, though many dispute that version. He spent 13 years on the lam.

Gomez said that one of Guzman's key tunnel builders led officials to the neighborhood in Los Mochis, where authorities had been watching for a month. The team noticed a lot of activity at the house Wednesday and the arrival of a car early Thursday morning. Authorities were able to determine that Guzman was inside the house, she said.

The marines were met with gunfire as they closed in.

Gomez said Guzman and his security chief, Ivan Gastelum, a.k.a "El Cholo Ivan," were able to flee via storm drains and escape through a manhole cover to the street, where they commandeered getaway cars. Marines climbed into the drains in pursuit. They closed in on the two men based on reports of stolen vehicles and they were arrested on the highway.

What happens now is crucial for Guzman, whose cartel smuggles multi-ton shipments of cocaine and marijuana as well as manufacturing and transporting methamphetamines and heroin, mostly to the U.S.

According to a statement from the Mexican Attorney General's office, the U.S. filed extradition requests June 25, while Guzman was in custody, and another Sep. 3, after he escaped. The Mexican government determined they were valid within the extradition treaty and sent them to a panel of federal judges, who gave orders for detention on July 29 and Sept. 8, after Guzman had escaped.

Those orders were not for extradition but just for Guzman to begin the extradition hearing process. Now that he is recaptured, Mexico has to start processing the extradition requests anew, according to the law.

The quickest he could be extradited would be six months, said a federal official who spoke on condition of anonymity, but it's not likely because lawyers file appeals. He said that they are usually turned down, but each one means a judge has to schedule a hearing.

"That can take weeks or months, and that delays the extradition," he said. "We've had cases that take six years."