Mexico to extradite El Chapo to US 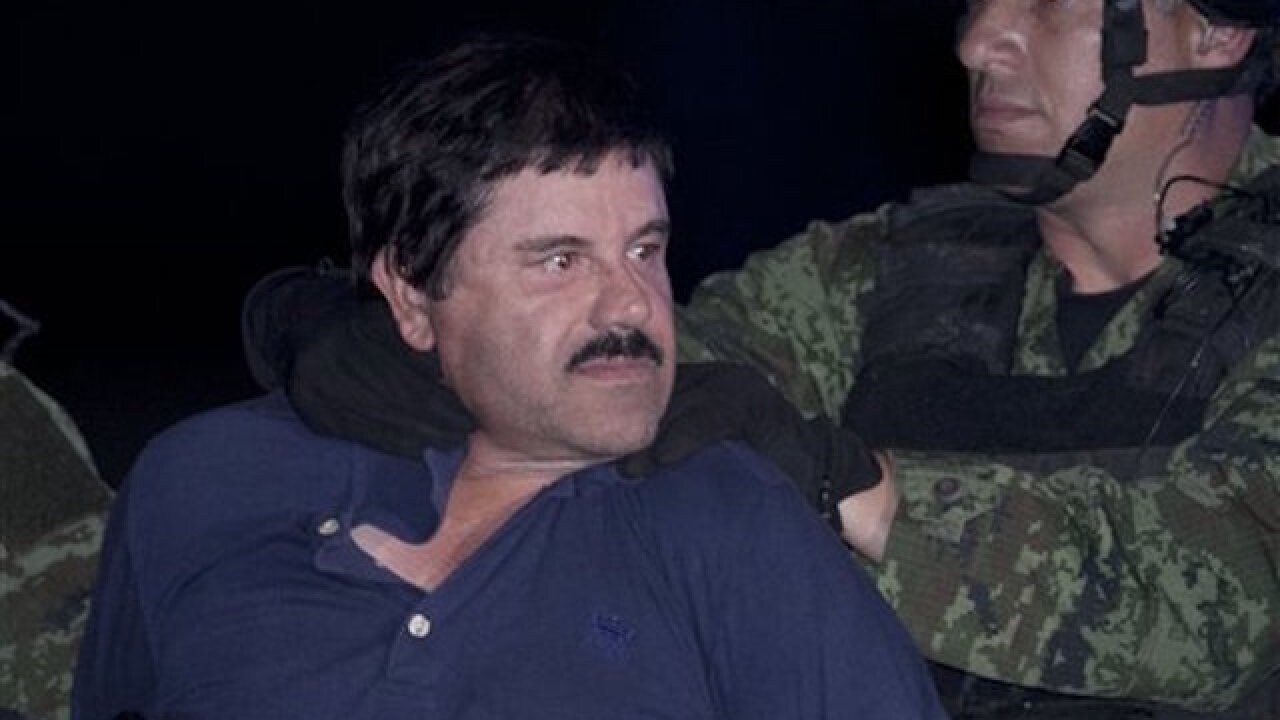 Marco Ugarte
<p>Joaquin "El Chapo" Guzman is made to face the press as he is escorted to a helicopter in handcuffs by Mexican soldiers and marines at a federal hangar in Mexico City, Mexico, Friday, Jan. 8, 2016. Mexican President Enrique Pena Nieto announced that Guzman had been recaptured six months after escaping from a maximum security prison. (AP Photo/Marco Ugarter)</p>

That process will probably take "one year or longer," the head of Mexico's extradition office, Manuel Merino, told Radio Formula on Monday. He said the process had lasted as long as six years, in one case because of legal challenges.

On Sunday, agents formally notified Guzman that he was wanted in the United States. In a statement, the Attorney General's Office said Mexican agents assigned to the international police agency Interpol served two arrest warrants to the drug lord, who is being held at the Altiplano prison following his capture by Mexican marines on Friday.

Guzman's defense now has three days to present arguments against extradition and 20 days to present supporting evidence, beyond the plethora of other appeals they have already started filing.

Guzman's powerful Sinaloa cartel smuggles multi-ton shipments of cocaine and marijuana as well as manufacturing and transporting methamphetamines and heroin, mostly to the U.S. He is wanted in various U.S. states and his July escape deeply embarrassed the government of President Enrique Pena Nieto and strained ties between the countries.

Badillo said that his client shouldn't be extradited to the U.S. because "our country must respect national sovereignty, the sovereignty of its institutions to impart justice."

Mexico's willingness to extradite Guzman is a sharp turnaround from the last time he was captured in 2014, when then-Attorney General Jesus Murillo Karam said the extradition would happen only after he finished his sentence in Mexico in "300 or 400 years."

Guzman was re-apprehended on Friday after a shootout between gunmen and Mexican marines at the home in Los Mochis, a seaside city in Guzman's home state of Sinaloa. Five suspects were killed and six others arrested. One marine was injured.

Mexican authorities say actor Sean Penn's contacts with Guzman helped them track the fugitive down — even if he slipped away from an initial raid on the hideout where the Hollywood actor apparently met him.

Penn's article on Guzman was published late Saturday by Rolling Stone magazine, a day after the drug lord's recapture. In it, Penn wrote of elaborate security precautions, but also said that as he flew to Mexico on Oct 2 for the meeting, "I see no spying eyes, but I assume they are there."

He was apparently right.

A Mexican federal law enforcement official, speaking on condition of anonymity because he was not permitted to comment on the issue, told the Associated Press the Penn interview led authorities to Guzman in the area of Tamazula, a rural part of Durango state.

They raided Guzman's remote hideout a few days after the interview and narrowly missed capturing Guzman following his July escape from Mexico's top security prison though a mile-long (1.5-kilometer) tunnel.

Describing the capture, Attorney General Arely Gomez said that investigators had been aided in locating Guzman by documented contacts between his attorneys and "actors and producers" she said were interested in making a film about him, though she did not name them.

Three months after that close call, marines finally caught him in a residential neighborhood of Los Mochis, where they'd been monitoring a suspected safe house. Guzman was able to escape via storm drains and exited a manhole in the street. But he was captured in a vehicle on the highway.

In the interview in Rolling Stone, Guzman defends his work at the head of the world's biggest drug trafficking organization, one blamed for thousands of killings. When asked if he is to blame for high addiction rates, he responds: "No, that is false, because the day I don't exist, it's not going to decrease in any way at all. Drug trafficking? That's false."

Penn wrote that Guzman was interested in having a movie filmed on his life and wanted Mexican actress Kate del Castillo, who had portrayed a drug trafficker in a television series, involved in the project.

"He was interested in seeing the story of his life told on film, but would entrust its telling only to Kate," wrote Penn, who appears in a photo posted with the interview shaking hands with Guzman.

Penn's representatives have not commented on the claims by Mexican officials.