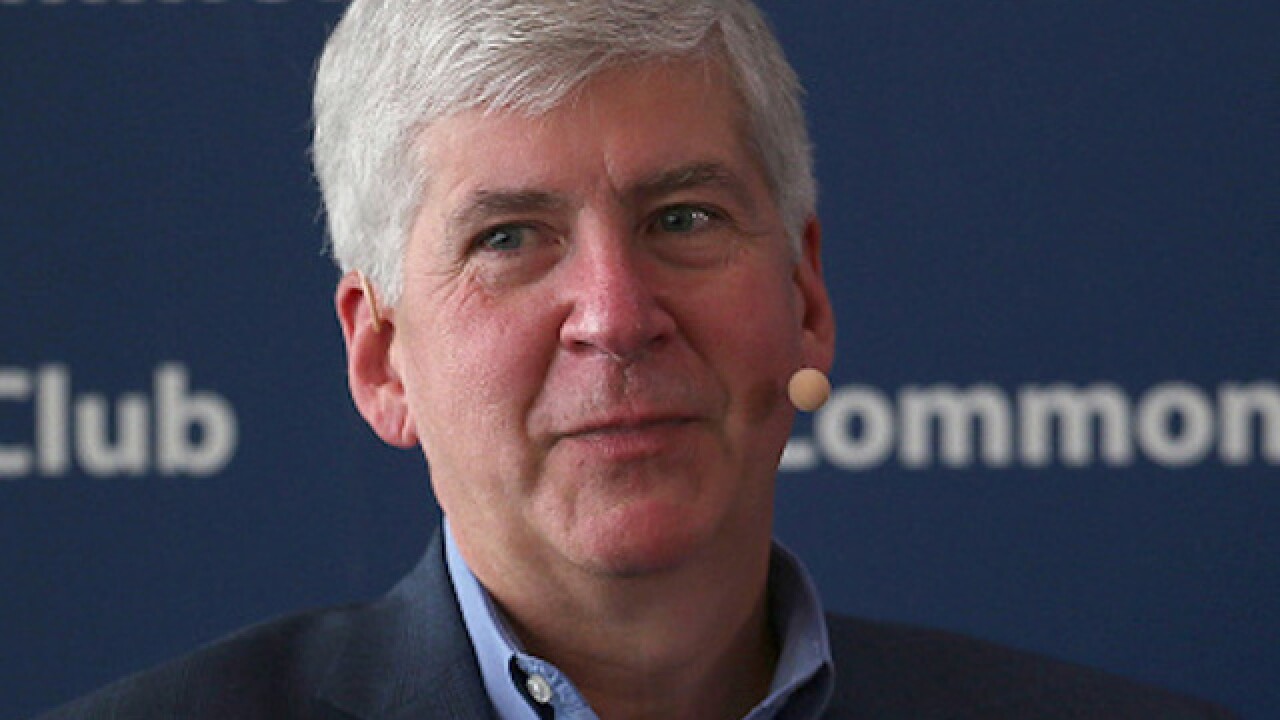 LANSING, Mich. (AP) — Only a year ago, Rick Snyder began his second term as Michigan governor promoting the same achievements that had propelled him to victory in 2014: The state was at last in the midst of an economic comeback, and Detroit had emerged from bankruptcy.

With the water crisis gripping Flint threatening to overshadow nearly everything else he has accomplished, the Republican governor again pledged a fix Tuesday night during his annual State of the State speech.

"We are praying for you, we are working hard for you and we are absolutely committed to taking the right steps to effectively solve this crisis," he said. "To you the people of Flint, I say tonight as I have before, 'I am sorry and I will fix it.'"

Snyder committed $28 million more in the short term, announced the deployment of more National Guard members to the city and promised to quickly release his emails regarding the crisis that has engulfed his administration with criticism from across the country.

He also announced his appeal of President Barack Obama's denial of a federal disaster declaration for the area and his aides pledged that, by the end of the week, officials would visit every household in Flint to ensure they have water filters.

Snyder devoted much of his 49-minute evening address to the GOP-led Legislature to the disaster, which has put residents at risk for lead exposure. Many of his other priorities — except the mounting financial problems in Detroit's state-overseen school district — were shelved from the speech due to the crisis. Snyder, who is exempt from public-records requests, plans to release his emails on Wednesday.

He outlined a timeline of the "catastrophe," blamed it on failures at the federal, state and local level but also said: "I let you down. You deserve better. You deserve accountability. You deserve to know the buck stops here with me."

The images of an impoverished city where no one dares to drink the tap water have put Snyder on the defensive and forced him to step up his efforts to help. The governor, who previously apologized for regulatory failures and for an underwhelming initial response, rejected calls for his resignation.

In recent weeks, he declared a state of emergency, pledged another round of unspecified state funding, activated the National Guard to help distribute lead tests, filters and bottled water, and successfully sought $5 million in federal assistance. But to many people, those steps took way too long.

The new round of funding, which requires approval from the GOP-led Legislature, is intended as another short-term step while Snyder works to get a better handle on the long-range costs. He plans to make a bigger request in his February budget proposal.

The $28 million would pay for more filters, bottled water, school nurses, intervention specialists, testing and monitoring. It also would replace plumbing fixtures in schools with lead problems and could help Flint with unpaid water bills.

The crisis began when Flint, about an hour's drive from Detroit, switched its water source in 2014 to save money while under state financial management. Michigan's top environmental regulator resigned over the failure to ensure that the Flint River water was properly treated to keep lead from pipes from leaching into the water.

Exposure to lead can cause behavior problems and learning disabilities in children and kidney ailments in adults. Elevated blood-lead levels were found in two city zip codes.

The fiasco has bruised Snyder, a former venture capitalist and computer executive who took office in 2011 billing himself as a practical decision-maker and a "tough nerd." When he sought the state's top job, he touted his experience as a turnaround artist committed to making government work better for people.

He cannot run again under term limits and has strayed from conservative orthodoxy on some issues, such as expanding Medicaid despite his party's stand against the health care overhaul and vetoing anti-abortion and gun-rights legislation.

Democrats have opposed many of Snyder's most sweeping laws, including a new emergency manager measure under which his administration has made budget decisions for struggling cities and school districts. They say what happened in Flint is an indictment of the GOP's promise to run government like a business.

"The state of our state is not strong when residents are being poisoned by their tap water," House Minority Leader Tim Greimel said.

The U.S. Justice Department is helping the Environmental Protection Agency investigate, and the state attorney general has opened his own probe, which could focus on whether environmental laws were broken or if there was official misconduct.