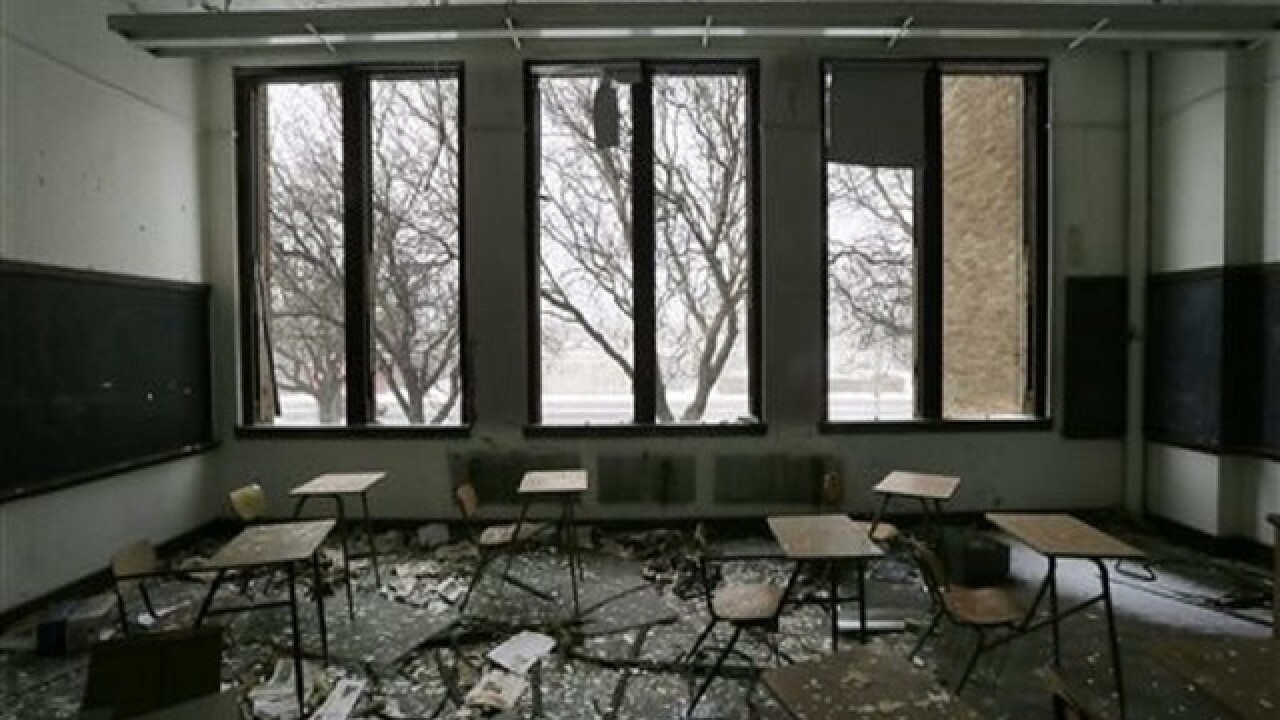 LANSING, Mich. (AP) — Michigan's governor signed a $617 million bailout and restructuring plan for Detroit's public schools on Tuesday, two years after the state committed money to help end the city's bankruptcy.
The debt-ridden Detroit Public Schools has been managed by the state for seven years, yet has continued to face plummeting enrollment, deficits and this year, teachers calling out sick in protests that closed numerous schools for several days.
"This marks a new day for Detroit families, with DPS free from debt and strong accountability measures for all schools in the city that promises a brighter future for all of Detroit's children," Republican Gov. Rick Snyder said in a written statement, nearly two weeks after the plan narrowly cleared the GOP-controlled Legislature.
Democrats, the teachers union and others opposed the plan, saying it won't do enough for the district's roughly 46,000 students and nearly 100 schools.
Under the new laws, the district will be divided on July 1, similarly to how Detroit-based General Motors was split into two companies after bankruptcy. The existing district will stay intact for tax-collection purposes to retire $617 million in debt over 8½ years, including $150 million for transitional startup costs to launch a new district and to ensure it has enough cash flow to operate.
The new district, which will receive the $617 million infusion of money to cover the lost tax revenue, will educate students. A new school board will be elected in November, and a commission of state appointees that oversees city budgets will also review the schools' finances.
Snyder signed the school rescue plan privately in his Lansing office, with House Speaker Kevin Cotter, two other GOP lawmakers and legislative staff at his side. It was a stark difference to the bipartisan harmony in 2014, when Snyder signed the $195 million bankruptcy bailout in Detroit as part of a "grand bargain" to help the city.
Opponents include Detroit Mayor Mike Duggan and a coalition of business and civic leaders who wanted a commission of mayoral appointees to regulate the opening of new schools — including independent, publicly funded charter schools that have drawn students and funding away from the district. Plans for such a commission were stripped out by legislators.
The district's state-appointed emergency manager, Steven Rhodes, has said the inclusion of $25 million to repair and maintain dilapidated school buildings was inadequate. Critics also opposed the legislation, saying it allowed for the hiring of uncertified teachers.
DPS spokeswoman Michelle Zdrodowski said Tuesday that the district will implement the legislation and "do the best job that it can for the children of the City of Detroit."
Snyder had warned lawmakers that bankruptcy would have been the worst possible outcome for Detroit children, the city's recovery and districts across the state left with billions of dollars in liabilities.
One of the new laws also calls for the state to develop an "A-to-F" grading system so Detroit parents can better decide which schools, whether traditional or charter, are the best.
Copyright 2016 The Associated Press. All rights reserved. This material may not be published, broadcast, rewritten or redistributed.