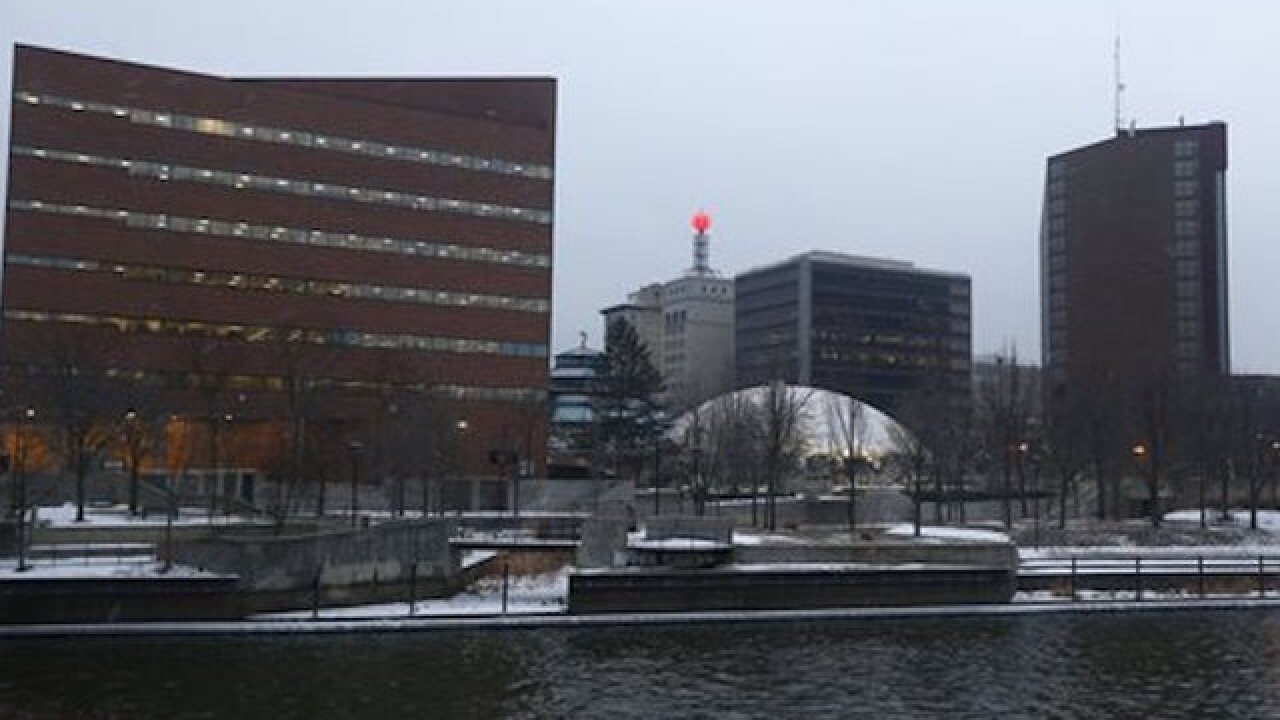 Copyright Associated Press
Paul Sancya
<p>Downtown Flint, Mich., is shown along the Flint River, Thursday, Jan. 21, 2016. Residents in the former auto-making hub ó a poor, largely minority city ó feel their complaints about lead-tainted water flowing through their taps have been slighted by the government or ignored altogether. For many, it echoes the lackluster federal response to New Orleans during Hurricane Katrina in 2005. (AP Photo/Paul Sancya)</p>

DETROIT (AP) — An advisory panel to Michigan Gov. Rick Snyder on Friday recommended steps the state should take to restore reliable drinking water to Flint, including hiring an unbiased third party to declare when the system is free of lead.

Separately, Snyder announced the suspensions of two employees of the state Department of Environmental Quality in connection with regulatory failures that led to the crisis.

The task force's recommendations came a day after the U.S. Environmental Protection Agency told the state and city that their efforts so far had failed. The agency ordered them to protect public health and act to ensure Flint's water system is made safe.

The Flint Water Advisory Task Force said its recommendations are more detailed and comprehensive than what the EPA ordered.

"We'll move as quickly as possible to determine the best way to achieve the results," Snyder said in a statement. "The Flint water crisis is the result of missteps of government at all levels — city, state and federal. We're focused on fixing the problems and making sure nothing like this happens again in Flint or any other Michigan city."

High levels of lead have been detected in Flint's water since officials switched from the Detroit municipal system and began drawing from the Flint River as a cost-saving measure in April 2014. Some children's blood has tested positive for lead, a potent neurotoxin linked to learning disabilities, lower IQ and behavioral problems.

The panel recommendations included working with the EPA staff on a comprehensive lead-sampling program and seeking help from the federal Centers for Disease Control and Prevention in assessing an outbreak of Legionnaires' disease and its cause.

"To help address both the technical issues facing Flint, as well as the public-trust issues, we believe it is imperative to have the right people and organizations involved," task force Co-Chairman Chris Kolb said. "Until the public trust starts to build, this crisis will continue."

A regional director of the EPA resigned in connection with the drinking water crisis on Thursday, the same day the agency's chief issued the emergency order directing state and city officials to take action to protect public health.

The EPA said Susan Hedman, head of the agency's regional office in Chicago whose jurisdiction includes Michigan, was stepping down Feb. 1 so the EPA could focus "solely on the restoration of Flint's drinking water."

While much of the blame has been directed at Snyder and state officials, particularly the Michigan Department of Environmental Quality, some have faulted the EPA's Region 5 office for not acting more forcefully.

"Some DEQ actions lacked common sense, and that resulted in this terrible tragedy in Flint," Snyder said.

The EPA has also released a letter from EPA Administrator Gina McCarthy to Snyder outlining terms of the agency's order.

Among other requirements, the EPA said the city should: Submit plans for ensuring that Flint's water has adequate treatment, including corrosion controls; ensure city personnel are qualified to operate the water system in a way that meets federal quality standards; and create a website where the public can get information.

The agency also said it would begin sampling and analyzing lead levels and would make the results public.