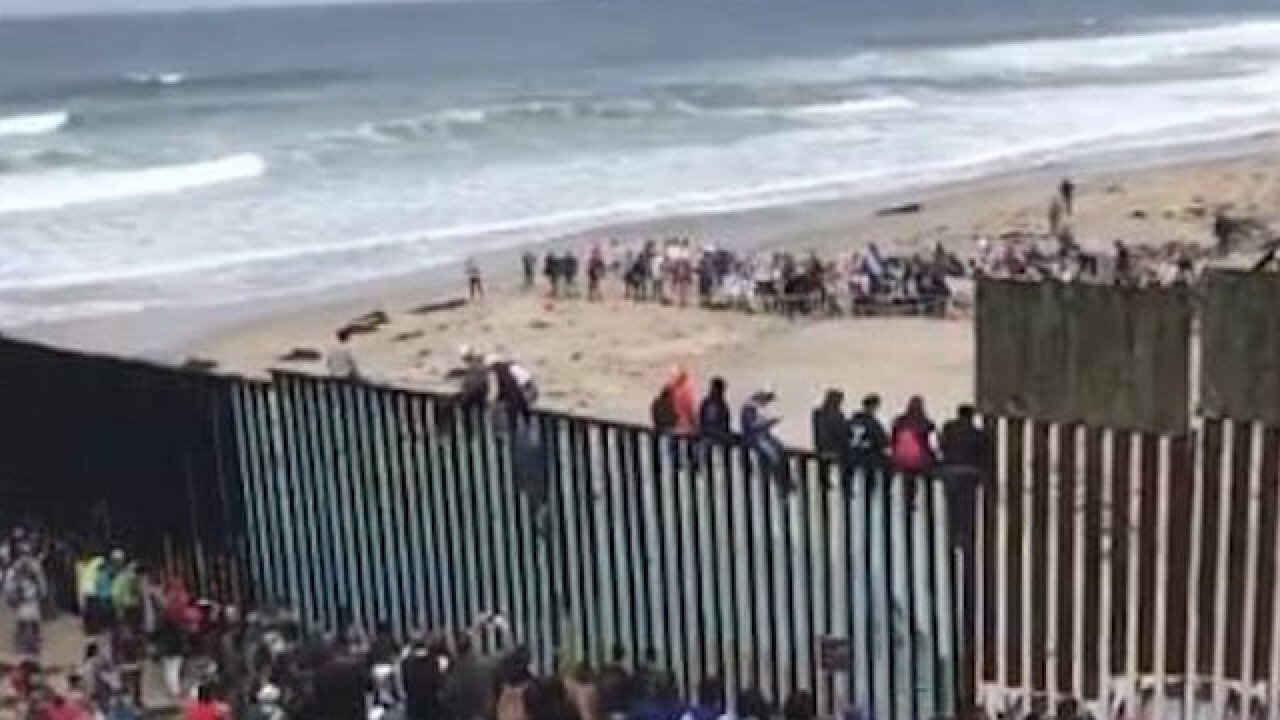 © 2018 Cable News Network, Inc.
Khushbu Shah/CNN
<p>The migrants are expected to march toward the border and then ask for asylum in the United States.</p>

After a difficult, monthlong journey from Central America to the US-Mexico border, dozens of asylum-seeking migrants are vowing to remain outside an immigration processing center until "every last one" is admitted into the country, an organizer with the caravan said late Sunday.

Earlier, the migrants marched from Friendship Park in Tijuana, Mexico to the San Ysidro port of entry. They stood on the Mexican side; on the other side lay San Diego, California. It was the final leg for some in the caravan of hundreds of migrants, which had reached Tijuana on Tuesday.

Alex Mensing, an organizer with Pueblo Sin Fronteras, which assembled the caravan, said 50 migrants were admitted to the immigration processing center on the Mexico side. However, that is incorrect. The migrants congregated on a bridge leading to the US border while waiting to be processed by American officials.

Before the group arrived, US Customs and Border Protection officials said the port had already reached full capacity, and migrants trying to get into the United States may need to wait in Mexico as officials process those already in the facility.

Some migrants said they had walked the last leg of the journey filled with anxiety. Others scarfed down food before they filed into the center, afraid there would be no food once they turned themselves in to border officials.

One woman in a wheelchair said she was leaving a part of herself in Mexico. She didn't know where she was going, just that she was going to the United States, she said.

In anticipation of the final march of a trip that has riled President Donald Trump, supporters lined both sides of the border on Sunday.

The migrants say they want a better life for themselves and their children, safe from violence and poverty in their home countries. The caravan is both a humanitarian and an activist mission, as organizers created the event to draw greater attention to the migrants' plight.

One such migrant is Gabriela Hernandez, a pregnant mother of two who fled Honduras and crossed Guatemala into Mexico to join the group heading north. She and her two sons left behind their friends and family and battled hunger and exhaustion along the monthlong journey.

"There are people who think I just woke up and said, 'Oh, I want to just go to the United States.' It's not that easy," she said.

Isabel Rodriguez, 52, traveled with her two grandchildren, Anderson, 7, and Cristofer, 11, from El Salvador with the caravan over several weeks. She said she was grateful to be in Tijuana but was worried about what's ahead.

"I hear they are separating people who are not parents of children," she said, "but I am ready to get to the border."

Why this caravan is unlike others

Similar migrant caravans have ventured toward the US border for the last several years. But this trip has become better known because of critical tweets from Trump and the heightened controversy surrounding immigration policy.

Trump has encouraged Mexico to break up the caravans and tweeted that he would not accept the migrants into the country.

"I have instructed the Secretary of Homeland Security not to let these large Caravans of people into our Country. It is a disgrace. We are the only Country in the World so naive! WALL," Trump wrote.

"If members of the 'caravan' enter the country illegally, they will be referred for prosecution for illegal entry in accordance with existing law," Department of Homeland Security Secretary Kirstjen Nielsen said in a statement.

Chief Patrol Agent Rodney S. Scott of the US Customs and Border Protection said several groups of people associated with the caravan illegally entered the United States by climbing over a metal fence.

"We are a very welcoming country but just like your own house, we expect everyone to enter through our front door, and answer questions honestly," he said in a statement.

It is not illegal to enter the country at a port of entry and ask for asylum, as international law requires that the United States consider asylum claims. The migrants say they're not planning to sneak across the border, but to turn themselves in peacefully and ask for asylum.

"People who have a legitimate fear of persecution under US law have a right to present their case," Rep. Zoe Lofgren, the top Democrat on the House subcommittee on immigration, said on Monday. "That's not a violation of immigration law. That's a part of immigration law."

In general, having asylum granted is difficult. More than three-quarters of immigrants seeking asylum from El Salvador, Honduras and Guatemala between 2011 and 2016 lost their cases, according to immigration court statistics published by Syracuse University's Transactional Records Access Clearinghouse.