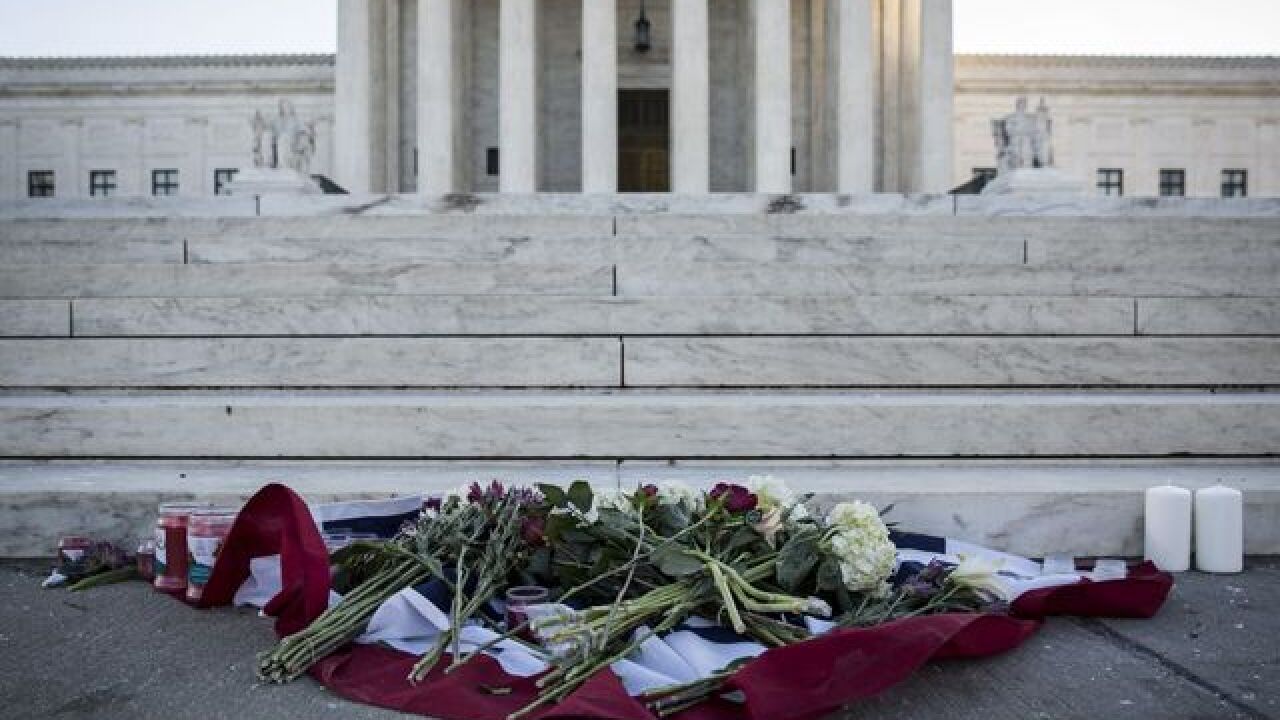 WASHINGTON (AP) — In a day of ceremony and tribute, the casket carrying Justice Antonin Scalia will lie in repose at the Supreme Court where he spent nearly three decades as one of its most influential members.

As of 9:39 a.m., Scalia's flag-draped casket had arrived at the Supreme Court where it will lie in repose on Friday. Supreme Court police served as pallbearers to carry the casket up the marble steps into the court's Great Hall.

The procession passed between two long lines of Scalia's former law clerks that stretched from the plaza to the court's main entrance. Another group of 12 former clerks serving as honorary pallbearers followed.

The procession passed before the court's eight current justices and the casket was placed on the Lincoln Catafalque. That's the same platform on which President Abraham Lincoln's coffin once rested at the Rotunda of the Capitol in 1865.

Thousands of mourners — from the president and members of Congress to former justices and tourists — will pay their respects to Scalia on Friday.

The justice's former law clerks will take turns standing vigil by their former boss throughout the day and night in a tradition most recently observed after the 2005 death of former Chief Justice William Rehnquist.

President Barack Obama and first lady Michelle Obama planned to pay their respects at the court on Friday, while Vice President Joe Biden and his wife Jill Biden were to attend Scalia's funeral Mass on Saturday.

The funeral Mass open to family and friends will take place Saturday at 11 a.m. at the Basilica of the National Shrine of the Immaculate Conception in Washington. Burial plans have not been released.

In a departure from tradition, the court's current and former justices won't be lining the marble steps outside the court as the casket is carried through the main entrance. They will instead be waiting inside. Court spokeswoman Kathy Arberg did not explain the reason for the change.

Scalia's sudden death complicated an already tumultuous election year. Senate Majority Leader Mitch McConnell says a replacement should not be named until the next president takes office. Obama pledged to pick a replacement "in due time" and challenged Republicans to hold a vote on his nominee.

Scalia was found dead on Saturday in his room at a remote Texas hunting resort. The 79-year-old jurist was appointed to the court in 1986 by President Ronald Reagan.

He is survived by his wife, Maureen, nine children and 36 grandchildren.