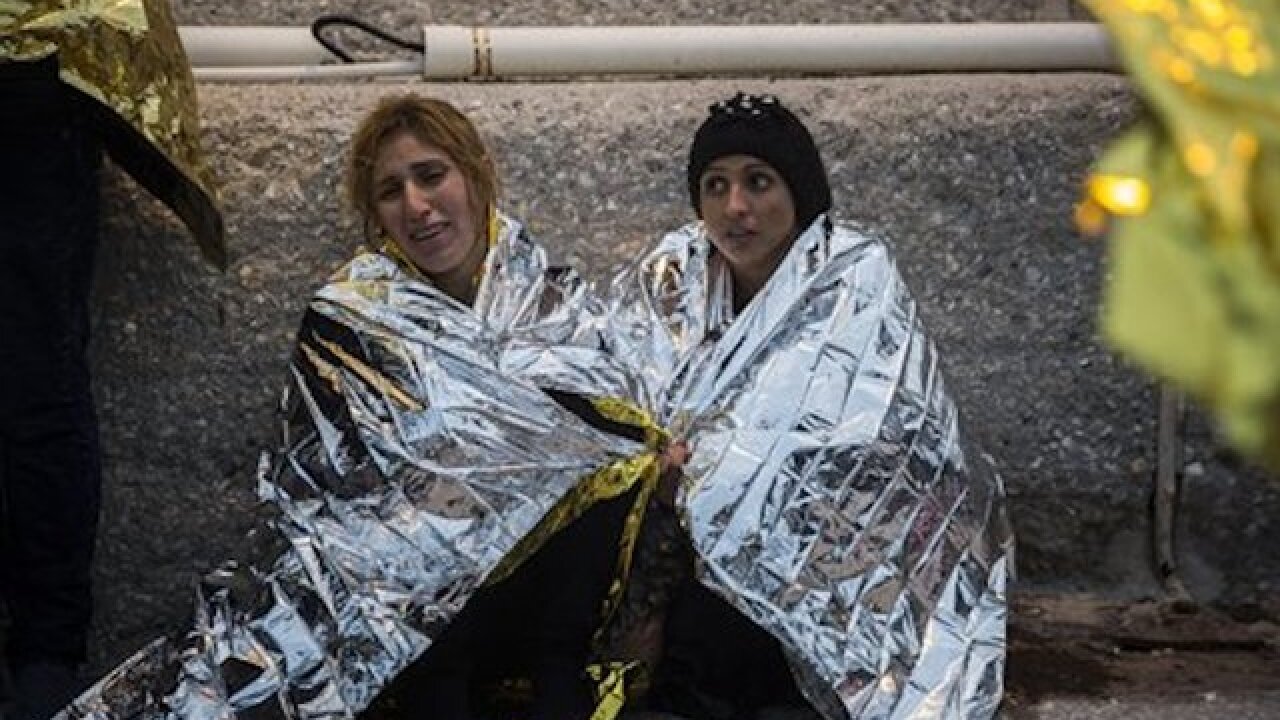 Copyright Associated Press
Santi Palacios
<p>Women wearing thermal blankets react after being rescued, when their boat sank, along with some dozens of other migrants and refugees aboard, on their way from Turkey to the Greek island of Lesbos, at the port town of Petra, Lesbos, Greece, on Wednesday, Dec. 16, 2015. Greek authorities say two people have drowned and 83 others have been rescued after a wooden boat crammed with refugees sank in the Aegean Sea off the eastern Greek island of Lesbos. (AP Photo/Santi Palacios)</p>

ANKARA, Turkey (AP) — Authorities recovered the bodies Tuesday of at least 36 migrants who drowned off Turkey after their boats overturned in rough waters as they tried to reach the Greek island of Lesbos, officials and news reports said. Twelve others were rescued.

Nine bodies, including those of children, washed up on a beach in the resort town of Ayvalik early in the morning, prompting authorities to dispatch coast guard boats and gendarmerie officials to search the area by sea and by land for possible survivors.

Seven other bodies were washed up on a shore at Dikili, a resort about 50 kilometers (30 miles) south of Ayvalik, the victims of a second migrant tragedy, the private Dogan news agency reported. The dead included women and children, the agency said.

By late afternoon, the gendarmerie forces had recovered a total of 29 bodies in the area while seven others were found by the coast guards, a Coast Guard statement said, without providing details.

Around 850,000 migrants and refugees crossed into Greece last year, paying smuggling gangs to ferry them over from Turkey in frail boats.

Undeterred by the bitter cold and the rough winter seas, migrants are continuing to risk the journey to Greece in the hope of a better future in Europe. Most of them are Syrian refugees escaping the civil war.

The International Organization for Migration estimates that 3,771 migrants overall died while trying to cross the Mediterranean Sea to Europe last year. It says that makes it the deadliest year on record for migrants crossing the Mediterranean, with the number of deaths rising from 3,279 in 2014.

The IOM said 2,892, or 77 percent, of the deaths last year were on the central Mediterranean route, mainly involving people crossing from Libya. However, there were 805 deaths in the eastern Mediterranean, accounting for 21 percent of the total. That's 1 percent more than the previous year, reflecting the increasing popularity of that route.

Sweden introduced ID checks on all people entering from Denmark, and Denmark tightened border controls on its border with Germany on Monday for at least 10 days, citing concerns about public security because of migrant movements and border measures taken by other EU member states.

In Turkey, Namik Kemal Nazli, the local administrator for Ayvalik, told the state-run Anadolu Agency that the victims of the first incident are believed to be from Iraq, Algeria and Syria. There was no information on the nationalities of those drowned in the second incident.

A body with a lifejacket was pulled from the sea onto the beach at Ayvalik by a fisherman and a military police official, Dogan news agency video footage showed. Other bodies, also in lifejackets, were seen lying nearby.