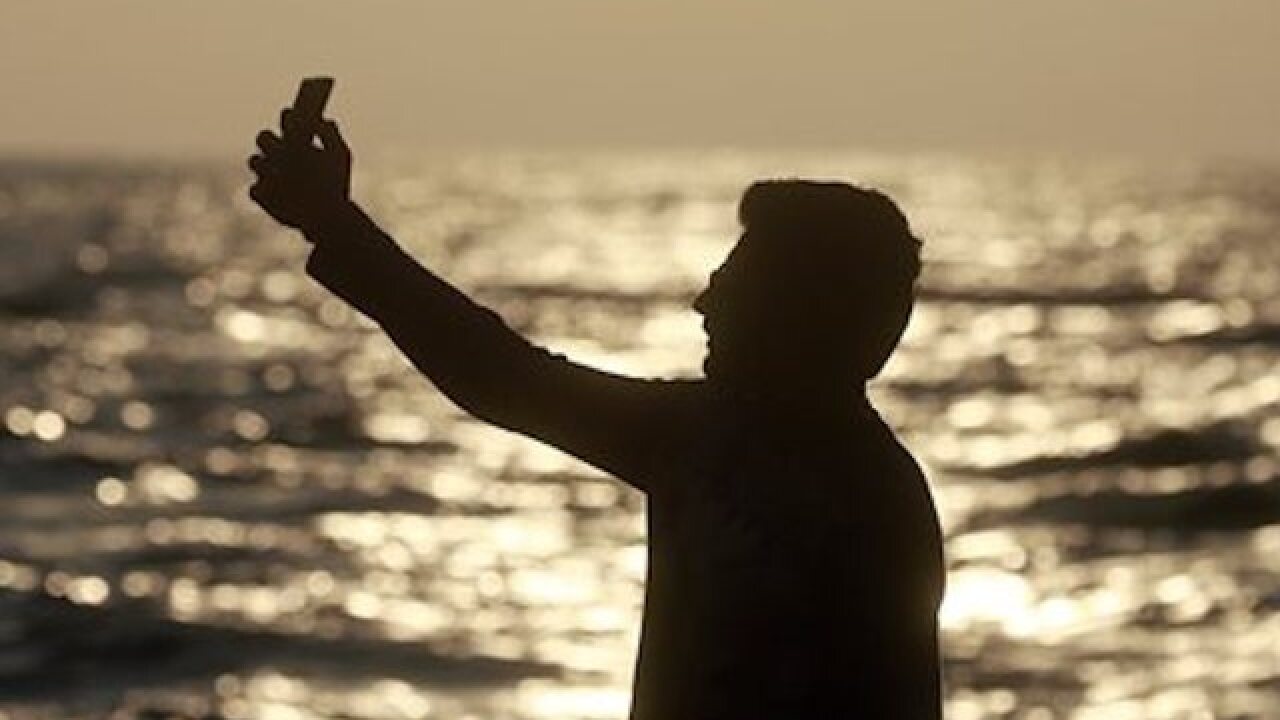 Copyright Associated Press
Rafiq Maqbool
<p>In this Feb. 22, 2016, photo, an Indian man takes a selfie in Mumbai's coastline. India is home to the highest number of people who have died while taking photos of themselves, with 19 of the worldís 49 recorded selfie-linked deaths since 2014, according to San Francisco-based data service provider Priceonomics. The statistic may in part be due to Indiaís sheer size, with 1.25 billion citizens and one of the worldís fastest-growing smartphone markets. (AP Photo/Rafiq Maqbool)</p>

MUMBAI, India (AP) — Look around in any major Indian city, and you will find someone with an arm outstretched, mobile phone in hand, smiling widely and clicking away. Even Prime Minister Narendra Modi has embraced the medium, posting pictures online he's snapped with various world leaders.

But the pursuit of the most epic selfie can have lethal consequences.

India is home to the highest number of people who have died while taking photos of themselves, with 19 of the world's 49 recorded selfie-linked deaths since 2014, according to San Francisco-based data service provider Priceonomics. The statistic may in part be due to India's sheer size, with 1.25 billion citizens and one of the world's fastest-growing smartphone markets.

Alarmed by the trend, Mumbai has declared 16 no-selfie zones across the city, as authorities warn people against taking unnecessary risks.

Earlier this month, an 18-year-old college student on a class picnic lost his balance while taking a selfie atop a rock near a dam near the central Indian city of Nashik. He fell into the water and drowned, along with a classmate who jumped in to try and save him.

Last month, an 18-year-old woman fell and drowned in the sea while taking a photo of herself at Mumbai's Bandstand Fort, a popular tourist spot.

An engineering student sustained fatal head injuries when a rock he was standing cracked and sent him tumbling. He'd been trying to take a selfie with friends in front of the Kolli Hills in Tamil Nadu.

And in January 2014, three students aged 20 to 22 died when they stopped to take a photo with a speeding train approaching, and were hit. They'd been on their way to visit the Taj Mahal.

In Mumbai, police have declared selfies off-limits in areas perceived as risky — particularly along the coastline in spots with no railings or barriers. Anyone venturing into off-limits areas, even if they take no photos, risks being slapped with a fine of 1,200 rupees, or about $18.

Despite clearly marked signs demarking the selfie-free zones, people can still be seen clicking away, and often going to the edges or standing on ledges to get the most thrilling shots.

"When you are traveling alone, and do not have anyone to take your pictures, then it's only selfie," said Murtuza Rangwala, a student in Mumbai.

Mumbai psychologist Keerti Sachdeva said she doesn't expect the constant pursuit of selfies to end any time soon, saying one probable reason is the need for acceptance and love.

"You know people have this sort of feeling in adolescent age, especially that they need to get this acceptance from everyone, that I am a smart person, I am a good-looking person," Sachdeva said. "So for acceptance and recognition they are indulging in taking of selfies."