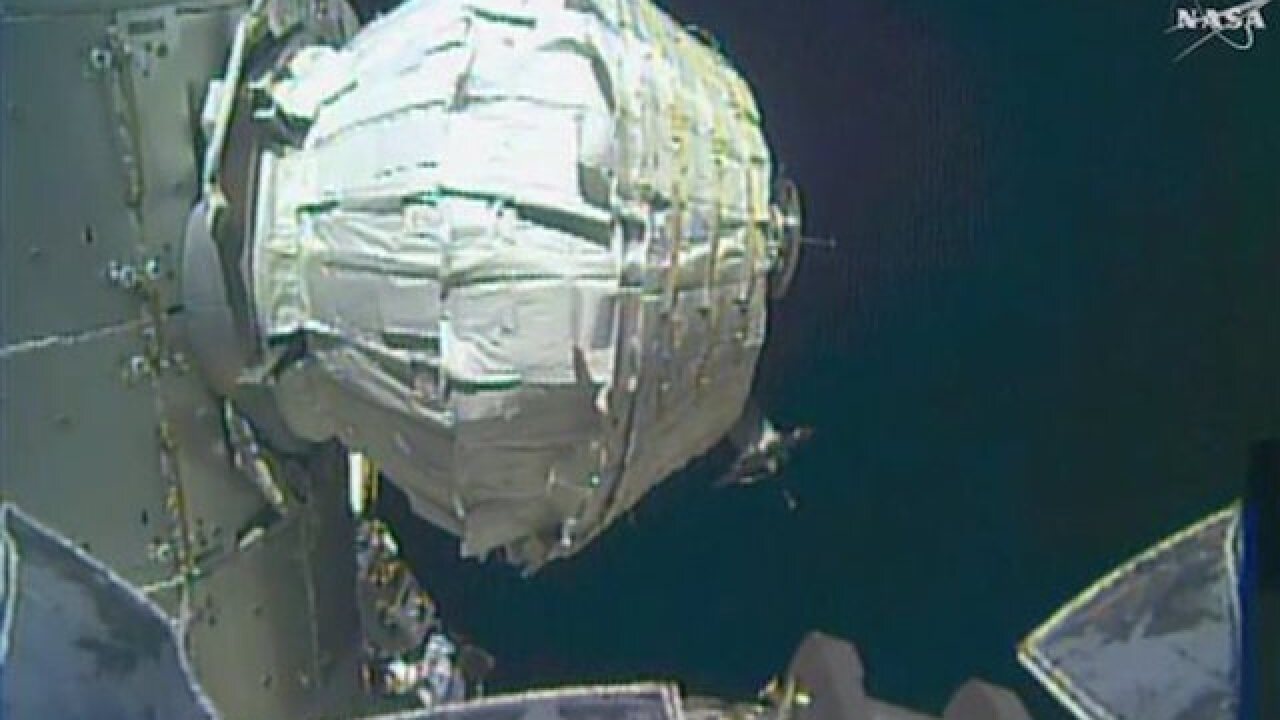 Copyright Associated Press
<p>In this image provided by NASA, the Bigelow Expandable Activity Module, or BEAM, continues to be inflated, Saturday, May 28, 2016. NASA slowly inflated the new experimental room at the International Space Station on Saturday, with better luck than the first try two days earlier. (NASA via AP)</p>

Astronaut Jeffrey Williams repeatedly opened and closed a valve, allowing air to flow from the space station into the compartment, looking more and more like a giant marshmallow-y pod.

It was tedious work. Five hours into the operation, Williams had opened the valve 16 times and allowed a minute of air, all told, to rush in. Mission Control reported more than three feet of growth in the length of the structure, the first of its kind for space fliers. But there were still a couple more feet to go.

The Bigelow Expandable Activity Module, or BEAM, barely expanded during Thursday's inflation attempt. Experts believe the soft-sided compartment was packed up tight for so long before last month's launch that the fabric layers had trouble unfolding.

Pressure inside the chamber was relieved Friday to ease the friction among the multiple layers. Engineers hoped that would enable it to stretch to its full 13 feet in length and 10 ½ feet in diameter — the volume equivalent to a small bedroom.

This time, Williams heard popping noises as pressure built up inside BEAM — like popcorn in a frying pan. That's actually good news; officials said it was the sound of internal straps releasing as the pod swelled in both length and girth.

NASA insisted on taking it slow to avoid a sudden pressurization of BEAM that could stress the connecting parts of the space station.

Bigelow Aerospace provided this first inflatable room ever built for astronauts. NASA paid $17.8 million for the technology demo, which could lead to an even bigger inflatable room at the space station.

Hotel entrepreneur Robert Bigelow, who runs the North Las Vegas aerospace company, considers BEAM a test bed for future inflatable habitats for tourists orbiting Earth as well as astronauts on the moon or Mars. He's working to fly a pair of private inflatable stations in another few years.

Because expandable spacecraft can be compressed for launch, the rockets can carry more cargo, yet space travelers can still enjoy lots of room. The standard aluminum rooms that make up the space station — essentially fancy cans — can never be larger than what fits into a rocket.

The space station's six astronauts won't enter BEAM for at least a week, with the hatch remaining sealed. NASA wants to make certain it's airtight before letting anyone inside. Even then, it will be off limits most of the time given its experimental status.

BEAM — empty except for sensors — is supposed to stay attached to the orbiting lab for two years so engineers can measure temperature, radiation levels and its resistance to space debris impacts.

SpaceX delivered BEAM early last month, and it was installed on the outside of the 250-mile-high outpost. Launch delays kept it grounded an extra half-year.