Neighbor tried to save baby after Texas twister 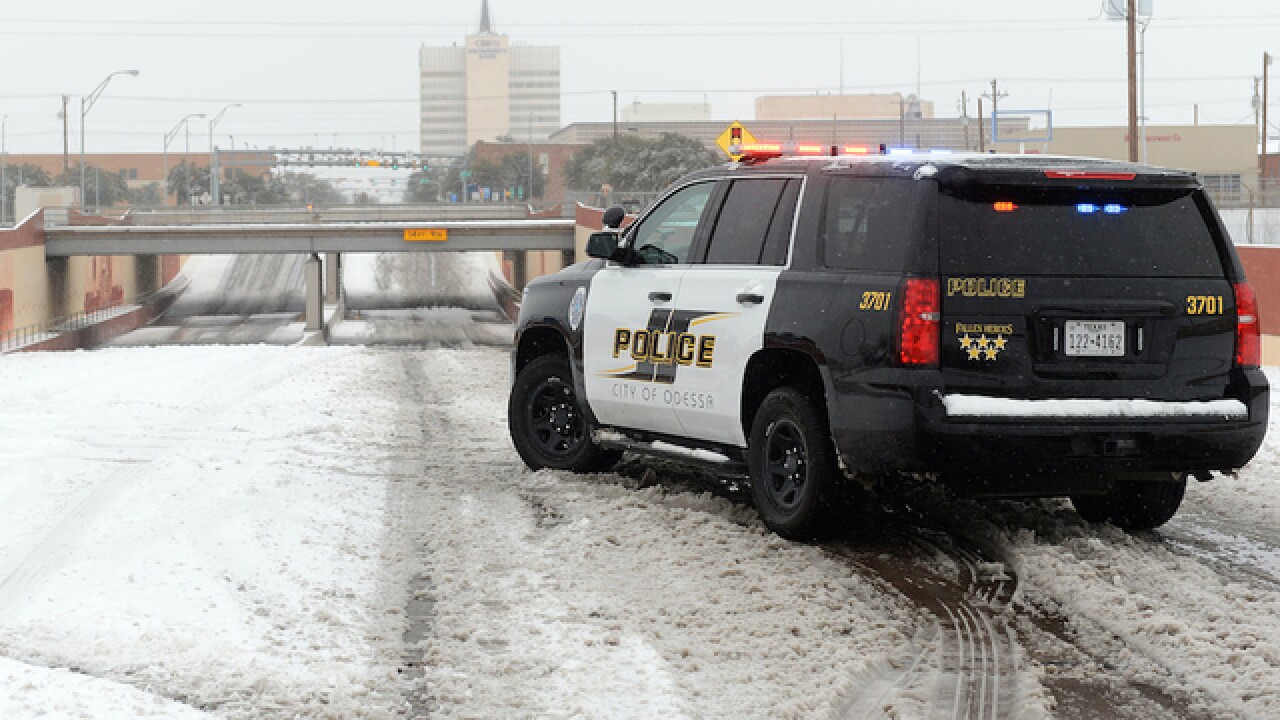 Copyright Associated Press
Mark Sterkel
<p>Odessa Police block access to the railroad underpass on Grant Avenue near Second Street, Sunday, Dec. 27, 2015, in Odessa, Texas. Nearly all of Interstate 40 in Texas, the main east-west highway through the Texas Panhandle, has been shut because of the snowstorm pummeling the area. The Texas Department of Public Safety says only a small section of the highway within Amarillo is not closed. (Mark Sterkel/Odessa American via AP)</p>

BLUE RIDGE, Texas (AP) — The winds had finally calmed when Debralee King and her husband ventured out to check on their horses and see what damage the tornado had caused. Then she heard a scream.

King saw her neighbor, Jose Daniel Santillano — shirtless and shoeless — running toward her with his newborn daughter in his arms. The child was gravely injured. Her tiny hand was cold.

"He wanted me to take her to the hospital," King said. "He was frantic. His wife was still trapped."

With that, King was thrust into the unsuccessful effort to save the likely youngest victim of a powerful line of weekend storms that spawned multiple tornadoes, destroyed several hundred homes and displaced residents throughout Dallas' suburbs.

At least 11 people died and dozens were injured in the tornadoes that swept through the area on Saturday, pushed by a powerful storm system that continued to hit the nation's midsection on Monday with heavy snow, ice, rain, flooding and blustery winds. More than 2,800 flights nationwide were canceled Monday — more than half of them at Chicago's two main airports — but that had dropped to 600 by Tuesday morning.

Deaths also were attributed to the recent weather in Missouri, Oklahoma and Arkansas, and governors declared disaster declarations in numerous states. Although the weather was expected to fade, more flooding was expected along the swollen Mississippi River on Tuesday.

In Texas, officials estimated as many as 1,450 homes in the northern part of the state were damaged or destroyed by at least nine tornadoes. The National Weather Service has said an EF-4 tornado — the second-most powerful with winds up to more than 200 mph — hit the northeast Dallas suburb of Garland.

Authorities believe the city's eight tornado victims died when their vehicles were thrown from overpasses in the area of Interstate 30 and the George Bush Turnpike, a major route in the region.

"I've never seen anything like this, with this scale of destruction," Police Chief Mitch Bates said Monday.

In Blue Ridge, a tiny town north of Dallas, King said she tried to save her neighbor's newborn daughter during the chaos. King said she and another neighbor got in a vehicle with the infant, Aleya, and began driving.

They found a game warden about five minutes away. He called paramedics and began CPR until an ambulance arrived, according to King and Captain Jim Moody of the Collin County sheriff's department.

After Santillano, the infant's father, handed over the child, he rushed back to the mobile home he shared with his wife and three older children, King said. King said she said she couldn't see through the darkness to know then that the trailer had been blown about 50 feet off its base and laid in a pile of wood and aluminum.

First responders showed up and took the husband and wife to a hospital, where he was listed in good condition and she was in critical condition as of Monday. A local church has offered to house the family as they recover.

In nearby Garland, Jacqui Gordon spent Monday sifting through the debris that had been her home. Amid frigid weather, she searched for old family photographs — especially of her father, who died two years ago.

She and nine others were enjoying a holiday gathering when winds began to rattle her home in the Dallas suburb. They dashed into closets and suffered only bumps and bruises, but Gordon's roof was torn away and her house destroyed.