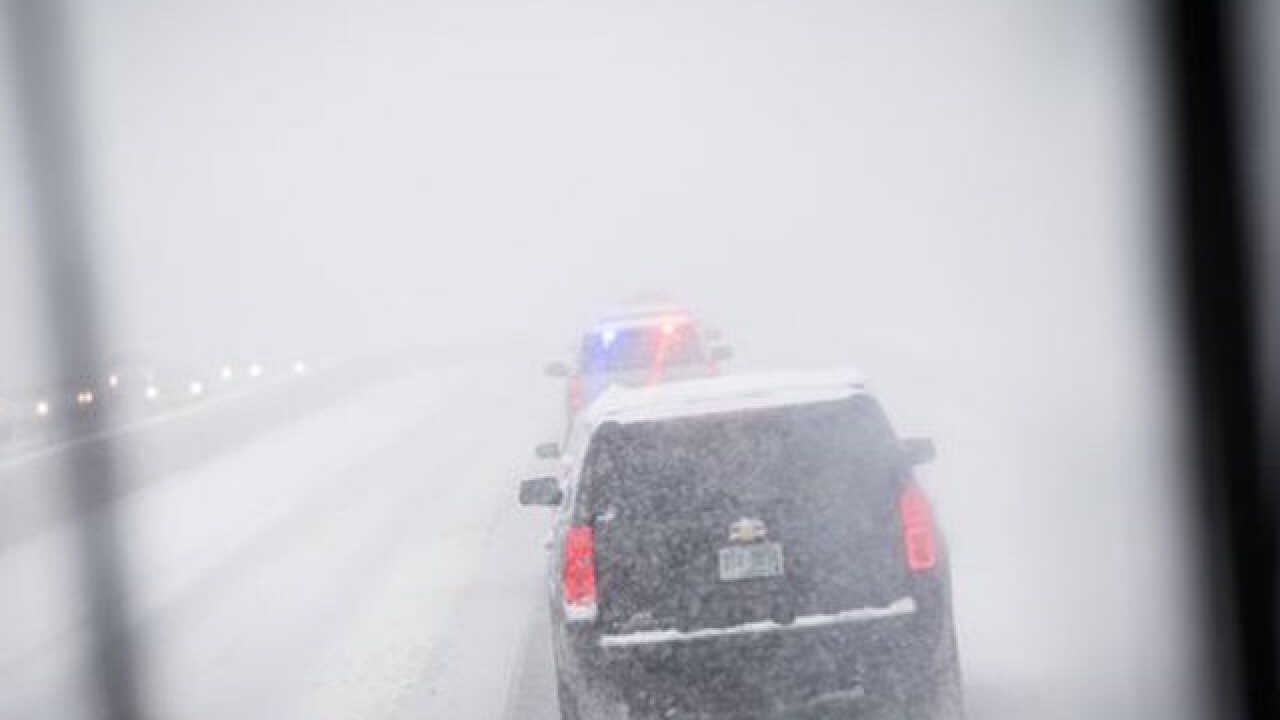 Copyright Associated Press
John Minchillo
<p>The motorcade of Democratic presidential candidate Sen. Bernie Sanders, I-Vt., drives through a snow storm on Interstate 93, Friday, Feb. 5, 2016, in Manchester, N.H. What started off as rain Friday morning quickly turned to sticky, heavy snow. Many school districts in the region closed for the day, including in some in Massachusetts, New Hampshire and Rhode Island. (AP Photo/John Minchillo)</p>

Stoic New Englanders going about their business didn't have to like it, but after some parts of the region got more than nine feet of snow last winter, they could deal with it.

"It's beautiful," said Raul Rodriguez, who works in the Connecticut attorney general's office. "It's been mild this winter. We deserve it. We've had several brutal years of snowstorms."

The storm was New England's biggest snowstorm so far this season, coming two weeks after a massive blizzard engulfed much of the Eastern Seaboard but largely spared Boston and points north.

Not everyone was chipper about winter's belated blast.

"I hate snow," said Bruce Schulman, a Boston University history professor who was waiting at Boston's South Station to take a train to New York.

"Obviously, we've had a pretty mild winter so far, but we needed it after last year," Schulman said. "If I never see snow again, I won't miss it."

The weather didn't stop presidential candidates from campaigning in New Hampshire, just four days away from its first-in-the-nation primary.

Republican candidate John Kasich approached a 6-year-old girl at an event in Atkinson and asked her, "Don't you want to be out in the snow?" and then told her father, "Dad, why don't you take her out in the snow?"

The National Weather Service issued a winter weather advisory from Delaware to New Jersey and a winter storm warning for most of New England.

Police in Canton, Massachusetts, about 15 miles south of Boston, urged residents on Twitter to stay indoors because falling trees and branches were causing a dangerous situation in the town.

The Massachusetts Bay Transportation Authority said it closed a portion of a trolley line between Boston and suburban Newton when a tree fell across the tracks and was busing passengers Friday afternoon. Otherwise, the Boston-area transit system that was crippled by last winter's storms was holding up well, Gov. Charlie Baker said earlier in the day.

Many school districts across the region closed for the day. Every public school in Rhode Island was closed except for the lone school on Block Island, which was expected to get much less snow than the mainland.

Travel was treacherous; police across the region reported dozens of spinouts. In New York City, a crane being taken down because of windy conditions collapsed during a snow squall, killing one person.

The storm was expected to leave 6 to 8 inches of snow in the Boston area, 6 to 10 in the Worcester area and 4 to 8 inches in Providence, Rhode Island, according to the National Weather Service.

Maine could get more. Meteorologist Mal Walker in Caribou said Maine's eastern tip could see up to 11 inches.

Farther south, the National Weather Service said New York's Long Island could see 5 inches or more. Parts of New Jersey got about 4 inches before the snow tapered off, while rain that turned to snow snarled the morning commute in eastern Pennsylvania and caused some schools to delay opening.