Poll: Americans prefer cheap to 'Made in USA' 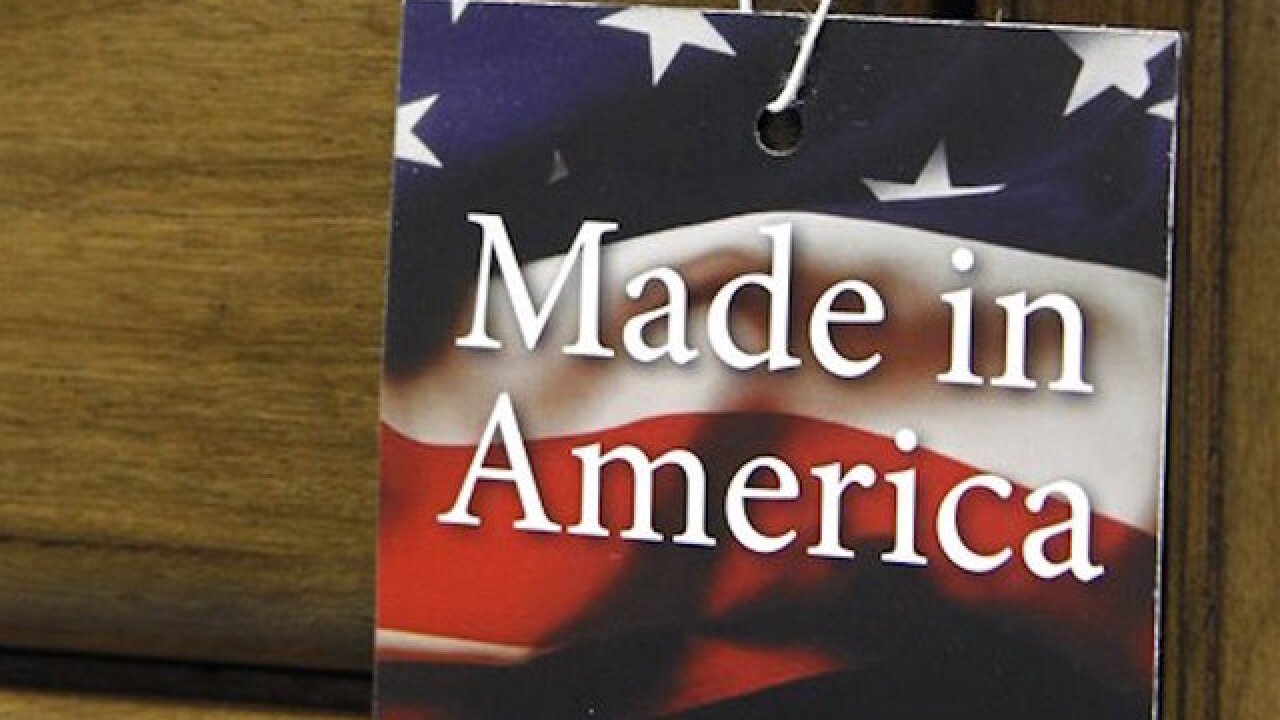 Bob Leverone
<p>In this March 16, 2012 file photo, a "Made in America" tag hangs on a chest of drawers at a furniture factory in Lincolnton, N.C. The vast majority of Americans say they prefer lower prices instead of paying a premium for items labeled ìMade in the U.S.A.,î even if it means those cheaper items are made abroad, according to an Associated Press-GfK poll. (AP Photo/Bob Leverone, File)</p>

WASHINGTON (AP) — The vast majority of Americans say they prefer lower prices instead of paying a premium for items labeled "Made in the U.S.A.," even if it means those cheaper items are made abroad, according to an Associated Press-GfK poll.

While presidential candidates like Donald Trump and Bernie Sanders are vowing to bring back millions of American jobs lost to China and other foreign competitors, public sentiment reflects core challenges confronting the U.S. economy. Incomes have barely improved, forcing many households to look for the most convenient bargains instead of goods made in America. Employers now seek workers with college degrees, leaving those with only a high school degree who once would have held assembly lines jobs in the lurch. And some Americans who work at companies with clients worldwide see themselves as part of a global market.

Nearly three in four say they would like to buy goods manufactured inside the United States, but those items are often too costly or difficult to find, according to the survey released Thursday. A mere 9 percent say they only buy American.

Asked about a real world example of choosing between $50 pants made in another country or an $85 pair made in the United States — one retailer sells two such pairs made with the same fabric and design — 67 percent say they'd buy the cheaper pair. Only 30 percent would pony up for the more expensive American-made one. People in higher earning households earning more than $100,000 a year are no less likely than lower-income Americans to say they'd go for the lower price.

"Low prices are a positive for US consumers — it stretches budgets and allows people to save for their retirements, if they're wise, with dollars that would otherwise be spent on day-to-day living," said Sonya Grob, 57, a middle school secretary from Norman, Oklahoma who described herself as a "liberal Democrat."

But Trump and Sanders have galvanized many voters by attacking recent trade deals.

From their perspective, layoffs and shuttered factories have erased the benefits to the economy from reduced consumer prices.

"We're getting ripped off on trade by everyone," said Trump, the Republican front-runner, at a Monday speech in Albany, New York. "Jobs are going down the drain, folks."

The real estate mogul and reality television star has threatened to shred the 1994 North American Free Trade Agreement with Mexico and Canada. He has also threatened to slap sharp tariffs on China in hopes of erasing the overall $540 billion trade deficit.

U.S. Trade Deficit as a Percentage of GDP | InsideGov

Economists doubt that Trump could deliver on his promises to create the first trade surplus since 1975. Many see the backlash against trade as frustration with a broader economy coping with sluggish income gains.

"The reaction to trade is less about trade and more about the decline in people's ability to achieve the American Dream," said Caroline Freund, a senior fellow at the Peterson Institute for International Economics. "It's a lot easier to blame the foreigner than other forces that are affecting stagnant wage growth like technology."

But Trump's message appeals to Merry Post, 58, of Paris, Texas where the empty factories are daily reminders of what was lost. Sixty-eight percent of people with a favorable opinion of Trump said that free trade agreements decreased the number of jobs available to Americans.

"In our area down here in Texas, there used to be sewing factories and a lot of cotton gins," Post said. "I've watched them all shut down as things went to China, Mexico and the Philippines. All my friends had to take early retirements or walk away."

Sanders, the Vermont senator battling for the Democratic nomination, has pledged to end the exodus of jobs overseas.

"I will stop it by renegotiating all of the trade agreements that we have," Sanders told the New York Daily News editorial board earlier this month, saying that the wages paid to foreigner workers and environmental standards would be part of any deal he would strike.

Still, voters are divided as to whether free trade agreements hurt job creation and incomes.

On jobs, 46 percent say the agreements decrease jobs for American workers, while 11 percent say they improve employment opportunities and 40 percent that they make no difference. Pessimism was especially pronounced among the 18 percent of respondents with a family member or friend whose job was offshored. Sixty-four percent of this group said free trade had decreased the availability of jobs.

The AP-GfK Poll of 1,076 adults was conducted online March 31-April 4, using a sample drawn from GfK's probability-based KnowledgePanel, which is designed to be representative of the U.S. population. The margin of sampling error for all respondents is plus or minus 3.3 percentage points.

Respondents were first selected randomly using telephone or mail survey methods and later interviewed online. People selected for KnowledgePanel who didn't otherwise have access to the Internet were provided access at no cost to them.