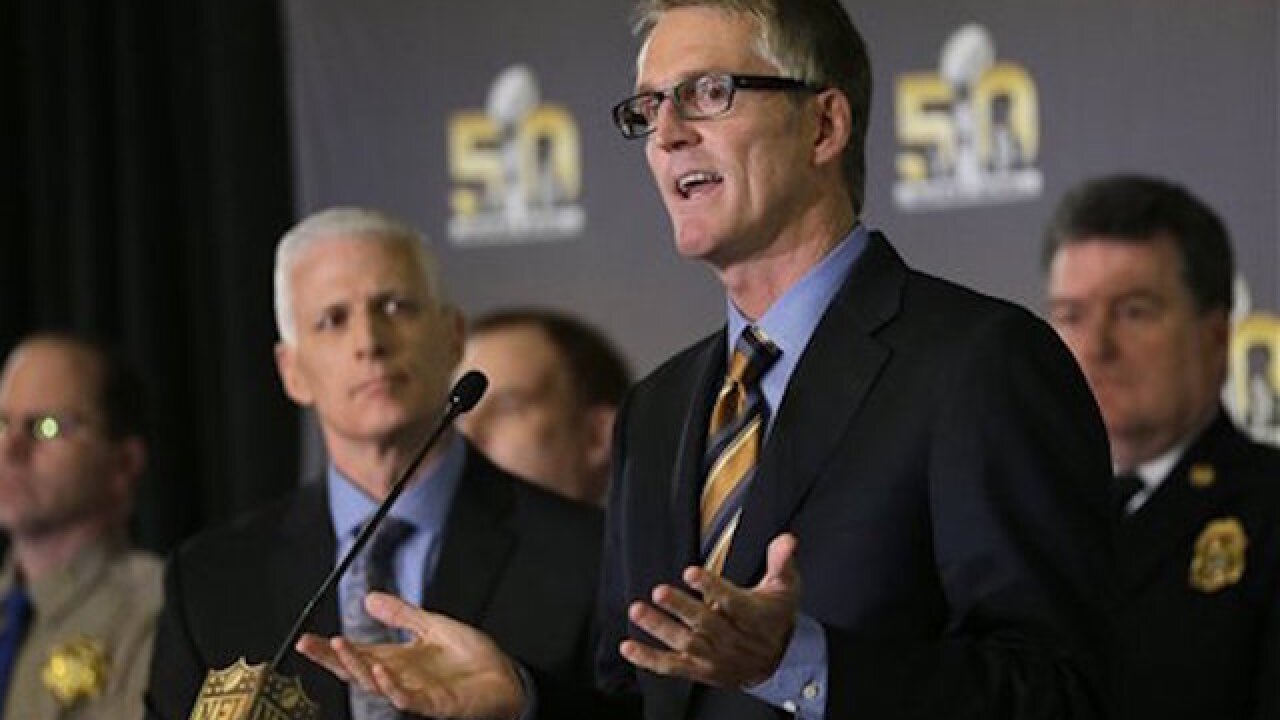 Jeffrey Miller, NFL senior vice president of security, planned to walk the perimeter of Levi's Stadium again Wednesday and he estimates it's approximately three to four miles around the facility in Santa Clara where Sunday's Super Bowl will be played between Carolina and Denver.

Miller said he is satisfied with the collaborative effort between local, state and federal law enforcement agencies to handle any possible issues, including terrorism of any kind.

"It gives the NFL a great deal of confidence in the safety of our premiere event, our teams and our fans," Miller said at a news conference Wednesday. "I can speak for Commissioner (Roger) Goodell in saying that we are deeply appreciative of the leadership, resources and attention to detail put forth by our public safety partners."

Officials have learned from recent attacks in Paris and San Bernardino, California.

"Every year is different. The world situation, the threat picture is different every February," said Homeland Security Secretary Jeh Johnson. "We are, with the NFL, with our federal partners, and state and local law enforcement, focused on layered security, seen and unseen. We learned from events of the past but we have to protect against events of the future. So, we try to anticipate things that can happen from multiple different directions. But we're always informed by recent events and what we see in the world situation."

Johnson said intelligence has picked up no troubling signals so far.

"At this time we know of no credible threat directed at Super Bowl 50," Johnson said.

Miller said drones are banned in the vicinity of the $1.3 billion, 2-year-old Levi's Stadium and there are overall flight restrictions.

"They're prohibited even to possess one in the parking area, for a regular game, then secondly we have a temporary flight restriction in place at all NFL stadiums for all of our games," Miller said. "So, that's an aircraft."

There will be no large-scale public viewing spot in downtown San Francisco, unlike the way the city offered such opportunities for the baseball San Francisco Giants' World Series championship runs in 2010, '12 and '14.

The FBI opened a multi-agency command post last week about six miles from Levi's Stadium that will be continuously staffed through Sunday. Still, authorities are calling on the public to notify officials if they see anything out of the ordinary or suspicious.

"We absolutely need the public's assistance," said David Johnson of the FBI's San Francisco office. "We are confident in the plan and the resources that are in place."