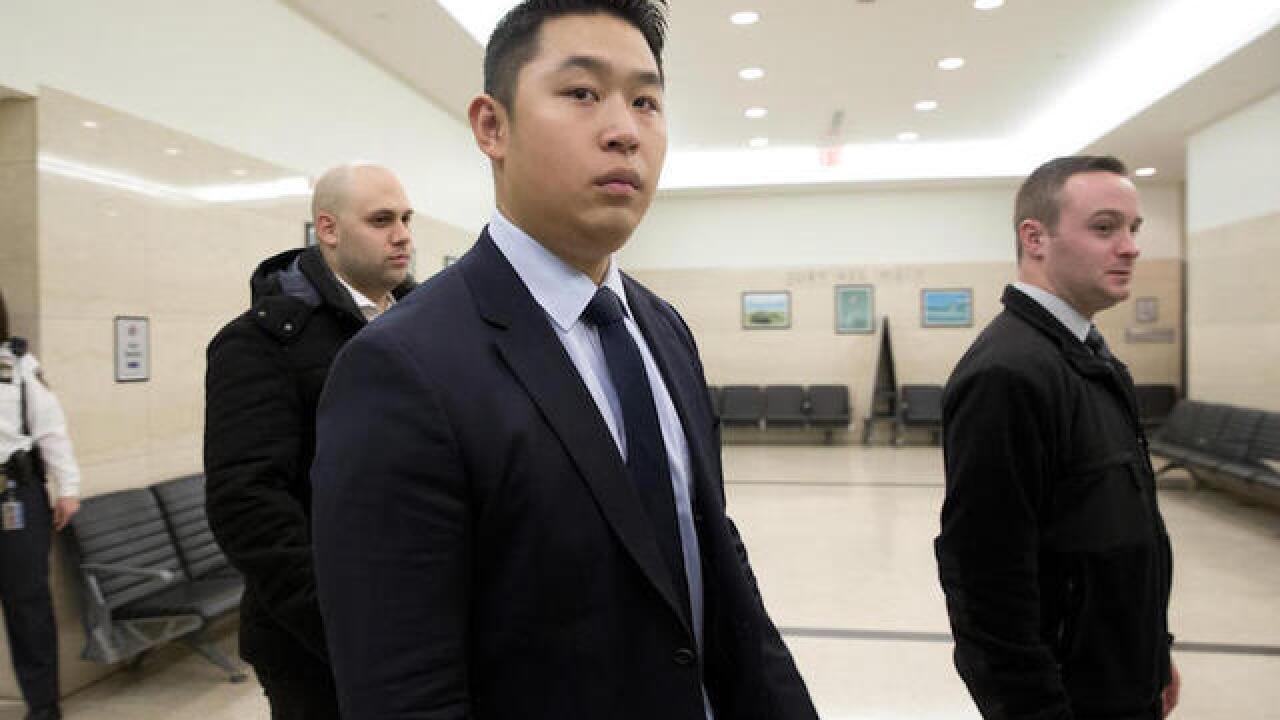 Mary Altaffer
<p>FILE - In this Feb. 9, 2016 file photo, former New York City police officer Peter Liang, center, returns to the courtroom after a break in his trial on charges in the shooting death of Akai Gurley, at Brooklyn Supreme court in New York. Liang was fired from the police force shortly after the February jury verdict in the death of Gurley. Liang will find out if he's going to prison during sentencing on Tuesday, April 19, following his manslaughter conviction in the accidental shooting death of the unarmed man in a darkened stairwell. (AP Photo/Mary Altaffer, File)</p>

NEW YORK (AP) — A former police officer convicted in the accidental shooting death of an unarmed man in a darkened stairwell was spared prison time Tuesday, and a judge reduced his manslaughter conviction to a lesser charge.

Peter Liang was sentenced to five years' probation and 800 hours of community service in the 2014 shooting of Akai Gurley, who was walking down a stairway in a public housing complex when the rookie officer fired a bullet into the dark — by accident after being startled, he said. The bullet ricocheted and killed Gurley, 28.

"Given the defendant's background and how remorseful he is, it would not be necessary to incarcerate the defendant to have a just sentence in this case," Brooklyn state Supreme Court Justice Danny Chun said in sentencing Liang, also 28.

A jury had convicted him in February of a manslaughter charge carrying up to 15 years in prison. But Chun on Tuesday reduced the offense to criminally negligent homicide, which carries up to four years in prison.

Liang, speaking softly, said he never meant to fire the gun and apologized to Gurley's family.

"My life is forever changed," he added. "I hope you give me a chance to rebuild it."

Liang was the first New York City police officer convicted in an on-duty shooting since 2005, and the verdict prompted an outpouring of demonstrations on both sides of a closely watched case. The shooting happened in a year of debate nationwide about police killings of black men. Gurley was black; Liang is Chinese-American.

As the sentencing approached, dozens of demonstrators gathered outside the courthouse — some supporting Liang, others the Gurley family.

Brooklyn prosecutors had recommended Liang serve no time, based on his record and the circumstances of the trial.

"As a result of this conviction, Peter Liang will never be a police officer again," Brooklyn Assistant District Attorney Joe Alexis told the judge. "He's not someone who needs to be locked up to protect society."

Some members of Gurley's family had said they felt betrayed by prosecutors' recommendation and had hoped Chun would sentence Liang to prison anyway.

Gurley's girlfriend, Melissa Butler, who was with him when he died, told Liang: "When you stole Akai's life, you stole mine as well."

After hearing the sentence, Gurley's relatives wept and hugged outside the courthouse.

"There's no justice. Akai Gurley's life does not matter. Black lives do not matter," said his aunt, Hertensia Petersen. But, she vowed, "justice will be served, one way or the other."

Activists have looked to Liang's trial as a counterweight to cases in which grand juries have declined to indict officers, including the cases of Michael Brown in Missouri and Eric Garner in New York.

Brooklyn District Attorney Kenneth Thompson cautioned that Liang's case shouldn't be commingled with others. But relatives of other New Yorkers killed in police encounters had joined Gurley's family outside court during the trial to call for police accountability.

Meanwhile, Liang's supporters have said he has been made a scapegoat for past injustices. More than 10,000 of his backers rallied in New York and across the U.S. after the verdict, protesting his conviction.

The missteps made by Liang after the shooting were on display during the trial, including that he failed to aid the bleeding Gurley as the dying man's girlfriend frantically performed CPR. A neighbor called out instructions delivered from a 911 operator on the phone. Liang and his partner, who wasn't charged and testified during the trial, said they didn't help because they weren't well-trained. The admissions prompted an internal investigation into training by Commissioner William Bratton.

Liang's attorneys had sought to get the verdict tossed out based on juror misconduct, but the judge refused. Liang was fired after the verdict. So was his partner.