No motive in machete attack at Ohio restaurant 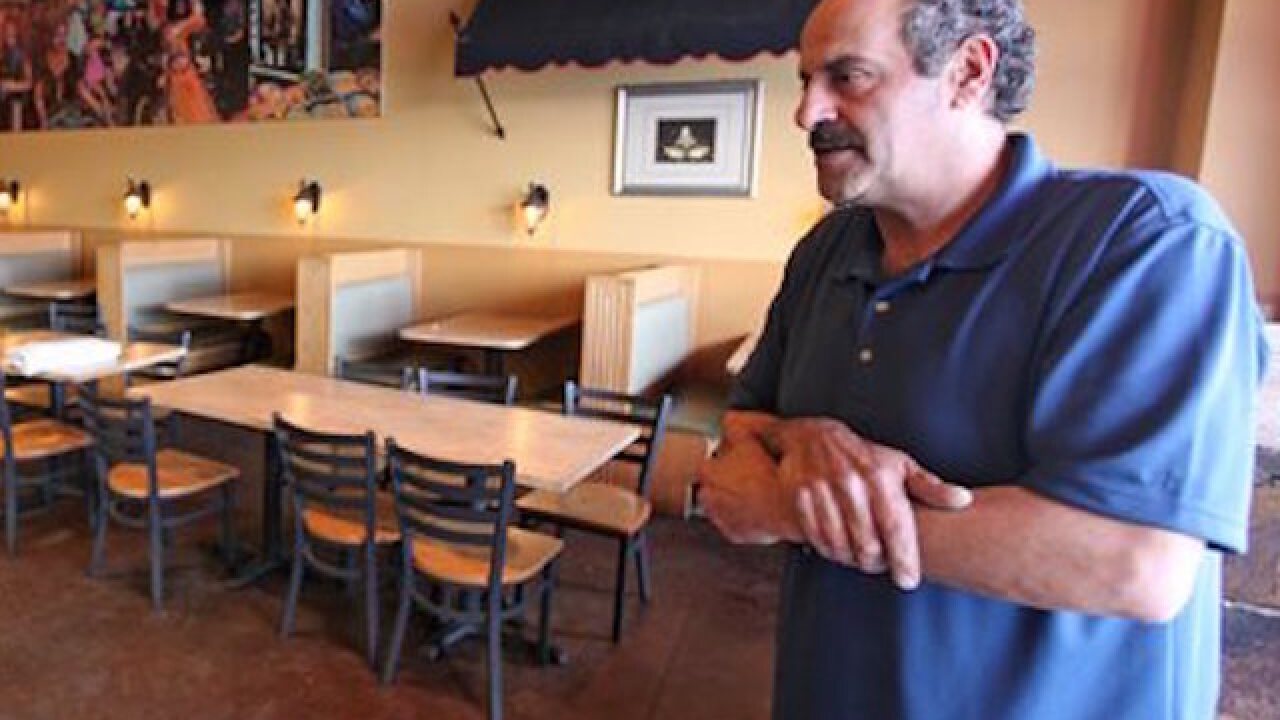 Copyright Associated Press
Doral Chenoweth
<p>Nazareth restaurant owner Hany Baransi describes the machete attack last night in his restaurant on Friday, Feb. 11, 2016 in Columbus, Ohio. Quick observations by employees and patrons witnessing a machete attack on diners at a restaurant helped authorities track down the fleeing suspect, who was fatally shot in a confrontation with officers a few miles away, police said. (Doral Chenoweth/The Columbus Dispatch via AP) MANDATORY CREDIT</p>

COLUMBUS, Ohio (AP) — From the front door, the man with the machete didn't have a straight path to people in the booths at the small suburban restaurant. He stepped by the welcoming greeting on the front glass, past the half-wall entryway divider and the display case of kataifi and other Mediterranean pastries.

"There was no rhyme or reason as to who he was going after," said Sgt. Rich Weiner, a Columbus police spokesman.

By the time it was over, four adults were wounded and the attacker was dead, shot by police in a confrontation a few miles away.

Columbus police identified the attacker as 30-year-old Mohamed Barry. They didn't give a hometown for him, and his background isn't immediately clear.

It's unclear what motivated the Thursday evening attack at Nazareth Restaurant and Deli. Columbus police confirmed they're working with federal authorities on the investigation.

"Lone individual, machete, going into a public place, committing an assault on people that he apparently does not know," Columbus Deputy Chief Michael Woods said. "Those are the things that give us concern and those are things we wanted to answer right away."

Information connected to the registration of the suspect's car triggered an alert that required contacting the local terrorism task force, including the FBI, Weiner said.

Owner Hany Baransi told The Columbus Dispatch he believes his restaurant was targeted because he is Israeli. But FBI Special Agent Rick Smith told the newspaper it's too early in the investigation to jump to any conclusions.

Police credited the employees and patrons with acting quickly and observantly to fend off the man and help authorities catch him. Some threw chairs at the attacker, who'd been there about a half hour earlier but left after a conversation with an employee, and someone scuffled with the man before he fled in a car, Weiner said.

Minutes later, a 911 caller reported that he'd been hit by a car in the area and that "a long weapon flew up in the air after he hit us."

Police said witnesses at the restaurant had great descriptions of the suspect's vehicle and a bit of video that provided partial license plate information. That helped authorities track down and confront the man near the large Easton Town Center shopping complex. The suspect, who had the machete in one hand and a knife in the other, was fatally shot by police after officers unsuccessfully tried to use a stun gun to stop him and he lunged, Weiner said.

Twelve hours after the attack, the police tape and cruisers were gone outside the closed restaurant in a small strip mall. Overturned dining chairs and dark-stained pieces of paper towels and cloth littered the floor.

Next to the door, under the glow of a neon sign advertising gyros, remained the printed sign with the Arabic greeting: "Ahlan Wa Sahlan." Or, roughly, "You are welcome to our place."