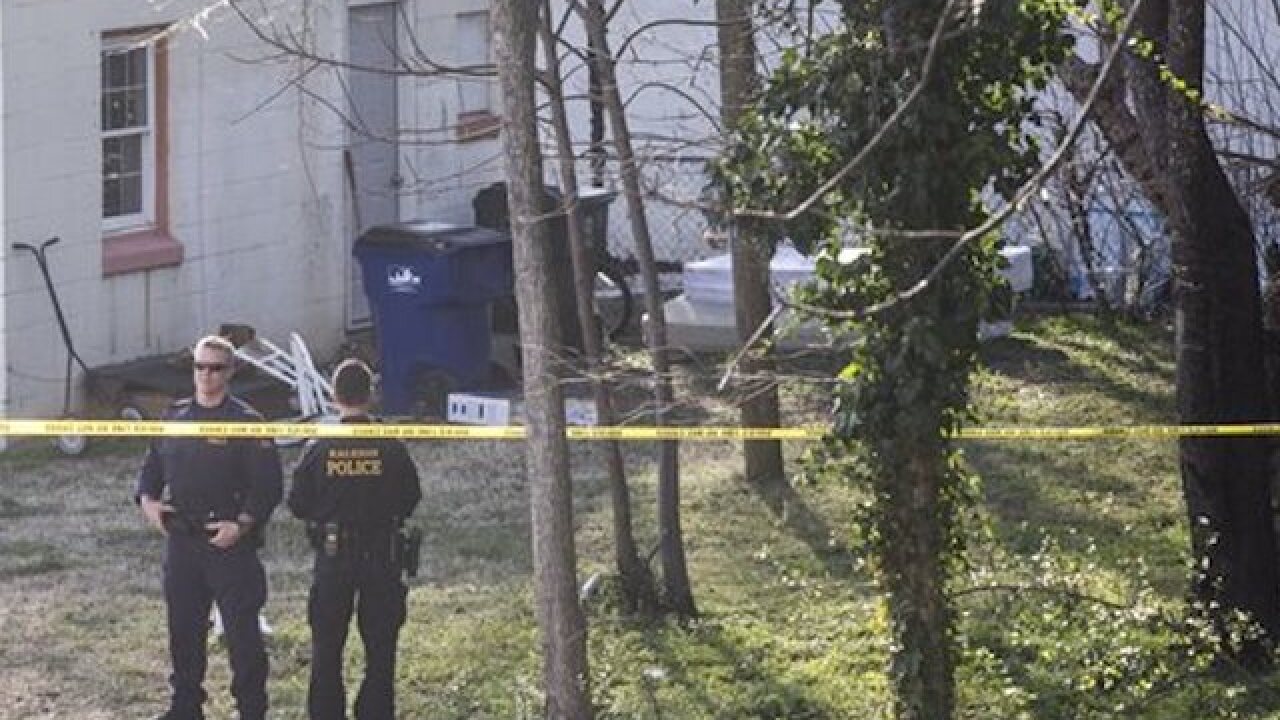 RALEIGH, N.C. (AP) — The neighborhood where an officer fatally shot a black man during a foot chase is on edge Tuesday, awaiting answers in one of the latest police shootings in a predominantly African-American community.

Eyewitnesses have offered descriptions of what happened Monday, including a woman who said a black man was shot in the back by a white police officer, but authorities have so far been tightlipped. Raleigh police Chief Cassandra Deck-Brown said an officer was pursuing a man who was wanted on a felony drug charge when the officer opened fire. The chief said a gun was found near the suspect's body, but she did not say whether it was his.

After the shooting, neighborhood residents began chanting "no justice, no peace" — a slogan used by the Black Lives Matter movement. Later in the evening, about a dozen people gathered around an anti-police sign with an expletive that was hoisted on a utility pole.

The head of the North Carolina National Association for the Advancement of Colored People called for a fair and transparent investigation.

"If one is running away, that is not a license to kill," the Rev. William Barber II said.

"They stopped me at the door. Somehow they knew I was on my way," Byrd said.

A day earlier, she questioned the police officer's use of force.

"Why should we show our calm when they're not showing theirs? Why wasn't there a Taser pulled out to Taser him while he was jumping over that fence? What happened to beanbags guns? They used to use those to stop a criminal. They don't do that anymore. Now it's just bullets — all bullets. Why?" she said.

Denkins had previous drug convictions and was released on $10,000 secured bond in October after being charged with two counts of selling or delivering cocaine and one count of felony possession of cocaine with intent to sell or deliver, according to court documents. He failed to show up for a court date and an order for his arrest was filed Friday.

The officer involved in the shooting was identified as senior officer D.C. Twiddy, 29, according to police spokesman Jim Sughrue. He said Twiddy has been placed on administrative leave, in accordance with department policy, while the State Bureau of Investigation looks into the matter. Twiddy's race was not released.

Witness Claresa Williams said she was standing on the curb in front of her apartment when she saw an officer drive up. A man she knows as "Lock Man" in the neighborhood was standing in front of a convenience store and began to run, she said.

"When the police came, he jumped the fence" into the backyard of a house next door, Williams told The Associated Press. "The officer jumped the fence, pulled his gun out and shot him down six times."

Williams said her view was blocked so she didn't see the man fall from the bullets.

"To me, you pulled your gun out and you fired at that man six times in his back because he was running," Williams said.

Judith Lewis, a woman who described herself as a community activist who has lived in the area for years, said a lot of drug activity takes place in the neighborhood at night. She blamed it on buyers coming in from elsewhere.

Deck-Brown said the Raleigh Police Department's Internal Affairs unit will investigate whether any departmental policies were violated. She said she will send a report to the city manager within five working days.