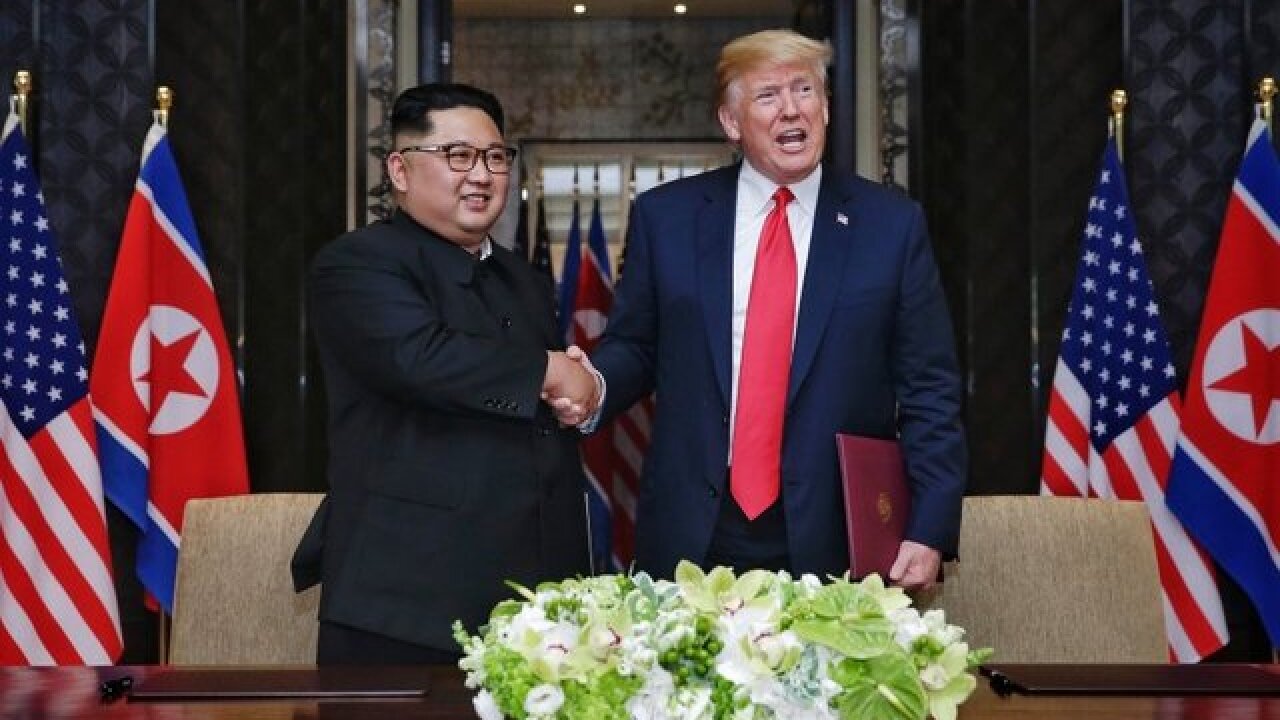 Images of hundreds of North Koreans jubilantly clapping and waving flags as Kim Jong Un landed in Pyongyang Wednesday have been broadcast across the reclusive country as part of a lengthy state media documentary about his historic summit with US President Donald Trump.

The 42-minute long video aired Thursday revealed behind-the-scenes footage of Kim's unprecedented trip, including of him arriving in Singapore on a Chinese plane and lounging in his luxury hotel.

It was likely some North Koreans' first glimpse of the world outside their tightly restricted borders, including possibly jaw-dropping images of the glittering Singapore skyline.

In contrast to the usually dour programming on the official KCTV news channel, the footage of Kim strolling by swimmers on the Marina Bay Sands rooftop pool or the lush indoor gardens of Sentosa Island would likely be an unusual sight for North Korean viewers.

The country's state media had already highlighted Kim's approval of his host country -- KCNA said on Wednesday Kim was impressed with the "clean and beautiful" city.

"He is going to learn a lot from the good knowledge and experience of Singapore in various fields in the future," state media said.

One of the most widely watched international summits in recent years, the meeting between US President Donald Trump and Kim has been hailed as "historic" by multiple countries in the region including China and South Korea.

From touchdown to departure

Over a soaring soundtrack, the documentary ran edited footage of Kim's trip to Singapore, following his movements throughout the city-state, from his arrival on Sunday to his departure on Tuesday night.

It opened with shots of the young North Korean leader preparing for his meeting with Trump en route to the summit aboard the Air China jet loaned to him by the Chinese government.

Narrated in the rousing tones of famous North Korean newsreader Ri Chun-hee, the documentary stressed that although Kim had already had "countless" meetings with world leaders, this one had drawn attention from across the world.

Shots of Singaporeans cramming the streets to welcome the North Korean leader were imposed over Ri's narration, saying Kim was warmly welcomed.

"A lot of leaders of different countries have visited Singapore but it is unprecedented in the history of Singapore to have streets filled with the welcoming crowd like this," Ri said.

As he prepared for his Trump summit, Kim was shown lounging in his luxurious St Regis hotel suite before heading out for his tour of Singapore, which including strolling around the iconic Marina Bay Sands tower.

The camera lingered on smiling Singaporeans straining to take photos of the North Korean leader as he passed them.

"Streets were full of people admiring the Supreme leader for his brilliant political skills to lead complex and eventful international politics," Ri said.

The broadcast of the documentary was followed immediately afterward by a video montage of North Korea's own skyline, replete with newly-built glistening towers.

Trump: 'No longer a nuclear threat'

North Korea is not the only one advertising the broad success of the Singapore summit -- in a series of tweets on Wednesday, US President Donald Trump said the trip had been a "very positive experience."

"Just landed - a long trip, but everybody can now feel much safer than the day I took office. There is no longer a Nuclear Threat from North Korea," the US leader said on his official Twitter account. "North Korea has great potential for the future!"

But there has been some confusion as to what was actually agreed to during the visit, with North Korean state media saying there was discussion about removing sanctions "as progress is made."

However US Secretary of State Mike Pompeo strongly denied there would be any easing of sanctions on Pyongyang until denuclearization was complete.

Additionally, a surprise announcement by President Trump that military exercises with South Korea would be suspended has been met with confusion in Seoul.

Although the Moon Jae-in administration widely welcomed the news from the summit, South Korea's Foreign Minister Kang Kyung-wha said on Thursday any calling off of the drills would require "consultations."