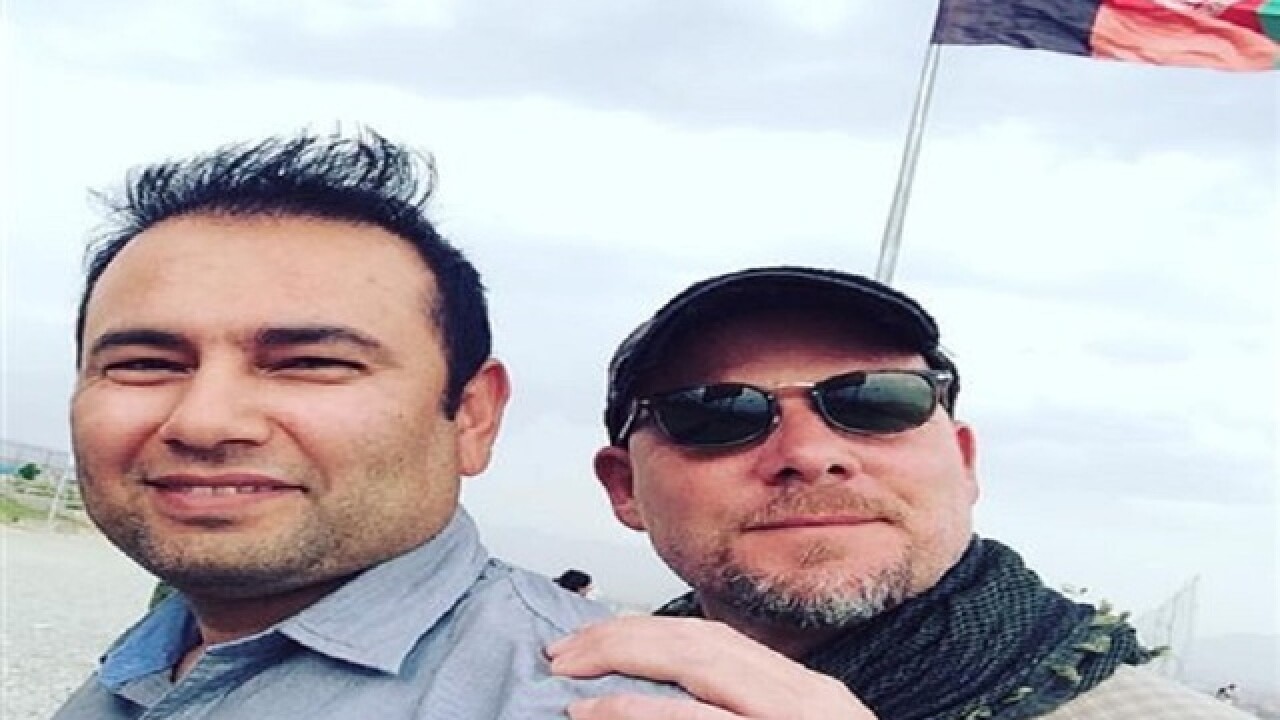 WASHINGTON (AP) — David Gilkey, a veteran news photographer and video editor for National Public Radio, and an Afghan translator, Zabihullah Tamanna, were killed while on assignment in southern Afghanistan on Sunday, the network says.

Gilkey and Tamanna were traveling with an Afghan army unit near Marjah in Helmand province when the convoy came under fire and their vehicle was struck, the network's spokeswoman, Isabel Lara, said in a statement. Two other NPR journalists, Tom Bowman and producer Monika Evstatieva, were traveling with them and were not hurt.

Secretary of State John Kerry called the attack that killed Gilkey and Tamanna "a grim reminder of the danger that continues to face the Afghan people, the dedication of Afghan national defense and security forces to securing their country, and of the courage of intrepid journalists — and their interpreters — who are trying to convey that important story to the rest of the world."

Afghan President Ashraf Ghani condemned the attack, calling it cowardly and "completely against all the principles and values of Islam and humanity, and against all international laws."

In a statement issued by the presidential palace Monday, Ghani was quoted as saying the Taliban ignored the differences between military, civilians and journalists, killing Gilkey and Tamanna as they prepared their reports on the war.

Ghani on Monday visited Helmand province, where the fatal attack on Gilkey and Tamanna's their vehicle took place, offering his condolences to their families.

The deputy spokesman for the 215 Army Corp in Afghanistan's southern Helmand province, Maj. Abdul Qader, told The Associated Press that the vehicle Gilkey and Tamanna were traveling in came under sustained Taliban attack not far from the main army base in Marjah. He said their Humvee was "only 300 to 400 meters from the army base when suddenly they came under attack."

The Humvee was hit by a rocket-propelled grenade, he said. A total of five people were in the Humvee at the time - Gilkey, Tamanna, a heavy machine gun operator who was on the roof of the vehicle, as well as an Afghan army soldier and driver.

Along with Gilkey and Tamanna, the driver and the machine gunner were also killed, Qader said.

The attack lasted 30 to 40 minutes, he said, during which time army helicopters were called in to provide air support.

The U.S.-NATO Resolute Support mission in Afghanistan said the bodies had been flown to Kabul, and were awaiting repatriation being organized by the embassy.A

Gilkey had covered conflict and war in Iraq and Afghanistan since the Sept. 11, 2001, attacks on Washington and New York and was committed to helping the public see the wars and the people caught up in them, NPR's senior vice president of news and editorial director, Michael Oreskes, said in a statement.

"As a man and as a photojournalist, David brought out the humanity of all those around him. He let us see the world and each other through his eyes," Oreskes said.

Tamanna was a freelancer who often worked for NPR, Lara, the spokeswoman, said in an email. Known as Zabi, he also worked as a photographer and reporter, taking pictures for China's Xinhua news agency and writing for Turkey's Anadolu News Agency. The stories he covered ranged from the inauguration of the new president, to the daily attacks and drone strikes in the war-ravaged country.

Veteran correspondent Phillip Reeves, who recruited Tamanna to the network, called him "a great colleague."

"He was a lovely man, with a great eye for a story and deep wisdom about his country," Reeves said in a statement. "He clearly loved his family."

Gilkey covered both national and international news for the radio network and its website and had made numerous trips to Afghanistan and Iraq, according to NPR's website.

His work has been recognized with numerous awards, including the prestigious George Polk Award and a national Emmy. The White House News Photographers Association named Gilkey their Still Photographer of the Year in 2011. In 2015, he became the first multimedia journalist to receive the Edward R. Murrow Award for his coverage of international breaking news, military conflicts and natural disasters.

Twenty-seven journalists have been killed in Afghanistan since 1992, according to the Committee to Protect Journalists, not counting Gilkey and Tamanna. They include Anja Niedringhaus, a photographer for The Associated Press who was shot dead in 2014 while covering the national elections for president and provincial councils. AP special correspondent for the region, Kathy Gannon, was also in the car and wounded in the attack.

Worldwide, nearly 1,200 journalists have died since 1992, according to CPJ's website.

In addition to Iraq and Afghanistan, Gilkey covered the conflict between Israel and Hamas in Gaza, the devastating earthquake that shook Haiti in 2010, the fall of apartheid in South Africa, famine in Somalia, and war in Rwanda and the Balkans.

"The things to do were amazing and the places to see were epic," Gilkey once said of his work. "But the people, the people are what made it all worth the effort."

Gilkey's first journalism job was with the Boulder Daily Camera in Colorado, where he covered local assignments for the paper and overseas assignments for Knight Ridder, according to NPR. He later joined the Detroit Free Press until he began working for NPR in 2007.