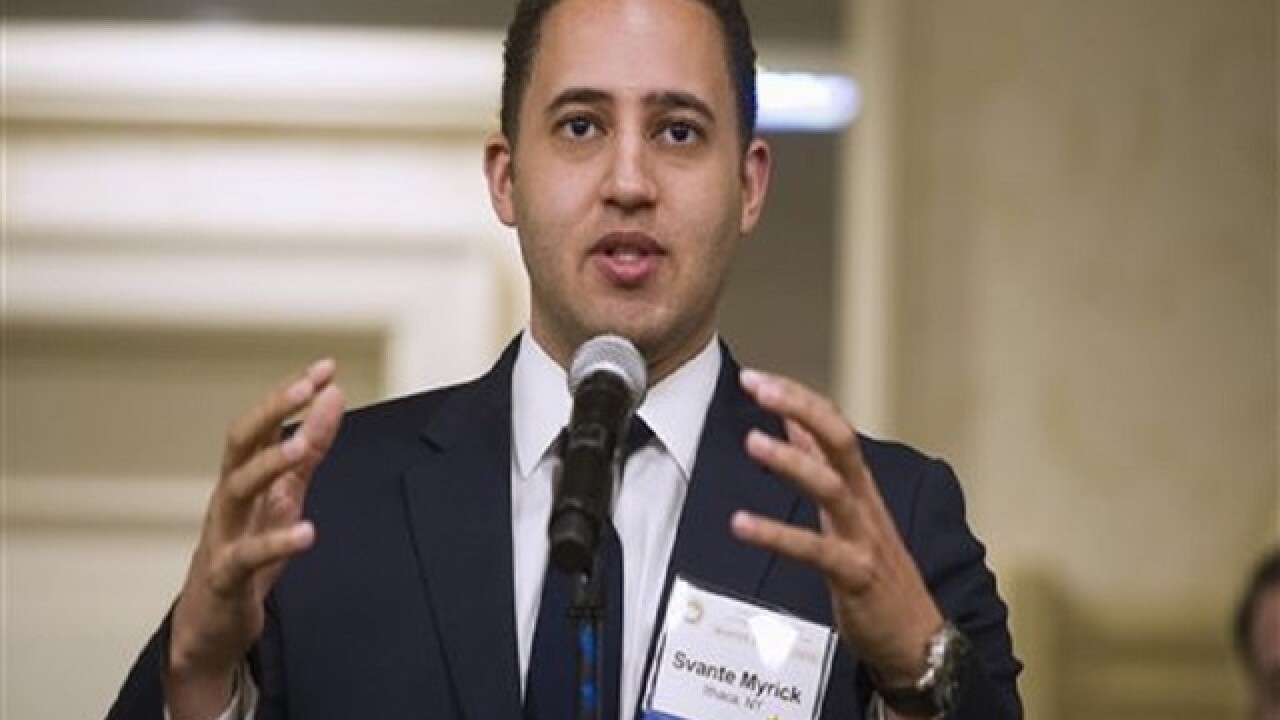 Cliff Owen
<p>FILE - In this Jan. 21, 2016 file photo, Ithaca, N.Y. Mayor Svante Myrick speaks during at the U.S. Conference of Mayors Winter Meeting in Washington. Myrick wants his city to become the first in the U.S. to offer heroin users a safe, controlled place to shoot up. Supervised injection sites, in which a trained medical professional is on hand to deal with overdoses, are already in operation in Europe and Canada, but the idea never gained acceptance in America's law-and-order approach to the war on drugs.(AP Photo/Cliff Owen, File)</p>

ALBANY, N.Y. (AP) — An upstate New York mayor's proposal to consider allowing heroin users to shoot up under medical supervision has divided drug policy experts, with some hailing it as an innovative, science-based approach and others rejecting it as radical and a slippery slope to legalization.
Ithaca Mayor Svante Myrick formally announced the idea Wednesday as one of several proposals to address a wave of opioid addiction. The Democratic mayor also wants to create a new office of drug policy, help at-risk teens learn work skills and adopt a strategy implemented in Seattle that has police sending low-level drug offenders to treatment instead of jail.
"We had to try something else," he said of his plan. "I believe this will be a model for cities around the country."
It is Myrick's interest in opening the nation's first supervised injection site that has attracted the most praise — and criticism.
The facilities, which already operate in Canada, Australia and Europe, would allow users to shoot up under the supervision of a nurse, who would deliver an antidote in the case of an overdose. Myrick envisions a facility that also offers clean syringes and access to treatment and recovery programs.
The proposal faces significant legal and political hurdles. Myrick said the city could petition the state's Department of Health to declare heroin addiction a health epidemic, a move that would allow the injection site to open.
Gov. Andrew Cuomo's administration has yet to weigh in on Myrick's idea. The governor said to reporters Wednesday, "I'm not familiar with Ithaca's proposal. I can tell you this: Heroin is a statewide crisis."
Kevin Sabet, a former drug policy adviser to three presidents, said he believes injection sites could be a precursor to efforts to fully legalize drugs like heroin.
Other critics said the priority should be more treatment programs.
"The goal here should be getting people off drugs, not doing what we can to make it easy for people to continue to do them," said David Evans, an attorney and adviser to the group Drug Free America.
The New York City-based Drug Policy Alliance, which opposes the nation's current law-enforcement approach to drug use, said Myrick's plan should be a blue print for other cities.
"We are in the middle of a very publicized heroin and opioid epidemic," said Kassandra Frederique, the Alliance's New York state director.
She said it is time for the nation to consider "policies that promote saving people's lives over stigma and shame."
In Ithaca, Myrick's plan has the support of the local prosecutor, District Attorney Gwen Wilkinson. But Ithaca Police Chief John Barber said he is "wary" of the idea.
Associated Press 2016