NYC set to ramp up outreach to homeless 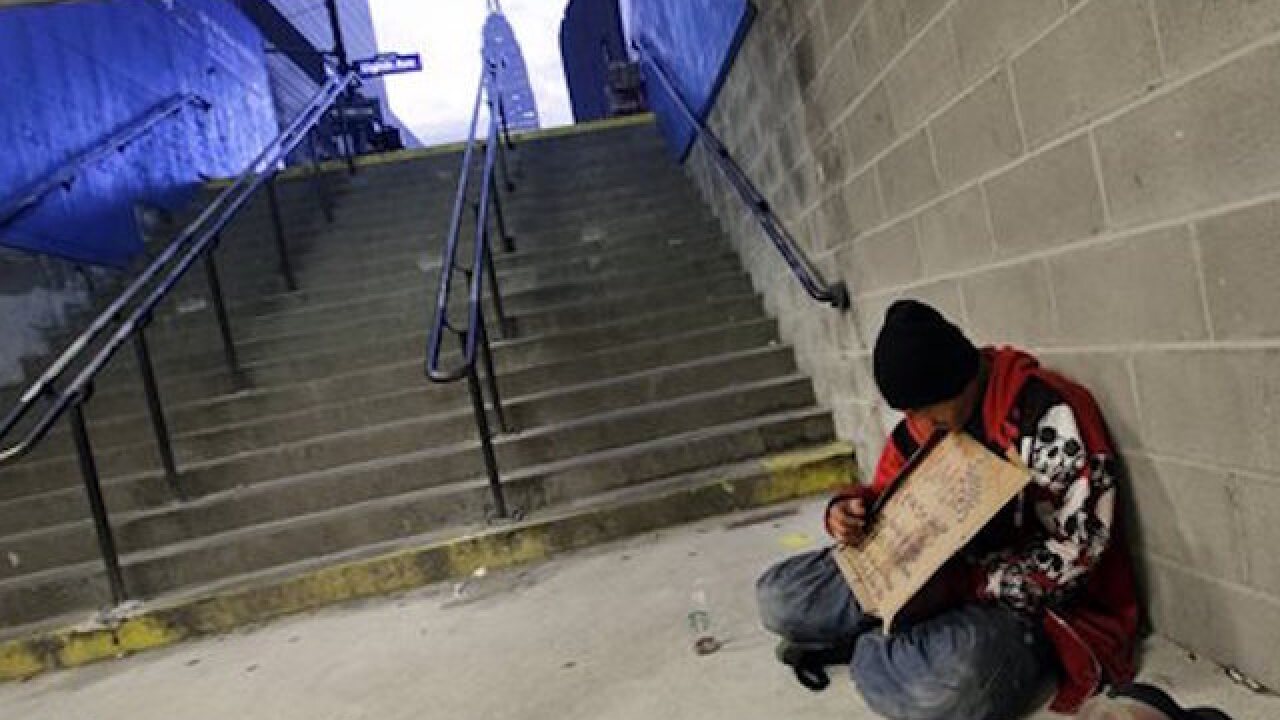 Copyright Associated Press
Mark Lennihan
<p>FILE - In this Oct. 9, 2015 file photo, a homeless man holds a sign asking for money while sitting at the entrance to a subway station in New York. New York City plans to deploy hundreds of outreach workers who will canvass much of Manhattan every day with a deceptively simple goal: talk to as many homeless people as possible, as often as possible. Through frequent contact, the city hopes to persuade the chronic homeless, even those living on the street for years, to go to shelters. (AP Photo/Mark Lennihan, File)</p>

NEW YORK (AP) — A surge of outreach teams set to be deployed by New York City to deal with its persistent street homelessness problem has a deceptively simple goal: talk to as many homeless people as possible, as often as possible.

That increased frequency of contact, many experts believe, could help persuade the homeless, even those who have lived on the street for years, to finally go to a shelter. The number of staffers doing the outreach — which started this past week with plans to double to more than 300 by March — will flood an 8-mile stretch of Manhattan, checking each block daily to try to make contact with the estimated 3,000 to 4,000 people living on the streets of the nation's largest city.

Mayor Bill de Blasio hopes the tactic, which has had mixed results in other U.S. cities, could help the city "crack the code" of what has been a chronic problem. He stressed that, while the city looks to create permanent affordable housing, it still can offer a bed in a shelter, hotel or room donated by religious organizations.

"Now, more than ever, we're going to provide the housing they need," the mayor said during a radio interview Friday. "So if we can get them in the right direction, we actually have a place for them to go."

The teams will engage each homeless person and offer services, such as shelter, medical care or a hot shower, officials said. The hope is that the homeless people, many of whom are mentally ill, will begin to trust the familiar faces and eventually accept help. But they can't be forced to leave.

The de Blasio administration has shifted into high gear in recent weeks to combat the homelessness problem after taking months of criticism for not acting quickly.

There are about 58,000 people living in the city's shelters, a near-record high. Part of the delay, de Blasio acknowledged Friday, was not having an accurate count of the number of street homeless, something the new program, dubbed Home-Stat, aims to fix.

"It will be the most comprehensive street outreach effort directed at the homeless ever deployed in a major American city," the mayor said.

Other cities have tried this approach, including San Francisco, which formed an outreach team a decade ago and until last year focused on canvassing to find and convince homeless people to move to shelters. But it had to change the model to focus on on-site medical care because there wasn't enough shelter for the more than 6,500 homeless people.

In New York, there will also be a newly trained team of about 100 police officers who primary duty will be to deal with the city's homeless. Over the years, police have increasingly relied less on arrests in favor of trying to move people into hospitals.

But Police Commissioner William Bratton suggested this week that he would look into some legislative modifications to expand police officers' authority when dealing with the homeless. For instance, the law currently prohibits begging within 10 feet of a bank ATM; Bratton wants that expanded to ATMs found in stores.

That suggestion and the new outreach teams concerned some homeless advocates, who fear unwarranted arrests or confiscation of property.

"This new program is just more of the same," said Jesus Morales, a member of Picture the Homeless, who has lived on the street for over 15 years. "More case workers, more cops; that does nothing for me. Find us housing."

Giselle Routhier, policy director of Coalition for the Homeless, called the outreach program "a step in the right direction" but cautioned that the city needs to implement it carefully.

"To do this right, there should be trained social services providers going out there who can listen carefully on what the needs of the homeless are and offer real solutions," she said.