Obama, family back in Hawaii 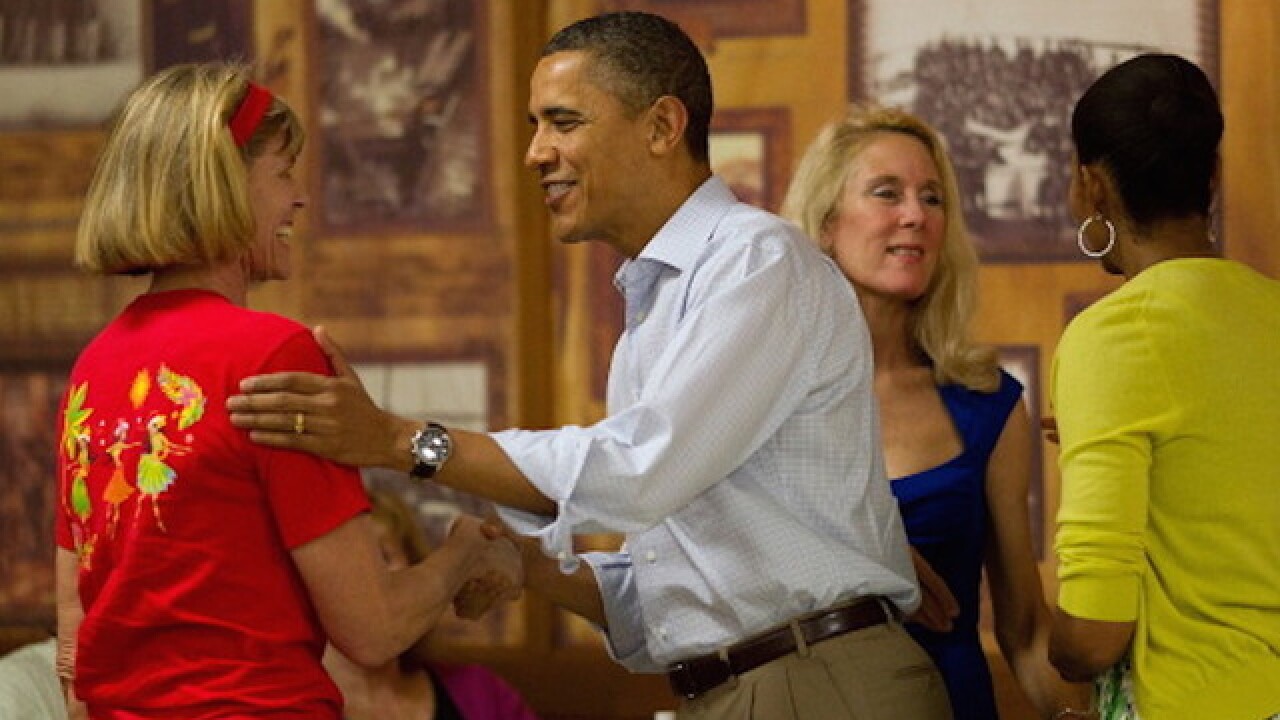 PEARL HARBOR, Hawaii (AP) — After a somber start to his vacation, President Barack Obama arrived in Hawaii on Saturday to celebrate Christmas and ring in his final year as president.

Air Force One carrying Obama, first lady Michelle Obama, and daughters Malia and Sasha landed at Joint Base Pearl Harbor-Hickam in the wee hours of the first day of his annual two-week holiday getaway from Washington.

On the way to Hawaii, Obama stopped in Southern California to carry out what has become one of the grimmest rituals of his presidency: consoling the grieving relatives of victims of gun violence.

Obama and his wife spent nearly three hours late Friday hearing from the loved ones of the nine men and five women killed Dec. 2 when a married couple opened fire on the husband's co-workers at a workplace holiday party in San Bernardino, east of Los Angeles. The FBI is investigating the shooting as an act of terrorism.

Obama said the meetings in a high school library were "so moving" because the families were so representative of the country.

"You had people from every background, every faith. Some described loved ones who had come to this country as immigrants, others who had lived in the area all their lives, all of them extraordinarily proud of the work they were doing to keep people healthy and safe" as employees of the San Bernardino County health department, he said. "As difficult as this time is for them and for the entire community, they're also representative of the strength and the unity and the love that exists in this community and in this country."

Authorities say the attack was planned and carried out by Syed Rizwan Farook, 28, and his wife, Tashfeen Malik, 29. About 15 minutes after the attack began a post on a Facebook page associated with Malik appeared and said "we pledge allegiance" to the leader of the Islamic State group.

So far, authorities have said they have no evidence that the American-born Farook and his Pakistani wife were carrying out orders from an overseas terrorist group or that they were part of a domestic terrorist network.

IS has claimed responsibility for a series of coordinated assaults in Paris on Nov. 13 that left 130 people dead.

Obama flew to San Bernardino after taking questions from reporters at his annual year-end news conference at the White House.

The president usually spends his vacation time in Hawaii, the island state where he was born, frequenting the island's golf courses, dining out, hiking, going to the beach and treating himself and his kids to shave ice, a frozen dessert that looks like a snow cone.

He planned to return to the White House just after the new year to begin focusing on what he can get done with the Republican-controlled Congress in his final year in office.

At the news conference, Obama cited an Asia-Pacific trade deal and overhauling the criminal justice system as areas where progress is possible. But Obama is also likely to spend much of his final year in office focused on the U.S.-led campaign to defeat IS.

"Since taking this office, I've never been more optimistic about a year ahead than I am right now," he said before leaving Washington. "And in 2016, I'm going to leave it out all on the field."