Obama: No excuse for GOP not to vote on nominee 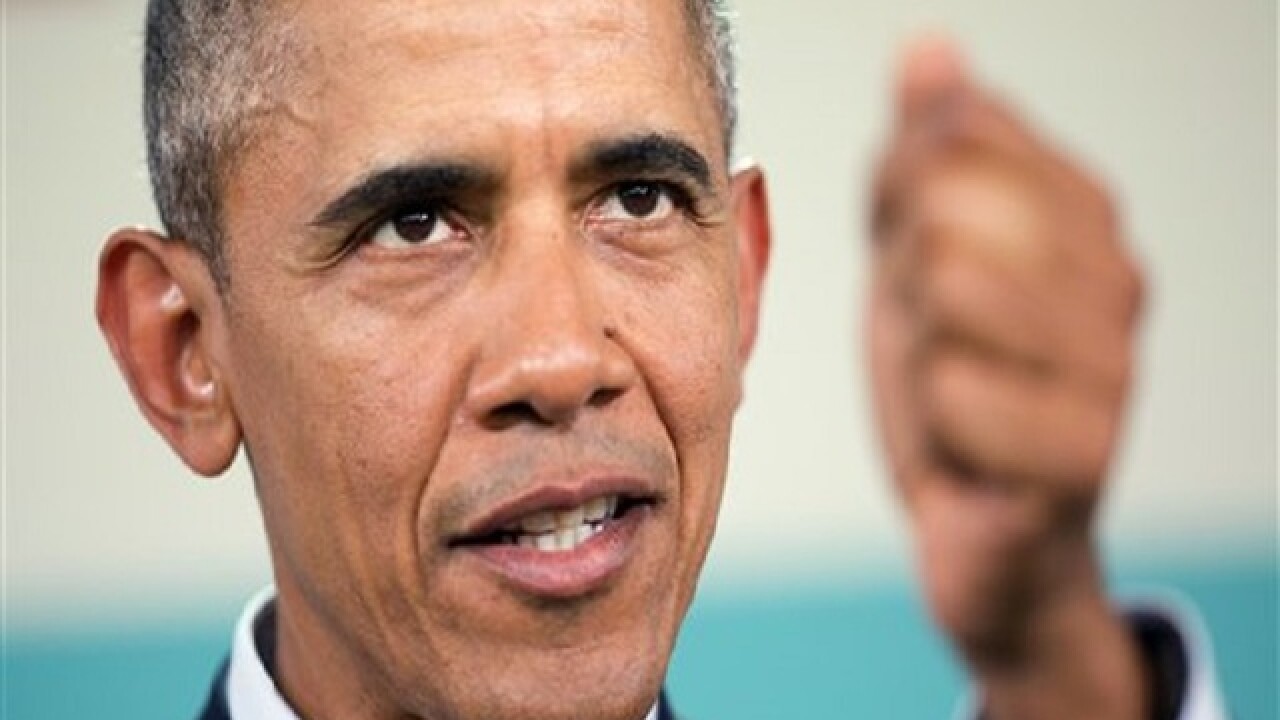 By: Associated Press
Posted at 10:01 PM, Feb 16, 2016
RANCHO MIRAGE, Calif. (AP) — President Barack Obama declared Tuesday that Republicans have no constitutional grounds to refuse to vote on a Supreme Court nominee, and he challenged his political foes in the Senate to rise above the "venom and rancor" that has paralyzed judicial nominations.
As Obama cast the dispute over filling the seat of the late Justice Antonin Scalia as a test of whether the Senate could function, there were early signs that Republican resistance could be eroding. Senate Judiciary Chairman Charles Grassley suggested he might be open to considering Obama's yet-to-be named nominee, an indication his party may be sensitive to Democrats' escalating charges of unchecked obstructionism.
"I intend to do my job between now and January 20 of 2017," Obama told reporters at a news conference. He said of the nation's senators, "I expect them to do their job as well."
Supreme Court Nominations By President | Graphiq
Obama was in California for a meeting of Southeast Asian leaders gathered for two days of diplomacy. But his attention was divided at that conference.
Since Scalia's unexpected death at a Texas ranch on Saturday, White House lawyers and advisers have been scrambling to refine and vet a list of potential replacements, while also devising a strategy to push a candidate through the Republican-led Senate.
Senate Majority Leader Mitch McConnell has said he doesn't think Obama should be putting a candidate forward. The Kentucky senator, as well as several Republicans up for re-election this year, say Obama should leave the choice up to the next president. The November election, they argue, will give voters a chance to weigh in on the direction of the court.
Obama dismissed that notion, insisting he will put forward a replacement and believes the Senate will have "plenty of time" to give the nominee a fair hearing and a vote. Democrats say Obama has every right and a constitutional duty to fill vacancies on the court until he leaves office next January.
Obama conceded the dispute reflects years of escalating partisan hostilities over judicial nominations and said Democrats' hands are not bloodless. Years of bickering have left the public accustomed to a situation where "everything is blocked" — even when there's no ideological or substantive disagreement, he said.
"This would be a good moment for us to rise above it," he said.
The pace of judicial confirmation always slows in a presidential election year, as the party that does not control the White House holds out hope that its candidate will fill vacant judgeships rather than give lifetime tenure to the other party's choices. In the past, lawmakers have sometimes informally agreed to stop holding hearings on lower court nominations during campaign season.
Obama argued Tuesday that "the Supreme Court's different."
"There's no unwritten law that says that it can only be done in off years. That's not in the constitutional text," he said. "I'm amused when I hear people who claim to be strict interpreters of the Constitution suddenly reading into it a whole series of propositions that aren't there. There's more than enough time for the Senate to consider in a thoughtful way the record of a nominee that I present and to make a decision."
McConnell has shown no signs of shifting his opposition, and several lawmakers facing heated elections have backed him up. But the Republican party may still be searching for a strategy.
In an interview with home state reporters, Iowa Republican Grassley said he "would wait until the nominee is made before I would make any decision."
Senate Minority Leader Harry Reid told reporters in Las Vegas Tuesday, "I'm very glad we've had a few renegade Republicans break from the pack and say there should be action taken" on a nominee.
The White House has been looking for cracks in the Republicans opposition as it deliberates on a nominee. If Republicans indicate they may hold hearings, Obama would have greater reason to name a "consensus candidate," a moderate nominee who would be at least somewhat difficult for Republicans to reject. If there's virtually no chance of Republicans bending, Obama might go another route — picking a nominee who galvanizes support among the Democrats' liberal base and fires up interest groups in the election year.
Obama on Tuesday would not tip his hand — much.
"I'm going to present somebody who indisputably is qualified for the seat and any fair-minded person, even somebody who disagrees with my politics, would say would serve with honor and integrity on the court," he said.
Asked if that meant he was leaning toward a moderate, Obama said, bluntly, "No."
He would not comment on whether he would consider appointing a candidate during a congressional recess, a last-ditch maneuver likely to further inflame partisanship in Congress.
Obama's dilemma arises, in part, because of the unusual timing. Supreme Court vacancies in presidential years are rare, largely because the justices avoid retiring when prospects for confirming successors are uncertain.
If Senate Republicans hold fast to their vow not to confirm anyone Obama nominates, the Supreme Court will operate with eight justices not just for the rest of this court term, but for most of the next one as well. High court terms begin in October, and the 80 or so cases argued in the course of a term typically are decided by early summer.
The court would be unable to issue rulings on any issue in which the justices split 4-4.
Court officials said Scalia's body will lie in repose Friday in the Supreme Court's Great Hall, after a private ceremony. The funeral mass Saturday will take place at the Basilica of the National Shrine of the Immaculate Conception in Washington.
Scalia's courtroom chair was draped in black on Tuesday.
Associated Press 2016