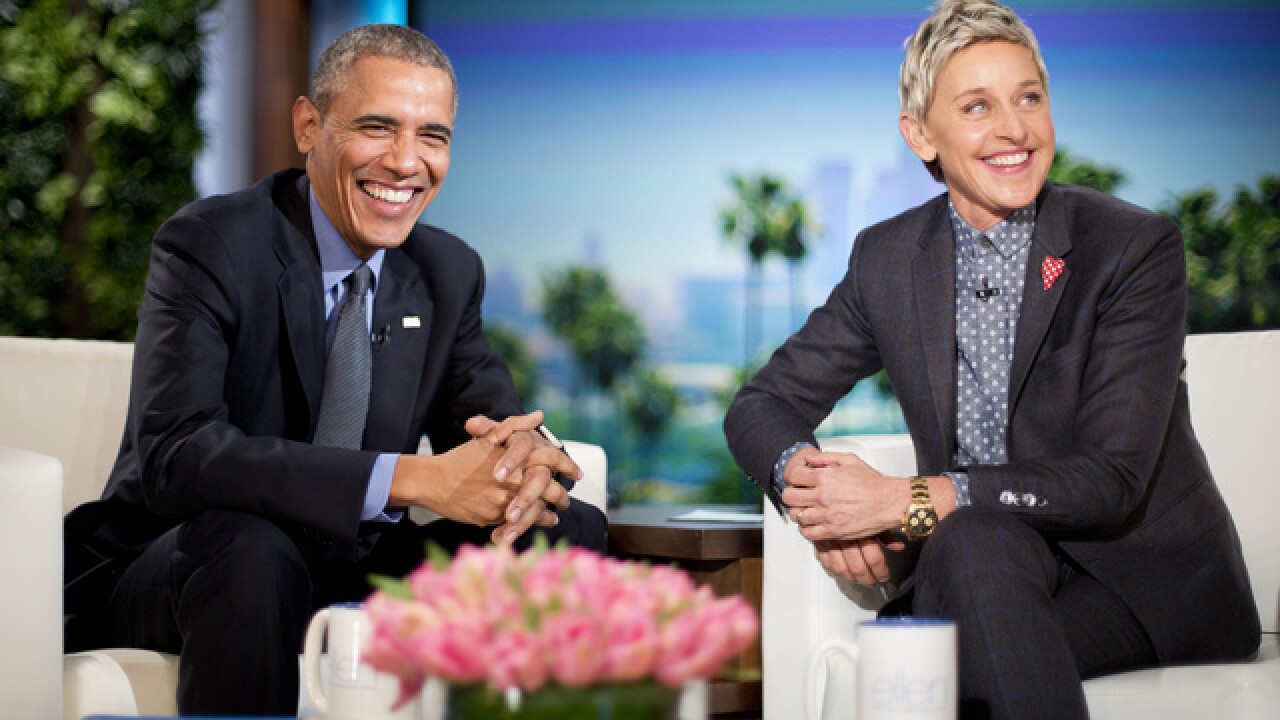 BURBANK, Calif. (AP) — Someone call the fire department. It's about to get hot at the White House.

President Barack Obama, who is spending another Valentine's Day apart from his wife, Michelle, did the next best thing short of celebrating the lovers' holiday with her: During the taping of Friday's nationally televised broadcast of "The Ellen DeGeneres Show," the president recited a love poem he says he had planned to deliver to the first lady in person.

"Somebody call the Situation Room because things are about to get hot," Obama said.

"Michelle, this Valentine's Day I'm going to treat you right. I'm going to make you some zucchini bread. Then I'll spread out some veggies on a plate just the way you like them," he said. "Then I'll give you a massage while you watch 'Ellen's Design Challenge' on HGTV. Because I love you so much, I Obamacare about you more than you even know."

Turning serious, Obama said: "Michelle, I've made a lot of great decisions as president. The best decision I ever made was choosing you. Thanks for putting up with me. I love you."

Mrs. Obama surprised her husband earlier in the broadcast by popping up on tape to recite her own poem. Sunday is their final Valentine's Day as president and first lady.

"Roses are red, violets are blue, you are the president and I am your poo," she said, joking about writing the ode while doing 100 pushups to help get her "creative juices" flowing.

Obama also revealed that he has considered going out in disguise and talked about how hard it will be to send daughter Malia off to college in the fall.

"She's one of my best friends. It's going to be hard for me not to have her around all the time, but she's ready to go," Obama said of his 17-year-old daughter, a senior at the exclusive Sidwell Friends School in Washington. "She's just a really smart, capable person and she's ready to make her own way."

He said he declined an invitation to speak at her upcoming graduation. "I said 'absolutely not,' because I'm going to be sitting there with dark glasses, sobbing," Obama said.

Obama, who for a long time has lamented the loss of anonymity that comes with the presidency, said he has thought about leaving the White House in disguise. But his good sense prevailed and he realized it wouldn't be a good idea. He says the Secret Service agents who protect him readily agreed.

"This friend of mine who's a producer on Broadway, she sent me this this fake mustache and I thought this is probably a bad idea," Obama said. "I'd have to pin my ears back."

When DeGeneres tells the president he's too recognizable to try to hide behind a mustache, Obama says: "That's a problem."

Disguises, though, have worked for some White House occupants. Hillary Clinton said she sometimes went for walks around the National Mall as first lady wearing dark sunglasses and a cap pulled down low. Mrs. Obama donned a similar getup several years ago for a shopping trip to a Target store in suburban Virginia, but was photographed by an Associated Press photographer.

Obama is in the midst of a weeklong visit to California. He spent Thursday raising money for Democrats and was likely to spend the weekend playing golf before welcoming Southeast Asian leaders to a summit beginning Monday at the Sunnylands estate in Rancho Mirage, California.