Obama rips Trump: 'It's wrong to spend all your time from a position of power vilifying people' 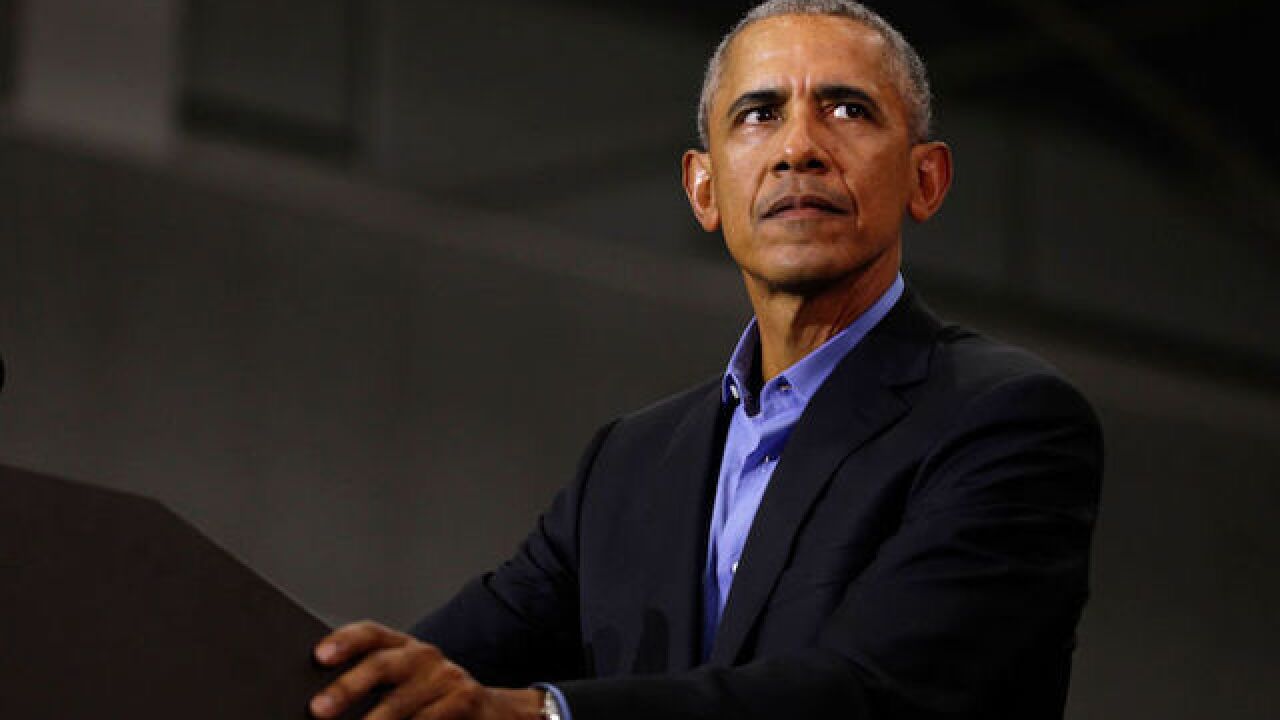 Image copyright 2018 Getty Images. All rights reserved. This material may not be published, broadcast, rewritten, or redistributed.
Bill Pugliano
<p>Former President Barack Obama speaks at a rally to support Michigan democratic candidates at Detroit Cass Tech High School on October 26, 2018 in Detroit, Michigan. Obama, and former Attorney General Eric Holder, who was also at the rally, are among approximately a dozen democrats who were targeted by mail bombs over the past several days. </p>

Former President Barack Obama made a thinly veiled jab at President Donald Trump on Friday evening, saying it was wrong to use a position of power for attacking others as "enemies of the people and then suddenly pretending that you're concerned about civility."

"I would like to think that everybody in America would think it's wrong to spend all your time from a position of power vilifying people, questioning their patriotism, calling them enemies of the people and then suddenly pretending that you're concerned about civility," he told a cheering crowd.

Trump has repeatedly called the media "fake news" and "the enemy of the people." Following the discovery of multiple packages sent to people whom the President has spoken against as political enemies, as well as a suspicious package in CNN's New York bureau at the Time Warner Center on Wednesday, Trump tweeted Thursday that "a very big part of the Anger we see today in our society is caused by the purposely false and inaccurate reporting of the Mainstream Media that I refer to as Fake News."

Obama said Friday, "It shouldn't be Democratic or Republican to say you don't try to punish political opponents or threaten the freedom of the press just because you don't like what they say."

Obama was in Michigan campaigning for Democratic Sen. Debbie Stabenow and Democratic gubernatorial candidate Gretchen Whitmer. He urged attendees to consider political events of the recent past, including Republicans' attempts to dismantle the Affordable Care Act and a voting record that contradicts recent claims that the GOP has always protected individuals with pre-existing conditions.

Obama made similar comments at a Milwaukee rally earlier in the day when he stumped for Wisconsin Democrats, including Sen. Tammy Baldwin and gubernatorial candidate Tony Evers, and made a few jabs at Trump.

"And you know how you know? If they did, they'd be up in arms right now as the Chinese are listening to the President's iPhone that he leaves in his golf cart," he added, a reference to a New York Times report. "It turns out, I guess it wasn't that important."

In what has become a tight governor's race, Evers has been leading over 2016 Republican presidential candidate and current Gov. Scott Walker in most polls. Baldwin leads several polls by double digits.

Former Vice President Joe Biden is slated to visit Wisconsin on Tuesday to campaign for state Democrats at rallies in Madison and Milwaukee.