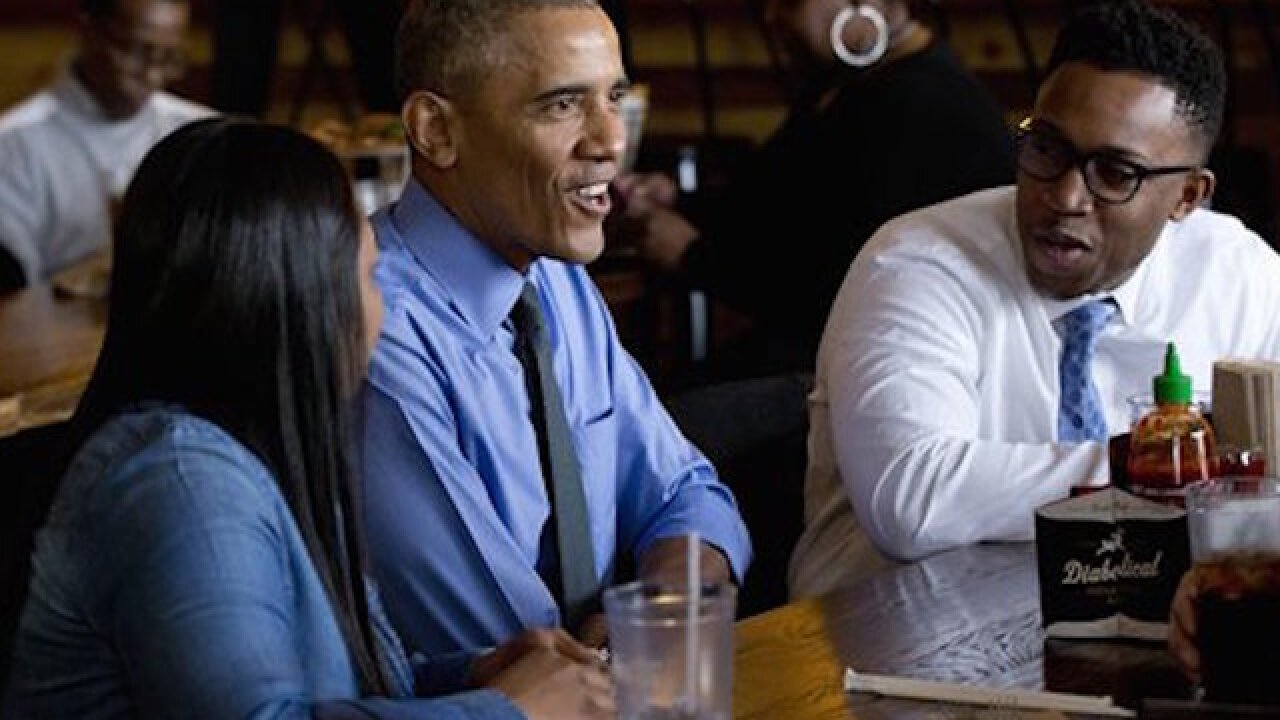 DETROIT (AP) — President Barack Obama hailed the revival of the nation's auto industry on Wednesday while acknowledging the water crisis in nearby Flint, Michigan, saying the detection of high levels of lead serve as a reminder that the government can't shortchange basic services.

Speaking to auto workers after taking in the North American International Auto Show, Obama said, "I know that if I was a parent up there, I would be beside myself that my kid's health could be at risk." He said he met with Flint's mayor the day before and promised federal help.

"I told her we are going to have her back and all the people of Flint's back as they work their way through this terrible tragedy," he said.

Obama sought to highlight how his administration provided the auto industry with billions of dollars in capital during the heart of the Great Recession even as many others were calling for the government to focus its resources elsewhere. He said the outcome of his administration's bet is evident through a much-improved economy. Americans purchased nearly 17.5 million vehicles last year, a record.

"What's true of Detroit is true of the country," he said. "I want people to remember how far we've come."

Obama spoke at the UAW-GM Center for Human Resources, the national headquarters of the joint relationship between the United Auto Workers and General Motors. His visit took place as longstanding problems with the drinking water in Flint have begun to capture the nation's attention.

Michigan Gov. Rick Snyder asked Obama on Wednesday to reconsider his denial of a federal disaster declaration to address the drinking water crisis, saying its severity poses an "imminent and long-term threat" to residents. Obama declared an emergency — qualifying the city for $5 million — but determined that it is not a disaster based on the legal requirement that such additional relief is intended for natural events, fires, floods or explosions.

In his appeal letter, Snyder called it a "narrow reading" and likened the crisis to a flood, "given that qualities within the water, over a long term, flood and damaged the city's infrastructure in ways that were not immediately or easily detectable." He also said the state and city cannot meet all the needs of Flint residents. He again painted a bleak picture of the city and said the "economic injury" from the crisis is significant.

The president spent nearly an hour at the auto show, looking at crash avoidance technology from ZF TRW and sitting in a 2017 Chevy Bolt EV, an all-electric car that will be available late this year. He also looked at a new Chrysler Pacifica minivan.

"You guys remember, 'Get Shorty,' right?" Obama said to reporters and photographers. "It's cool driving a minivan."

After arriving in Detroit, Obama had lunch at a brewery with Mayor Mike Duggan, a GM employee and others, then stopped at watch maker Shinola before heading to the show. He eventually veered off in the direction of a bright yellow 2017 Chevrolet Corvette.

"That one is juiced up a little more," he said.

The White House clearly intended to shine the spotlight on Detroit, but problems in Flint have intervened. The federal emergency declaration allows up to $5 million in assistance and requires a 25 percent match in funding from the state. The White House also appointed a Health and Human Services official to coordinate federal help provided to local responders and the state.

White House spokesman Eric Schultz said "primary responsibility" rests with state and local officials but that the president would do what he can to help.

The crisis began in 2014 when a state-appointed emergency manager switched Flint from Detroit water to Flint River water to save money. The corrosive water caused lead to leach from old pipes. Flint returned to the Detroit system in October after elevated lead levels were discovered in children.

Democratic presidential candidate Hillary Clinton brought more attention to the problem — and its potential political ramifications — when she declared during Sunday's presidential candidate debate that "every single American should be outraged" by the water crisis. "If the kids in a rich suburb of Detroit had been drinking contaminated water and being bathed in it, there would have been action," she said.

As to the auto industry, the U.S. treasury invested about $80 billion in it during the last recession. After counting loan repayments, dividends and stock sales, the federal government recovered $70.5 billion.

"I love the guy. He saved my job and my retirement," welder Randy Gossett of West Bloomfield said after Obama's speech. "He saved Michigan. Where do you go from there?"

Obama can't take all of the credit for the government's help. President George W. Bush initiated the auto bailout with more than $17 billion in short-term loans. Under ordinary circumstances, Bush said he wouldn't have favored intervening to prevent auto makers from going out of business, but in the midst of a financial crisis and recession, allowing the industry to collapse would send the country into a deeper and longer recession.

The Obama administration also provided additional capital to help Chrysler and GM continue operating as they restructured operations before and during a Chapter 11 bankruptcy proceeding. The companies shuttered plants, laid off workers and cut ties with thousands of dealerships.

Most Americans opposed providing a second round of government aid. A Gallup poll from February 2009 showed that about 58 percent opposed giving aid to automakers in danger of going bankrupt. Only about 41 percent supported the aid.

Even three years later, a slight majority said they disapproved of the bailout, with Republicans opposing it by a 3-to-1 margin, Gallup said.