Cop dies after being shot during traffic stop 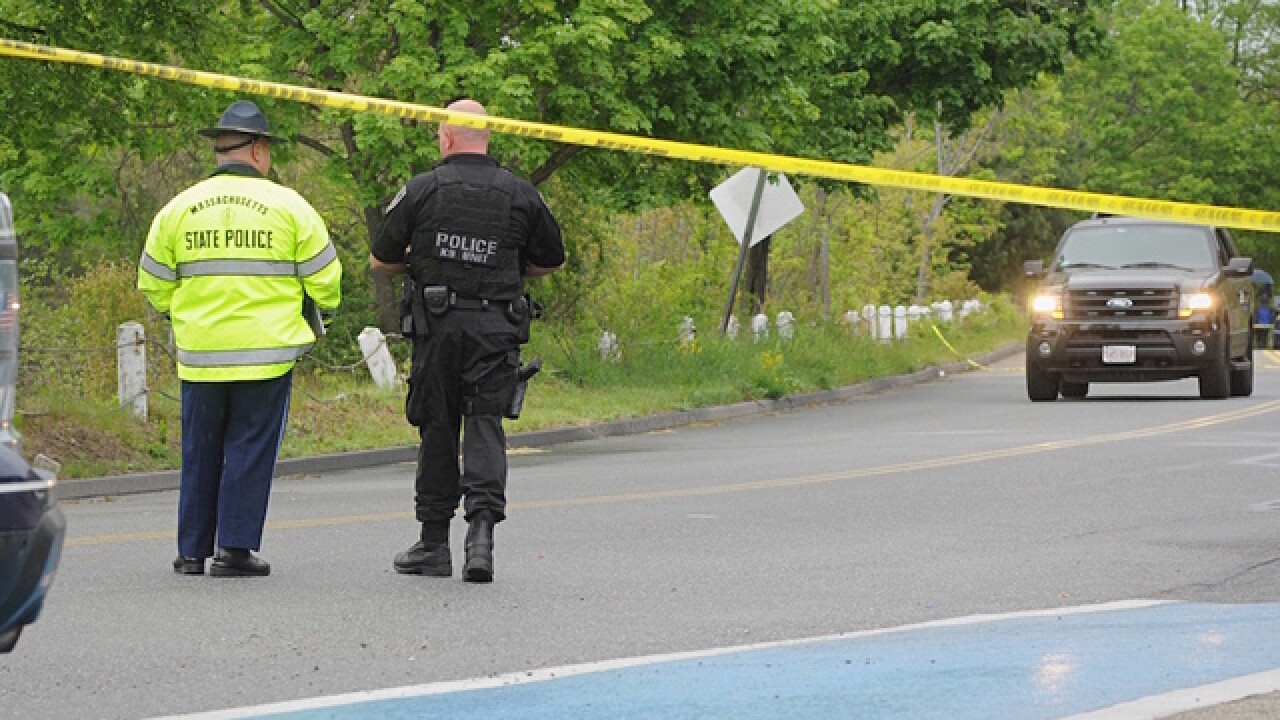 <p>Police guard the scene on Rochdale Street near Zabelle Ave where an Auburn Police officer was shot Sunday morning May 22, 2016, in Auburn, Mass. Massachusetts State Police say in a statement that an Auburn police officer was shot at about 12:30 a.m. Sunday. Auburn is about 45 miles southwest of Boston. Officials say the officer was transported to a hospital. The identity and medical condition of officer were not immediately available. The shooting is under investigation. (Rick Cinclair/Worcester Telegram & Gazette via AP) MANDATORY CREDIT</p>

AUBURN, Mass. (AP) — The suspect in the fatal shooting of a Massachusetts police officer Sunday was fatally wounded in an exchange of gunfire as authorities closed in on him, authorities said.

A Massachusetts State trooper also was wounded and taken to a hospital, officials said at a news conference. They did not release the trooper's name but said he was up and walking later this in the evening.

Auburn Police Chief Andrew Sluckis assured the central Massachusetts community that residents are safe and any threat to them is over.

A manhunt began after Auburn Police Officer Ronald Tarentino was fatally shot during a traffic stop about 12:30 a.m. Sunday. Tarentino stopped the vehicle on a residential road, and the vehicle's occupant shot the officer then fled the scene, Sluckis said earlier Sunday. Auburn is about 45 miles southwest of Boston.

The 42-year-old Tarentino was taken to UMass Medical Center in Worcester, where he was pronounced dead. He had been with the Auburn police force for two years and before that worked with the Leicester Police Department in his hometown.

After the manhunt concluded with the death of the suspect, he was identified as 35-year-old Jorge Zambrano.

"We will leave no stone unturned in our investigation to determine who was involved," Sluckis said. He called Tarentino a "dedicated and brave public servant."

State and local police officers lined up outside the hospital as a police vehicle, escorted by a procession, took Tarentino's body to the state medical examiner's office in Boston, where the vehicle was met by another large contingent of officers.

Tarentino was the second police officer to die in the line of duty in Massachusetts this year. State police Trooper Thomas Clardy was killed March 16 when his cruiser was struck by another vehicle.

Outside the Auburn police station, the American flag was lowered to half-staff. The town's residents left bouquets of flowers and miniature American flags piled at the bottom of a stone monument dedicated to law enforcement officers who've been killed in the line of duty.

Residents in Tarentino's Leicester neighborhood remembered him Sunday as a pleasant family man. Tarentino is survived by a wife and three children.

Phillip Stanikmas told the Worcester Telegram & Gazette that Tarentino kept an eye out for his 91-year-old mother when she was home alone. Stanikmas said he was "distraught" when Tarentino left the Leicester Police Department because he was a "great guy."

"I wanted him to stay in Leicester," Stanikmas said.