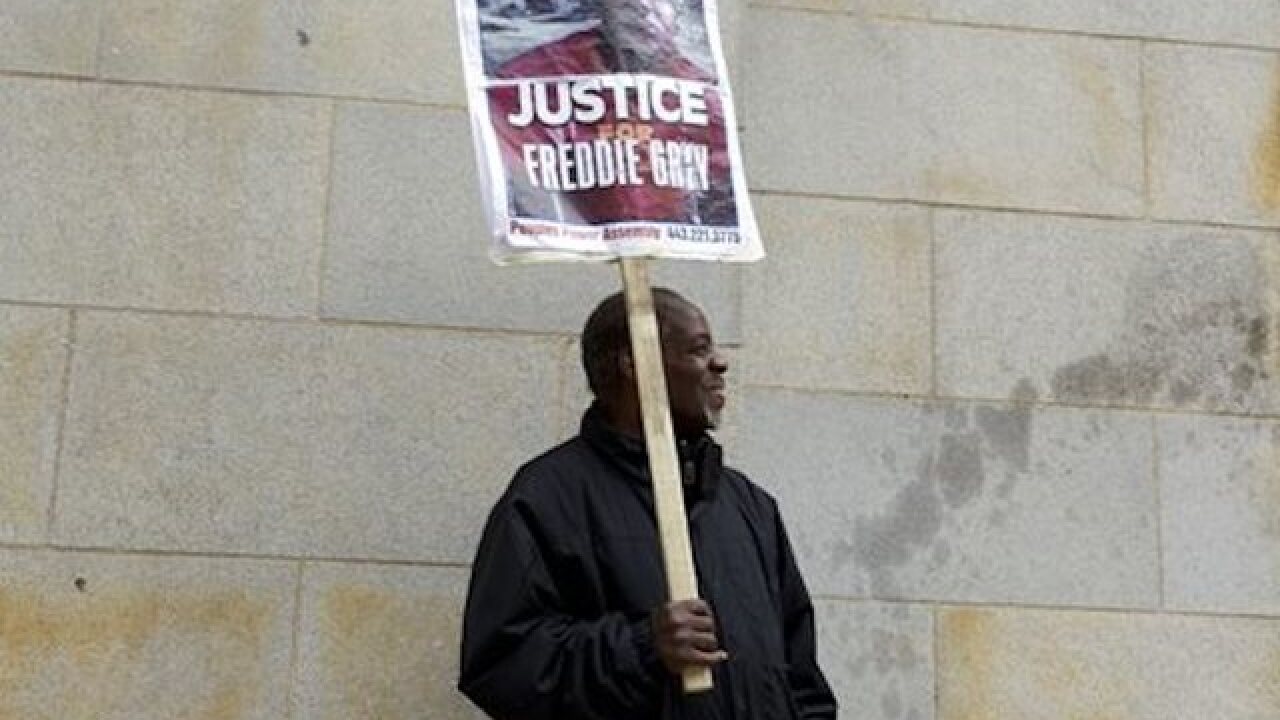 Jose Luis Magana
<p>Arthur B. Johnson Jr. protests outside of the courthouse in response to a hung jury and mistrial for Officer William Porter, one of six Baltimore city police officers charged in connection to the death of Freddie Gray, Wednesday, Dec. 16, 2015, in Baltimore Md. (AP Photo/Jose Luis Magana)</p>

BALTIMORE (AP) — As jurors deliberated the fate of one of six police officers charged in the death of Freddie Gray, Baltimore braced for a possible repeat of the protests, destruction and dismay that engulfed the city in April, when Gray died of a broken neck in the back of a police van. But instead of a dramatic conclusion, there was confusion.

Baltimore Circuit Judge Barry Williams declared a mistrial Wednesday after jurors made it clear they were hopelessly deadlocked over whether Officer William Porter had committed any crimes due to actions he didn't take prior to Gray's death.

The mistrial leaves prosecutors, defense attorneys and a populace anxious to find closure back at square one. Lawyers on both sides gathered in Circuit Judge Barry Williams' chambers Thursday morning; they were scheduled to discuss dates for a possible retrial. The lawyers left about 30 minutes after they started arriving, and they declined to comment to reporters outside, citing Williams' gag order in the case. A uniformed deputy was stationed outside the door as they met.

Members of the community still trying to process the news gathered outside the courthouse Wednesday afternoon following the verdict and about 100 demonstrators carried signs of protest as they marched peacefully through the streets.

"I'm not expecting our community to repeat April," said Erika Alston, a community leader who runs a children's after-school program in the heart of West Baltimore, in reference to the violence, looting and unrest that erupted the day of Gray's April 27 funeral. "But it is a bit of a kick in the chest."

Jurors took three days to deliberate on the charges against Porter, which included manslaughter, assault, reckless endangerment and misconduct in office. On Tuesday, after only nine hours of deliberation, they told Williams they were deadlocked. He sent them back to try again.

The message was the same on Wednesday, after roughly 16 hours of deliberation. The jurors said they were at an impasse on every charge. A unanimous verdict, they told Williams, was impossible.

For a week, Democratic Mayor Stephanie Rawlings-Blake had urged citizens to remain calm and peaceful no matter the outcome, while Police Commissioner Kevin Davis canceled leave for the department's officers in anticipation of the jury's decision.

But the mistrial was a disappointment for some residents in need of a definitive resolution. Small crowds of protesters gathered with signs and bullhorns. They marched through downtown, converging on City Hall, while scores of police followed, forming lines in the streets to keep them away from the courthouse. Two demonstrators were arrested outside the courthouse.

With the impact of the trial muted, that left many to wonder what comes next.

Gray died April 19, a week after his neck was broken in the back of a police van.

Prosecutors said Porter is partially to blame because he didn't call an ambulance when Gray indicated he needed medical aid and didn't buckle Gray into a seat belt, leaving him handcuffed and shackled but unrestrained in a metal compartment, unable to brace himself when the van turned a corner or braked.

Porter told jurors he didn't think Gray was injured when he checked on him on the floor of the wagon, and helped him onto a bench inside. Instead, Porter told the van driver, Caesar Goodson, to take Gray to the hospital. Porter also said he didn't buckle Gray in because it wasn't his responsibility; the wagon driver is in charge of making sure the prisoner is strapped in while the van is moving.

But jurors couldn't decide whether Porter's failures amounted to a crime — an outcome legal analysts say isn't surprising given the difficulty of proving a case with no eyewitnesses or unequivocal evidence as to exactly how or when Gray was critically injured.

Steve Levin, a Baltimore defense attorney and former federal prosecutor who followed the case, said the result was unfortunate for both sides. Prosecutors did not present strong evidence on the more serious charges against Porter, but the hung jury suggests that at least one juror wanted to convict him on those counts, Levin said.

"The state proved beyond a reasonable doubt that Freddie Gray died. Beyond that, they weren't able to prove anything," Levin said. "They proved a tragedy, but I don't think they proved a crime."

Porter was the first of six to stand trial. Without postponements or continuances, his case moved swiftly and his trial began just seven months after Gray's death.

Van driver Goodson, who faces the most serious charge of second-degree "depraved-heart" murder, is next; his trial is scheduled for Jan. 6. He also is charged with manslaughter, second-degree assault, reckless endangerment and misconduct in office.

Prosecutors intended to call Porter to testify against Goodson and another officer whose trial is slated to begin after Goodson's. The mistrial will likely complicate prosecutors' plans, and as such, their strategy moving forward.

Prosecutors will have a harder time calling Porter to testify because of his Fifth Amendment right not to incriminate himself, according to attorney Warren Alperstein. Options for the state could include granting Porter immunity in exchange for his testimony, trying to persuade the judge to postpone the other trials while retrying Porter or striking him from their witness list altogether.

David Harris, a law professor at the University of Pittsburgh with expertise in policing issues, said State's Attorney Marilyn Mosby created a false impression about the simplicity of obtaining convictions with her swift decision to charge six officers in Gray's death.

"It was never going to be easy. Prosecution of police officers is never easy, but when you look at some of the facts in this case, you've got to understand nothing here is a slam dunk," Harris said.

Gray's stepfather said at a news conference Wednesday that the family isn't upset by the mistrial, and looked forward to 12 fresh jurors being given a new chance to evaluate the case.

"We are not at all upset with them and neither should the public be upset," Richard Shipley said. "They did the best that they could. ... We are confident there will be another trial with a new jury."

Some residents who saw charging the police officers as a step toward justice and healing in the city said the mistrial was a failure to deliver on that promise.

Duane "Shorty" Davis, a community activist, said he was not surprised.

"If any of the officers get convicted, it will be a surprise to me," Davis said, adding that he doesn't think Mosby has been sincere in her vow to prosecute the officers but was compelled to bring charges after the April unrest.