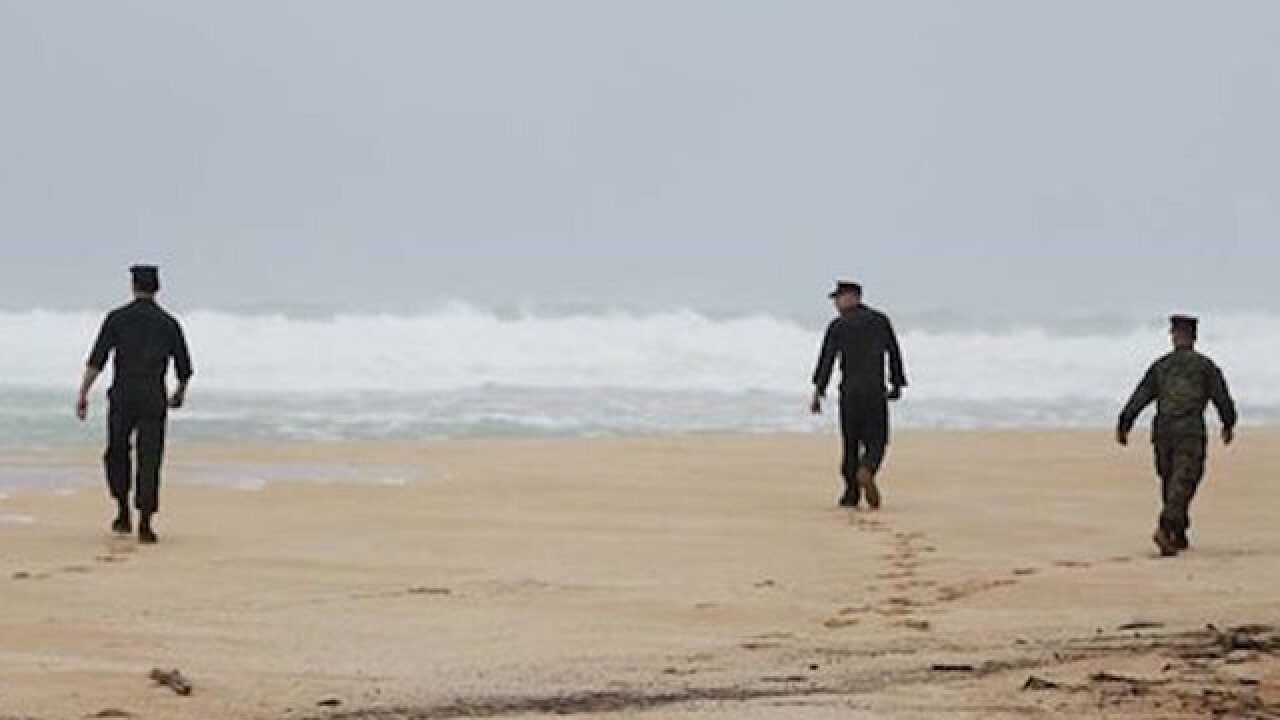 Cpl. Ricky Gomez
<p>This Friday, Jan. 15, 2016, photo provided by the U.S. Marine Corps shows Marines attached to Marine Heavy Helicopter Squadron 463 search for debris of a helicopter mishap in Haliewa Beach Park, Hawaii. Rescuers battled winds of up to 23 mph and waves up to 30 feet as they searched for 12 Marines who are missing after two helicopters they were in crashed off the Hawaiian island of Oahu. (Cpl. Ricky S. Gomez/U.S. Marine Corps via AP)</p>

HONOLULU (AP) — Officials Tuesday suspended the massive search for 12 Marines who were aboard two helicopters that crashed off Hawaii last week.

The around-the-clock effort failed to locate any sign of the 12 service members despite five days of searching by several agencies.

Officials said at a late afternoon news conference that the Marine Corps was transitioning to "recovery and salvage efforts" and a memorial was planned for Friday at Marine Corps Base Hawaii.

The search began late Thursday when a civilian on a beach reported seeing the helicopters flying and then a fireball.

The Marines were alerted when the CH-53E helicopters carrying six crew members each failed to return to their base at Kaneohe Bay following a nighttime training mission. Hours later, a Coast Guard helicopter and C-130 airplane spotted debris 2 1/2 miles off of Oahu.

The crash was near the north shore, but the search area spanned from the western coast of Oahu to the northeast corner of the island.

The transport helicopters were part of the 1st Marine Aircraft Wing at Marine Corps Base Hawaii. Known as Super Stallions, they are the U.S. military's largest helicopter, capable of carrying a light armored vehicle, 16 tons of cargo or a team of combat-equipped Marines, according to a Marine Corps website.

The Coast Guard initially reported that the choppers had collided, but the Marines said later it wasn't yet known if there was a collision. The cause remains under investigation.

All four life rafts from the helicopters were later found empty. There was no indication anyone had been on any of the rafts, based on their condition and the lack of any personal effects, the Coast Guard said.

Authorities searched for survivors around the clock. The Coast Guard assumes the best-case scenario when considering how long someone in the right equipment and right conditions could survive, Coast Guard Chief Petty Officer Sara Mooers has said.

"We err on the side of caution because the last thing that anybody wants is to suspend the search when there's still a possibility of finding somebody," she said Monday.

Aircrews wear personal flotation devices with their flight suits and get additional training on top of survival swimming training, the Marines said.

Some of the life rafts were inflated, but it was unclear how they got that way, Mooers said. There are various ways that could happen, including a cord being pulled by debris, said Irish, the Marine captain.

People have been found days or even weeks after getting lost at sea, Mooers said.

They would have to survive the crash and then possible dehydration, exposure and fatigue, said Mario Vittone, a retired Coast Guardsman who is an expert on sea survival. Survival seems unlikely, Vittone said, but he noted that he doesn't know all the circumstances.

The missing crew members are: