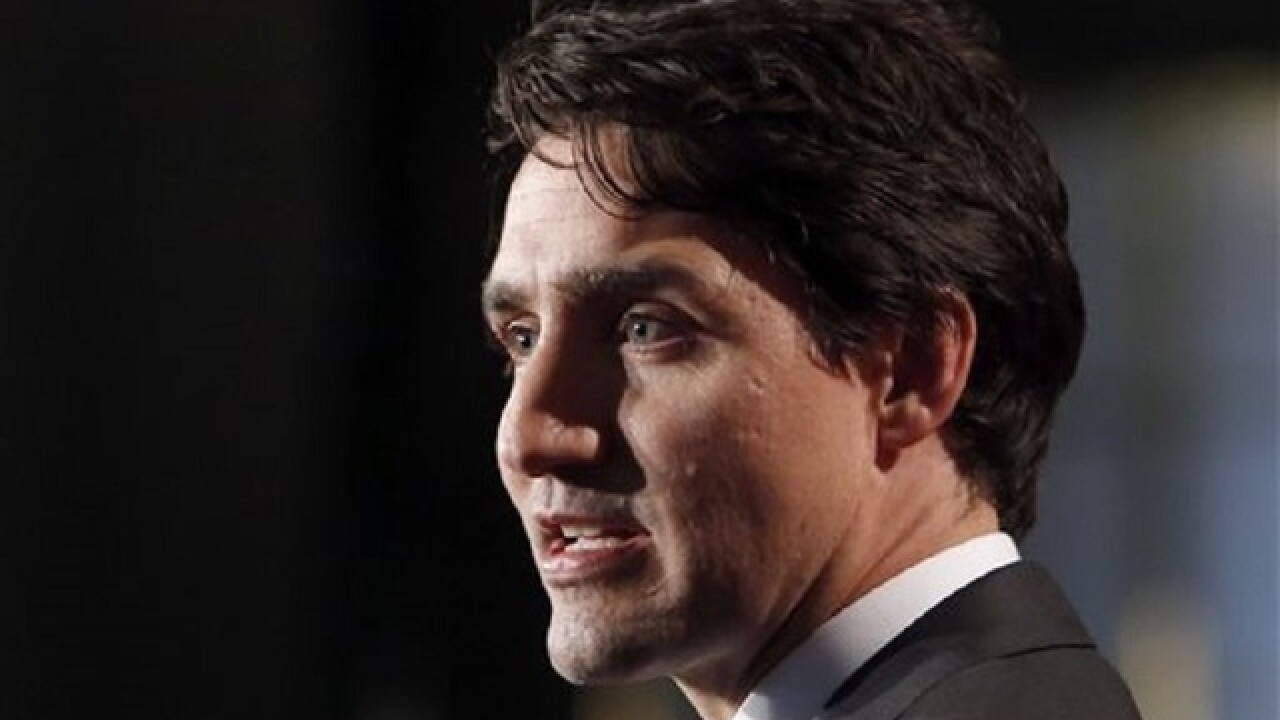 TORONTO (AP) — Canadian Prime Minister Justin Trudeau apologized "unreservedly" for making physical contact with a female opposition member of Parliament who said Trudeau elbowed her in the chest as he waded through a group of mostly opposition lawmakers.
Opposition lawmaker Ruth Ellen Brosseau said she was elbowed in the chest and had to leave the House of Commons chamber Wednesday after feeling overwhelmed.
"I was elbowed in the chest by the prime minister and then I had to leave. It was very overwhelming," she said. "I missed the vote because of this."
Footage from the House of Commons television feed shows Trudeau wading into a clutch of lawmakers, mostly opposition members, and pulling a lawmaker through the crowd in order to get the vote started. As Trudeau turns around to pull the lawmaker through, Brosseau can be seen reacting with discomfort.
Trudeau, a boxer and former bar bouncer, later stood up in Parliament and said it wasn't his intention to hurt anyone as he attempted to escort the lawmaker though a throng of opposition lawmakers in the chamber. Trudeau said he thought the man was being impeded as he walked up the aisle of the chamber and wanted to help him.
"I took it upon myself to go and assist him forward, which was I now see unadvisable as a course of action," said Trudeau, who characterized his actions as "unacceptable."
"I apologize for that unreservedly and I look for opportunities to make amends," he said.
Opposition New Democrat lawmaker Peter Julian called it a "pretty violent push" and said he had never seen such behavior in his 12 years in Parliament. "Physical force in this House is never permitted," he said. Opposition Conservative Andrew Scheer said he was sitting across from Trudeau and said it was clear he lost his temper.
"He was motivated by anger and lost his temper," Scheer said. "It is very, very unfortunate. We had a member of Parliament that wasn't able to vote."
Opposition New Democrat leader Thomas Mulcair screamed at Trudeau in the chamber and lawmakers intervened to make sure things didn't escalate.
Tempers have been running high as the government pushes through a motion to limit debate on its controversial assisted-dying legislation.
Opposition Conservative lawmaker Jason Kenney tweeted that if previous Prime Minister Stephen Harper had ever physically bullied members of Parliament like Trudeau, there would be immediate and widespread demands for his resignation.
"No sane person watching that video could come to any conclusion but that it was an accident. Stupid of him to be over there, but come on," political commentator Andrew Coyne tweeted.
Green party Leader Elizabeth May, whose seat in the House of Commons, gave her a ringside seat for the encounter and subsequent arguments, called for calm at one point — and suggested that the New Democrat lawmakers may have been milling about on the floor in order to delay the vote.
"It was most unwise of the prime minister to attempt to move along the vote," May said. "But the second contact with my friend (Brosseau), which is certainly the one that was the most emotional for the member involved, was clearly, from my perspective ... unintentional."
She added: "He had not seen her behind him. That is the truth. Now you can like it or not like it."
The Speaker concluded that Brosseau's privileges as a Member Parliament had been breached, which means the encounter will be examined by an all-party committee.
Associated Press 2016