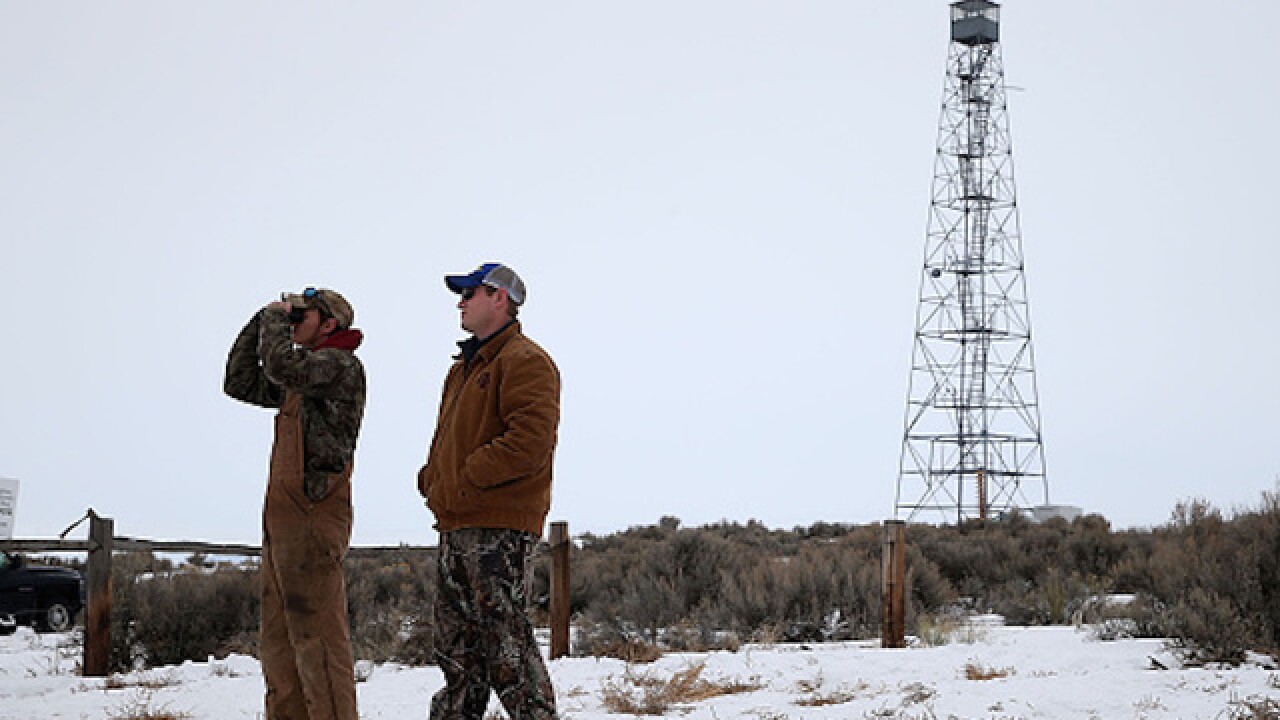 Justin Sullivan
<p>BURNS, OR - JANUARY 05: Members of an anti-government militia stand guard at a checkpoint in front of the Malheur National Wildlife Refuge Headquarters on January 5, 2016 near Burns, Oregon. An armed anti-government militia group continues to occupy the Malheur National Wildlife Headquarters as they protest the jailing of two ranchers for arson. (Photo by Justin Sullivan/Getty Images)</p>

BURNS, Ore. (AP) — The armed takeover of an Oregon wildlife refuge dwindled Thursday to just four holdouts demanding assurances they will not be arrested by the FBI if they surrender.

"We're still stuck here, four of us. They're telling us it's safe to leave, but it's not safe," a spokesman believed to be occupier David Fry said in a video posted on YouTube nearly four weeks into the standoff in the frozen high desert.

The FBI had no immediate comment on the negotiations or the holdouts' demands, saying only that it was trying to "empty the refuge of the armed occupiers in the safest way possible."

The occupation by ranchers and others began on Jan. 2, and at one point there were a couple of dozen people holed up, demanding that the federal government turn public lands over to local control. But the compound has been emptying out since the arrest of their leader, Ammon Bundy, and 10 others over the past few days.

With the Malheur National Wildlife Refuge surrounded by the FBI, the occupiers have been posting videos on YouTube showing them around a campfire, along with pickup trucks, an American flag, guns, an old car and assorted clutter.

"We want to live. We want to go home peacefully," one of the men, who was not identified, said in a video posted on Thursday. He was also shown dancing outdoors to a country-western tune with a woman identified as his wife.

Oregon Public Broadcasting spoke with the holdouts and identified them as Fry, who is from Ohio, husband and wife Sean and Sandy Anderson of Idaho, and Jeff Banta of Nevada. Fry told the station that Sean Anderson faces a federal arrest warrant.

In one of the videos posted Thursday, the speaker — believed to be Fry — said: "We're asking, just drop the charges and we're willing to go. But if they're not willing to do that, we're all just willing to stay here and see what happens."

All 11 people under arrest have been charged with a felony count of conspiring to impede federal officers from carrying out their duties through force or intimidation.

Bundy and seven other main figures in the takeover were arrested earlier in the week, most of them in a traffic stop Tuesday night that erupted in gunfire and left one follower dead. On Wednesday, three more followers surrendered after Bundy pleaded in a statement from jail: "Please stand down. Go home and hug your families."

Meanwhile, Bundy followers gave conflicting accounts of how Robert Finicum, a spokesman for the group, died in the clash on a remote highway during an operation led by the FBI.

One said Finicum charged at officers, who then shot him. A member of the Bundy family said Finicum did nothing to provoke the officers.

The FBI has refused to release details of the confrontation.

In a statement issued through his lawyer, Bundy said FBI agents told him the shooting was recorded on video. He said he is waiting to review the footage because "questions must be answered."

Bundy also reiterated his appeal to the last holdouts to give up: "Turn yourselves in and do not use physical force."

Bundy is the son of Nevada rancher Cliven Bundy, who was involved in a tense 2014 standoff with the government over grazing rights.

The group came to the desert of eastern Oregon in the dead of winter to decry what it calls onerous federal land restrictions and to object to the prison sentences of two local ranchers convicted of setting fires.

In a criminal complaint Wednesday, federal authorities said the armed group had explosives and night-vision goggles and was prepared to fight.

The charges against Bundy and others say that the refuge's 16 employees have been prevented from reporting to work because of threats of violence.