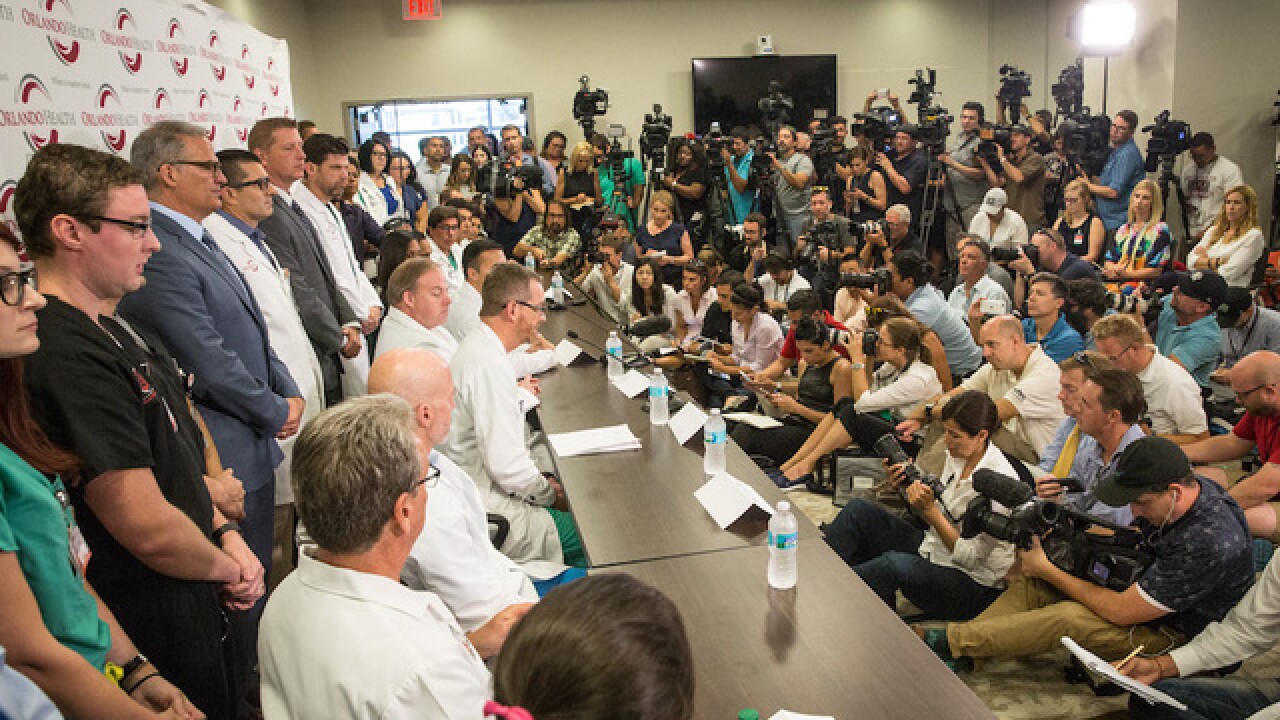 Loren Elliott
<p>Nine trauma surgeons and survivor Angel Colon speak to the media for the first time about the aftermath of the mass shooting that killed dozens and hospitalized many more at an Orlando gay nightclub, during a press conference at the Orlando Regional Medical Center in Orlando, Fla., on Tuesday, June 14, 2016.</p>

ORLANDO, Fla. (AP) — The first victim of the nightclub shooting to reach the hospital was relatively stable, and doctors working the overnight shift hoped any others would arrive in a similar condition.

Then five more came, in much worse shape. And then more, and more still, until people bleeding from gunshot wounds were lining up inside the Orlando Regional Medical Center.

"They were dropped off in truckloads, in ambulance-loads," said Dr. Kathryn Bondani.

The trauma bay quickly overflowed, forcing doctors performing triage to move critically injured people elsewhere and focus on those whose lives were most in danger.

Luckily, the Pulse nightclub isn't far from the region's main trauma hospital, but its emergency room staff usually gets advance word that severe cases are on their way. In this case, victims started arriving within minutes of the shooting, and the staff had to scramble.

Choking up a bit, Dr. Chadwick Smith described how he and others called for reinforcements.

Nurses and technicians also arrived, many without being told to come, turning much of the hospital into emergency response areas. Doctors quickly expanded from two operating rooms to six, performing surgery after emergency surgery. Another eight operations were scheduled for Tuesday.

Angel Colon was shot several times in his leg, and his bones shattered as he was trampled in the crowd. Then he was hit again, in the hand and hip, as the gunman shot the injured, apparently "making sure they're dead." Later, as a policeman dragged him to safety, his body was cut by shards of broken glass.

Appearing at a news conference Tuesday in a wheelchair, Colon turned to the doctors and nurses who treated him and said: "I will love you guys forever."

The trauma center is used to handling four or five people each shift. A total of 44 patients arrived that night, with all manner of bullet gunshot wounds, broken bones and other injuries. Nine of them were too far gone to be saved, said Dr. Michael Cheatham.

Of the rest, 27 remained hospitalized Tuesday, including six in intensive care. Two of these patients may be permanently disabled, but no patient has succumbed since the nine who were pronounced dead on arrival, he said.

Eleven victims were treated at other hospitals, and most of them have been released, Cheatham said.