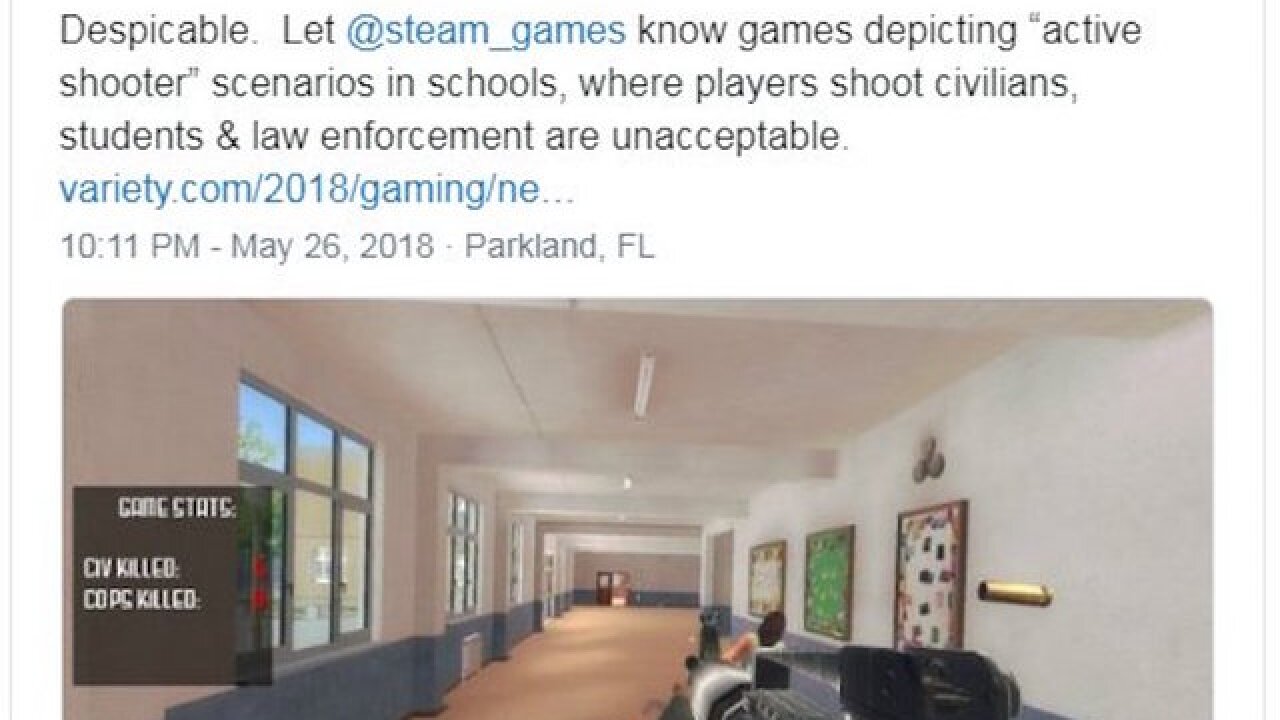 Politicians and parents of slain students in Parkland, Florida, are expressing outrage about a forthcoming video game in which players can simulate being an active shooter to terrorize a school.

The game, "Active Shooter," is set to be released June 6 on Steam, a gaming platform owned by Valve Corp., a video game developer based in Washington state. The game was developed by Revived Games and published by a Russian company called Acid, which plans to sell the game for between $5 and $10 on the Steam platform.

Marketing materials for the game say players will be able to choose between portraying a SWAT team member responding to a shooting or portraying an actual shooter whose objective is to "hunt and destroy."

Ryan Petty, who lost his 14-year-old daughter Alaina in the February shooting at Marjory Stoneman Douglas High School, called the game "despicable" in a tweet.

"It's disgusting that Valve Corp. is trying to profit from the glamorization of tragedies affecting our schools across the country," Petty said in a statement. "Keeping our kids safe is a real issue affecting our communities and is in no way a 'game.'"

Fred Guttenberg, whose daughter Jaime also died in the Parkland shooting, is urging people to boycott the game.

"This company should face the wrath of everyone who cares about school and public safety and it should start immediately. Do not buy this game for your kids or any other game made by this company," he tweeted.

Bill Nelson, the senior US Senator from Florida, also criticized the game Monday.

"This is inexcusable. Any company that develops a game like this in wake of such a horrific tragedy should be ashamed of itself," he tweeted.

More than 25,000 people have signed an online petition urging Valve not to release the game.

"This is horrific," wrote Stephanie Robinett, a Seattle-area woman who created the petition. "How can anyone sleep at night knowing that they are profiting from turning deadly school shootings into entertainment?"

"Active Shooter" is not the first video game to simulate a school shooting scenario. But it may be the first new such game since 27 people died in recent mass shootings at high schools in Parkland and Santa Fe, Texas, heightening discussions around preventing gun violence in schools.

The game's Steam page includes a statement that reads, "Please do not take any of this seriously. This is only meant to be the simulation and nothing else. If you feel like hurting someone or people around you, please seek help from local psychiatrists or dial 911."

"Active Shooter's" developer also posted a disclaimer on a preview for the game, saying its content is not recommended for children.

"Revived Games believes violence and inappropriate actions belong in video games and not (in the) real world, and insists that in no event should anyone attempt to recreate or mimic any of the actions, events or situations occurring in this game," it said.

Revived Games did not immediately respond to a request for comment.

In an update posted on Steam last week, Acid said that intense criticism of the game has made them reconsider whether to publish it with the option allowing gamers to assume the role of the shooter.

"I have wrote to Valve regarding this game and (am) waiting for the reply," the update said. "After receiving such high amount of critics and hate, I will more likely remove the shooters role in this game by the release, unless if it can be kept as it is right now."