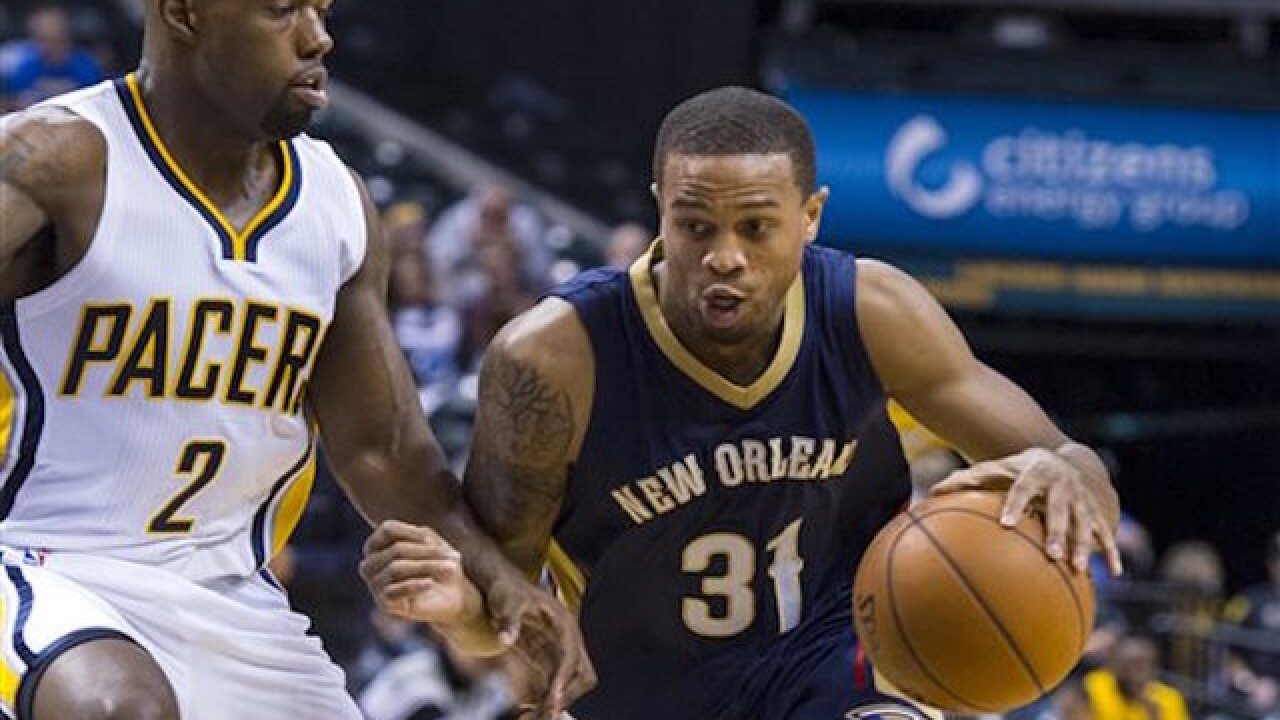 Copyright Associated Press
Doug McSchooler
<p>In this Oct. 3, 2015, file photo, New Orleans Pelicans' Bryce Dejean-Jones (31) drives the ball around the defense of Indiana Pacers' Rodney Stuckey (2) during the first half of a preseason NBA basketball game in Indianapolis. Police say Saturday, May 28, 2016, Dejean-Jones was fatally shot after breaking down the door to a Dallas apartment. Sr. Cpl. DeMarquis Black said in a statement that officers were called early Saturday morning and found the 23-year-old player collapsed in an outdoor passageway. He was taken to a hospital where he died. (AP Photo/Doug McSchooler)</p>

A man living at the apartment was sleeping when he heard his front door kicked open, Dallas Police Senior Cpl. DeMarquis Black said in a statement. When Dejean-Jones began kicking at the bedroom door, the man retrieved a handgun and fired.

Officers who responded found Dejean-Jones collapsed in an outdoor passageway, and he later died at a hospital. He was 23.

"We are devastated at the loss of this young man's life," the Pelicans said in a statement.

It is legal in Texas for someone to use deadly force in order to protect themselves from intruders.

"I just lost my best friend/cousin last night enjoy life because you never know if tomorrow is guaranteed," Shabazz Muhammad of the Minnesota Timberwolves wrote on Twitter.

Julie Keel, a spokeswoman for Camden Property Trust, the real estate company that owns the apartment complex in Dallas, confirmed that the complex's apartment manager had sent out an email to residents saying that the person who had been shot had been trying to break into "the apartment of an estranged acquaintance" and that this person had "inadvertently" broken into the wrong apartment.

Black said he could not confirm that Dejean-Jones was trying to access an acquaintance's apartment.

In Dejean-Jones' only NBA season, which ended in February because of a broken right wrist, the 6-foot-6 guard started 11 of 14 games and averaged 5.6 points and 3.4 rebounds.

"Bryce inspired countless people with his hard work and perseverance on his journey to the NBA, and he had a bright future in our league," Silver said in a statement issued Saturday.

Dejean-Jones was part of the 2014-15 Iowa State team that went 25-9, captured a Big 12 title and made a fourth consecutive trip to the NCAA Tournament. He was fourth on the team in scoring, averaging 10.5 points in 33 games. He shot a career-best 47.6 percent in his lone season as a Cyclone. He also played at Southern California and UNLV and was signed by the Pelicans last summer after not being selected in the 2015 draft.

"Bryce's dedication and hard work on his journey to the NBA will forever serve as an inspiration to us all," said National Basketball Players Association executive director Michele Roberts, who had posted a link to the story of Dejean-Jones' death on Twitter and wrote that it was "The news I pray every day I never have to hear."

Dejean-Jones was suspended late in the 2013-14 season from UNLV for conduct detrimental to the team, and announced that he was leaving USC midway through the 2010-11 season.

"This is a very, very sad and tragic day for everyone that's a part of the Cyclone basketball family," Iowa State coach Steve Prohm said.

Former Cyclones coach Fred Hoiberg, now the coach of the NBA's Chicago Bulls, added in a statement that Dejean-Jones was a "passionate and talented player that lived out his dream of playing in the NBA through hard work and perseverance."

Besides Muhammad, several NBA players reacted on Twitter on Saturday.

"Crazy how life is man," wrote Brooklyn Nets guard Shane Larkin. "Prayers out to Bryce Dejean Jones and his family."

Added Quincy Pondexter, one of Dejean-Jones' teammates with the Pelicans: "This Can't be real life... Rest easy lil bro."