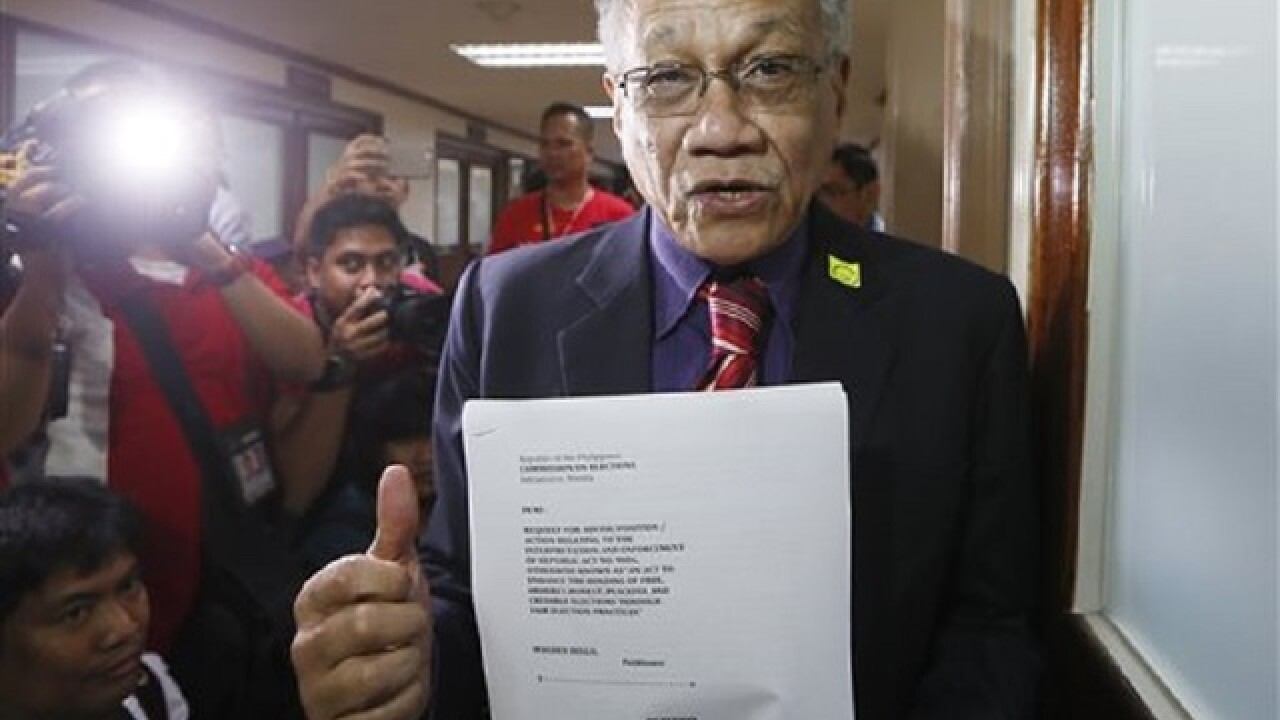 MANILA, Philippines (AP) — World boxing star Manny Pacquiao's April 9 bout with Timothy Bradley came under a cloud Monday when the Philippine elections commission was asked to stop the Las Vegas match because it would give the Filipino slugger and senatorial candidate massive publicity.
Former Rep. Walden Bello, also a senatorial candidate in the May 9 elections, said in his petition to the Commission on Elections that allowing the welterweight fight to proceed during the campaign period would violate a law giving candidates equal access to media publicity and a ban on TV and radio programs favoring a candidate.
Bello, a left-wing politician who has not fared well in voter-preference polls ahead of the elections, said the fight, which Pacquiao declared would be his last, should be postponed until after the elections.
Pacquiao, 37, has not fought since losing to Floyd Mayweather Jr. last May in the richest fight ever. Pacquiao reportedly made more than $100 million for that fight, and is guaranteed $20 million to fight Bradley.
The eight-division champion is the Philippines' most famous athlete. He has represented Sarangani province in the Philippines' House of Representatives since May 2010, though he has drawn criticism for seldom showing up for legislative duties.
Pacquiao will face Bradley at the MGM Grand Garden Arena in Las Vegas, completing a trilogy between two of the world's top welterweights. Bradley won a hotly disputed split decision over Pacquiao in their first meeting in June 2012, but Pacquiao won by unanimous decision in the April 2014 rematch.
The Bible-quoting Pacquiao has been embroiled in controversy recently for saying that people in same-sex relations are "worse than animals," drawing the ire of netizens and celebrities. He made the comment when asked by a local TV network about his views on same-sex marriage, and video of his response was posted on the network's website last week.
In response to the remark, apparel giant Nike said that it would no longer have any business dealings with Pacquiao, and that that it found his comments "abhorrent."
Pacquiao has apologized to people hurt by his comments and said he respects Nike's decision. But he has stood pat on his opposition to same-sex marriage.
Bello said he was not seeking Pacquiao's disqualification as a senatorial candidate, but was asking the elections commission to take action on the complaint.
"I imagine if they rule in our favor, which I believe they will, then they will have to tell Manny that he would have to comply with it," Bello said, adding that if Pacquiao refuses to comply, disqualification from the election could be a logical outcome.
Bello's petition said that if the spirit and intent of the Fair Elections Act were to be strictly followed, then Pacquiao should be required to go on leave from his profession during the campaign period.
"He has all the rights to exercise his boxing profession after the elections, but to schedule his boxing bout during the campaign period and close to the elections is obviously taking advantage of his personality and his profession, extending undue benefit to his candidacy," the petition said.
It was not clear when the Commission on Elections would decide on the issue.
Associated Press 2016