Oregon occupier hailed as a hero 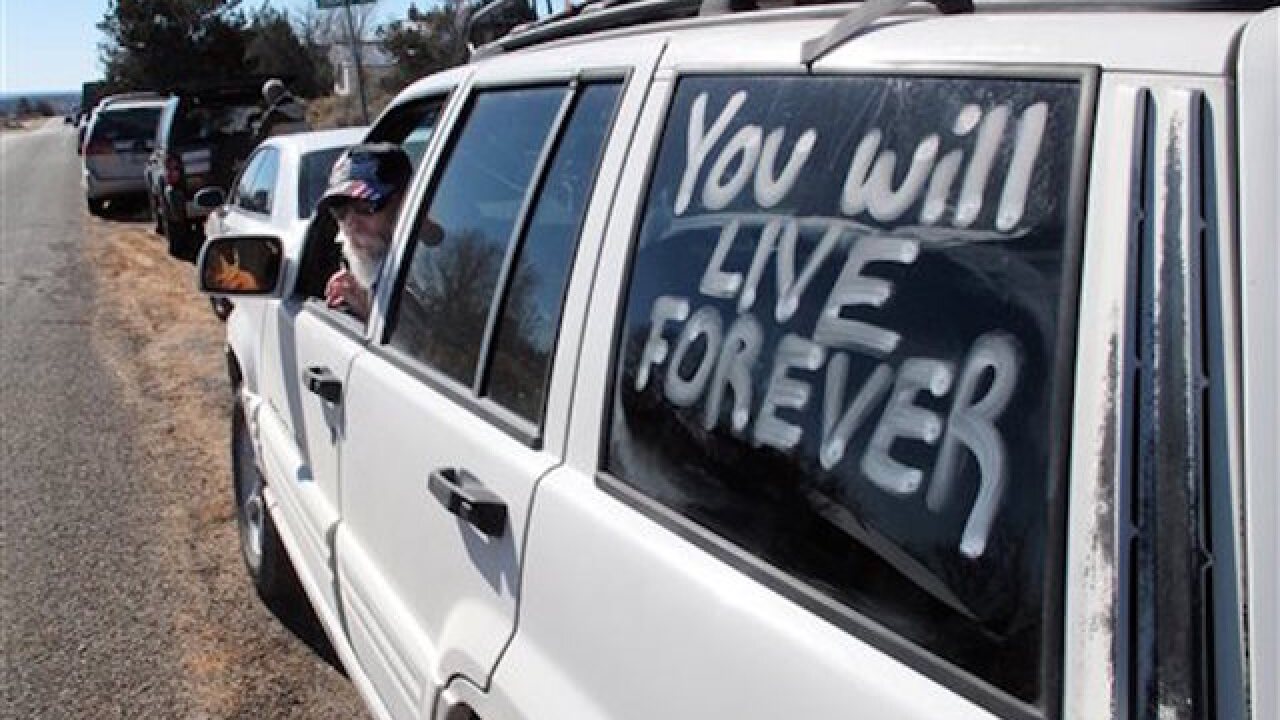 Copyright Associated Press
Felicia Fonseca
<p>Ben Matthews, of Port Huron, Mich., awaits the funeral service for Arizona rancher Robert "LaVoy" Finicum outside a church in Kanab, Utah, on Feb. 5, 2016. Matthews says he met Finicum during a takeover of federal land in Oregon. Hundreds of people packed a Mormon church in rural Utah for the viewing ceremony for the fallen spokesman of the Oregon armed standoff. Police shot and killed Finicum during a Jan. 26 traffic stop after they say he reached for a gun. His supporters called it an ambush.(AP Photo/Felicia Fonseca)</p>

KANAB, Utah (AP) — Inside a packed Mormon church in this desert town Friday, a leader of the Oregon armed standoff who died in a confrontation with authorities was called a man of conviction and not a threat to the law enforcement officers who shot him.

"My dad was murdered defending the liberties so that we may be free of bondage," said Brittney Beck, a daughter of Robert "LaVoy" Finicum, who died Jan. 26 during a confrontation with FBI agents and Oregon state troopers.

Finicum's death on a remote Oregon road has become a symbol for those decrying federal oversight, on public lands in the West and elsewhere, and has led to protests of what they call an unnecessary use of force. But authorities say the 54-year-old was reaching for a gun during the confrontation.

At the funeral, Finicum's family drew on their faith and quoted scripture in describing their father as a man of conviction and courage.

One daughter, Thara Thenney, said her father was "defiled, mocked and eventually slain."

"He had never, not once, abandoned his trust in the Lord," she said.

The funeral was held inside a Mormon church, but national leaders of the Church of Jesus Christ of Latter-day Saints last month denounced the armed takeover of the Malheur National Wildlife Refuge and said they were "deeply troubled" by reports the occupiers were using scriptural principles to justify it.

Ammon Bundy — a Mormon and the main leader of the refuge occupation —has said he was following divine orders when he and his followers seized the refuge Jan. 2. Bundy demanded the government change federal land policies and free two ranchers imprisoned for setting fires.

Bundy is among 12 people in custody for their involvement in the ongoing occupation outside Burns, Oregon. Bundy and four others were arrested during the Jan. 26 confrontation that left Finicum dead.

Four occupiers remain holed up at the refuge, refusing to leave without assurances they won't be arrested — an unlikely prospect since they are among 16 people named in a federal grand jury indictment.

Hundreds of people from across the country packed the church for Finicum's funeral. Trucks with American flags filled the parking lot. One had a flier with a picture of Finicum and the words, "Murdered by the FBI."

"He's a hero to me, honest. His heart is for everybody," said former occupier Ben Matthews of Port Huron, Michigan, who came to Kanab to pay his respects.

The day's events in this town just north of the Arizona border were billed as "LaVoy Finicum's Stand for Freedom."

Family and friends wore red, white and blue ribbons featuring Finicum's picture and pieces of blue tarp pinned to their shirts. Finicum had been called "the tarp man" after spending a night under a tarp at the wildlife refuge when he feared an imminent raid by officials.

Sheriff's officials and the Utah Highway Patrol were on hand to ensure the events were peaceful. Given the anti-government sentiment that was expected among the crowd, local law enforcement agencies pleaded with the FBI and other federal agents to stay away.

Of the 16 Bundy followers charged with felony conspiracy, only three have been allowed to leave jail ahead of trial. They include Shawna Cox, who was in Finicum's truck when he was shot.

Just hours before the funeral, a federal judge in Portland allowed Cox to attend the ceremony in her hometown but ordered her not to discuss the standoff.