3 people believed aboard 2 planes that collided 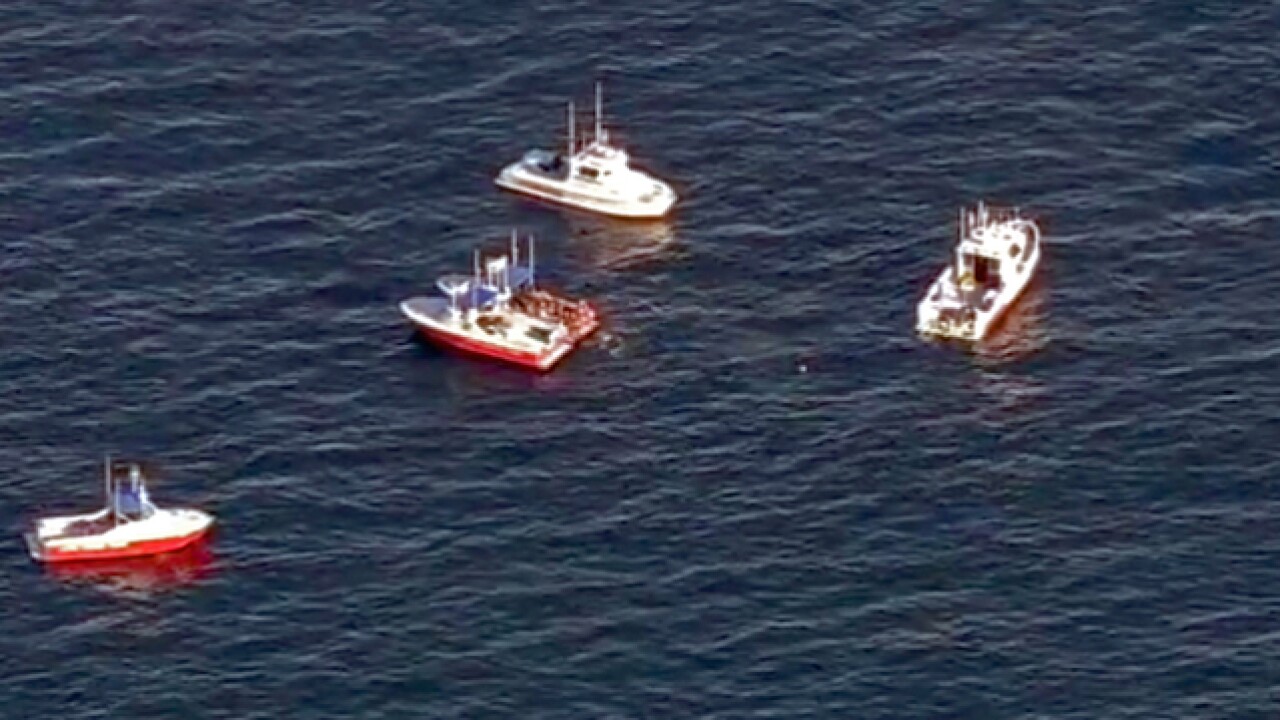 <p>In this still frame from video provided by KABC-TV, a flotilla of boats search for wreckage from two small planes that collided in midair and plunged into the ocean off of Los Angeles harbor Friday, Feb. 5, 2016. There was no immediate word of any survivors, authorities said. The planes collided at around 3:30 p.m. and apparently went into the water about two miles outside the harbor entrance, U.S. Coast Guard and other officials said.(KABC-TV via AP) </p>

One small plane with two men aboard and another plane with one woman aboard have collided over the ocean near the Port of Los Angeles, setting off a major search that has yet to turn up any survivors or dead, the U.S. Coast Guard said.

The collision occurred about 3:30 p.m. Friday on a dazzlingly sunny day, with no immediate word on what might have caused it.

Men ages 61 and 81 were believed to be aboard one plane, a Beechcraft. Wreckage and a pilot's logbook have been found from that plane, Coast Guard Capt. Jennifer Williams said.

The other plane, a Super Decathlon flown by a 72-year-old woman, is missing, and air traffic controllers saw two aircraft apparently run into each other on radar, leading authorities to conclude they must have collided.

Both planes had taken off from the nearby Torrance Airport, and both pilots were experienced, Williams said. All three people live in the nearby South Bay area. No names have been released.

The search for wreckage and possible survivors over a 200-square-mile area is expected to continue through the night with helicopters and boats, with a more extensive search resuming Saturday.

"We don't want to give up until we really feel that there's no chance," Williams said, "that we haven't scanned the area, searched the whole area and looked for survivors."

The area of the collision is about two miles outside the entrance to the harbor, where water depths were 80 feet to 90 feet.

The nearest harbor entrance was closed to traffic while the search continued.

The crash site was near the Angels Gate light, a lighthouse at the San Pedro Breakwater that is on the National Register of Historic Places. The area is popular for flight students.

Richard Garnett, chief flight instructor with the Long Beach Flying Club, said the pilots practice in an area that is 10 to 20 square miles and at altitudes ranging from 1,000 to 4,000 feet. On a typical day, there will be three or four planes in the air at the same time.

"So with the amount of activity, actually, I think we've been fortunate," he said. "We are really diligent. I don't know why, what happened in this situation."

Friday's midair collision was not the first in the area.

In 2001, four people died when two Cessna airplanes carrying instructors and students collided 1,000 feet above the harbor. In 1986, two small planes flown by students collided. But the aircraft managed to return to their airports, and the four people on board escaped injury.