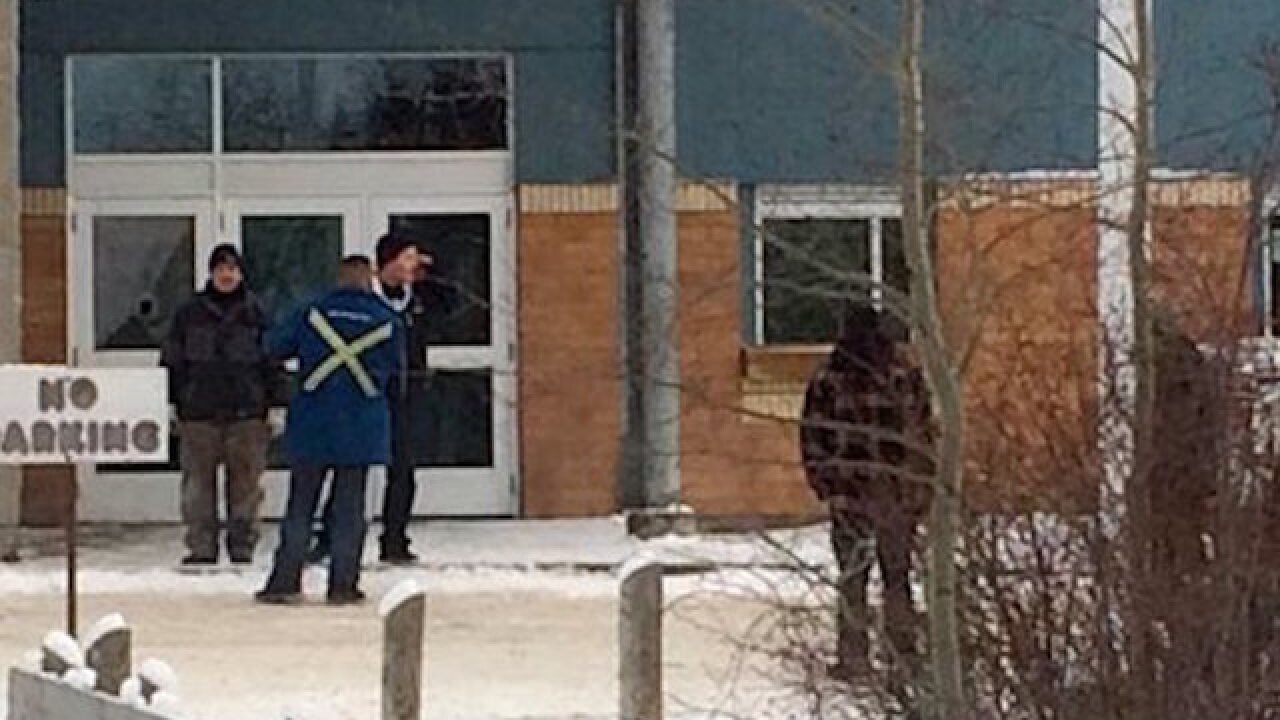 Copyright Associated Press
Joshua Mercredi
<p>The outside of La Loche Community School is shown on Friday Jan. 22, 2016. Prime Minister Justin Trudeau said the shootings occurred at a high school and another location but did not say where else. School shootings are rare in Canada. The grade 7 through 12 La Loche Community School is in the remote aboriginal community of La Loche, Saskatchewan. (Joshua Mercredi/The Canadian Press via AP)</p>

TORONTO (AP) — Police on Saturday charged a 17-year-old boy with four counts of first-degree murder and seven counts of attempted murder in a mass shooting at a school and home in a remote aboriginal community in western Canada, officials said.

Police said two brothers, 17-year-old Dayne Fountaine and 13-year-old Drayden, were shot dead in a home before the gunman headed to the grade 7-12 La Loche Community School. Police responded to a call of shots fired at the school shortly after the lunch hour.

Royal Canadian Mounted Police Commanding Officer Brenda Butterworth-Carr said when officers arrived at the school they saw the front door had been shot open. They entered the school, spotted the suspect and gave chase before apprehending himl. He is due in court next week.

Police said they were not aware of a motive and declined to say what type of gun was used.

"This is a significant event for Canada," St. Germaine said. "It's a huge impact on the community of La Loche. It's a part of changing times. We are seeing more violence."

Residents lit candles and placed flowers at a makeshift memorial outside the school.

Shootings at schools or on university campuses are rare in Canada. However, the country's bloodiest mass shooting occurred on Dec. 6, 1989, at Montreal's Ecole Polytechnique, when Marc Lepine entered a college classroom at the engineering school, separated the men from the women, told the men to leave and opened fire, killing 14 women before killing himself.

The educational assistant killed at the Saskatchewan school was identified as 21-year-old Marie Janvier. Deegan Park, her boyfriend of three years, said he would have given up the rest of his life just to spend another year with her.

"I grew up not a good guy, but she turned me right," Park told The Associated Press. "She was that much of a great person to turn me right from all the wrongdoings I used to do. ... She was a fantastic person."

"I loved her, I really did," said Park, who remembered her smile and how she would blush when she was happy.

Kevin Janvier said his daughter was an only child. "I'm just so sad," he said.

Ashton Lemaigre, a teacher at the school and friend of Marie Janvier, said she worked as a teacher's aide in his classroom. He said she was kind and patient with children and planned to get her teaching degree someday.

"The kids loved having her around," Lemaigre said. "They would just come running to her. And she was just a friend to everybody."

A second victim was identified as 35-year-old Adam Wood, a new teacher at the school. His family in Ontario issued a statement describing him as an adventurer with a passion for life who made people laugh until their stomachs hurt.

"Adam had just begun his teaching career in La Loche last September and was enjoying his time," his family said. "He was always up for a good challenge and lived each day joyously."

A student who was just returning from lunch when the shots were fired Friday said his friends ran past him urging him to get out.

"'Run, bro, run!" Noel Desjarlais-Thomas, 16, recalled his friends saying to him as they fled La Loche's junior and senior high school. "There's a shotgun! There's a shotgun! They were just yelling to me. And then I was hearing those shots too, so of course I started running."

The RCMP said the first reports of shots being fired at the school came in around 1 p.m. Friday, and parents and residents were warned to stay away. A nearby elementary school was also placed on lockdown as a precaution.

Saskatchewan Premier Brad Wall said he is in a state of disbelief. He planned to visit La Loche on Sunday and promised to provide crisis support and counseling services.

He added that U.S. Ambassador to Canada Bruce Heyman had offered the counsel of U.S. communities which have experienced school shootings.

"He noted that quite tragically the United States has more experience with the likes of what we saw in La Loche," Wall said.

Bobby Cameron, Chief of the Federation of Saskatchewan Indian Nations, said the shooting Friday was the worst tragedy to ever hit the community of 3,000. The Dene are an aboriginal group who inhabit the northern parts of Canada.

"It's not something you ever imagine happening here. The whole community, province and country has been affected and we will all go into mourning," said Cameron, who attended the La Loche school's graduation ceremony for the past few years.  "Right now we're just in a state of shock and disbelief."