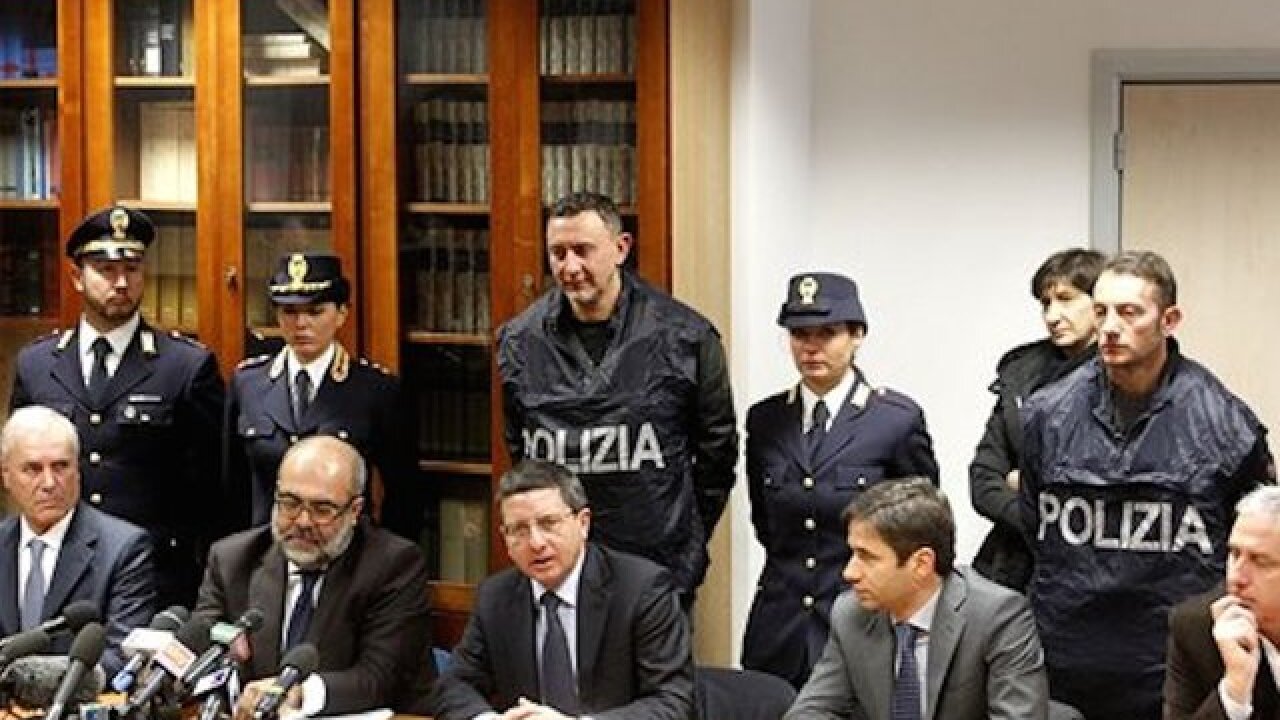 Fabrizio Giovannozzi
<p>Members of the media attend a news conference by Florence chief prosecutor Giuseppe Creazzo, center sitting at table, on the investigation on the death of American woman, Ashley Olsen, in Florence, Italy, Thursday, Jan. 14, 2016. DNA analysis of a condom and cigarette butt led Italian prosecutors to arrest a Senegalese man in the death of Olsen who suffered two fractures to her skull before being strangled in her Florence apartment, they said Thursday. (AP Photo/Fabrizio Giovannozzi)</p>

FLORENCE, Italy (AP) — Italian prosecutors say "decisive" DNA analysis of a condom and cigarette butt led them to arrest a Senegalese man in the death of an American woman who suffered two deadly fractures to her skull before being strangled in her Florence apartment.

The naked body of Ashley Olsen, 35, of Summer Haven, Florida, was discovered Saturday morning by her boyfriend.

Florence chief prosecutor Giuseppe Creazzo told a news conference Thursday that investigators had detained Cheik Tidiane Diaw, a 27-year-old who arrived recently in Italy from Senegal, based on witness testimony, DNA analysis and because he had Olsen's cellphone.

He said Diaw had offered "substantially admissive" testimony in response to the accusations during a preliminary interrogation that lasted until 4 a.m. Thursday. Diaw has not yet been charged.

Citing witness testimony and street cameras, Creazzo said Olsen and Diaw met for the first time at the Montecarla disco in Florence early Friday and went together to Olsen's apartment in the Tuscan city's historic center.

He said they had consensual sex. Both had drunk alcohol and possibly taken drugs over the course of the night.

He said the autopsy determined that Olsen had suffered two fractures to her skull that were so violent they alone would have killed her. She was subsequently strangled.

Police detained Diaw after DNA analysis came back from a used condom and cigarette butt found in Olsen's toilet, as well as biological samples taken from under her fingernails that belonged to Diaw, Creazzo said. Investigators matched that evidence from a DNA sample taken from a cigarette Diaw smoked while being questioned at the police station, prosecutors said.

Diaw was also tied to the crime because he had taken Olsen's cellphone, put his own SIM card in it and used it, Creazzo said.

"We have gathered serious indications of guilt against him," Creazzo said, adding however, that a judge must confirm the arrest.

Prosecutors didn't say if Diaw had a lawyer or had been assigned a court-appointed lawyer.

Creazzo said Diaw had arrived in Italy illegally a few months ago to join brothers who had been there for some time. He told investigators he was working odd jobs, handing out flyers for local nightspots. Police said Diaw was detained around midnight at the apartment where he had been living.

Diaw, who remains in detention, is suspected of aggravated homicide, given the brutality of the death and Olsen's compromised state, Creazzo said.

Olsen moved to Florence a few years ago and was active in the expatriate arts scene. Her father is a professor at a local design institute.