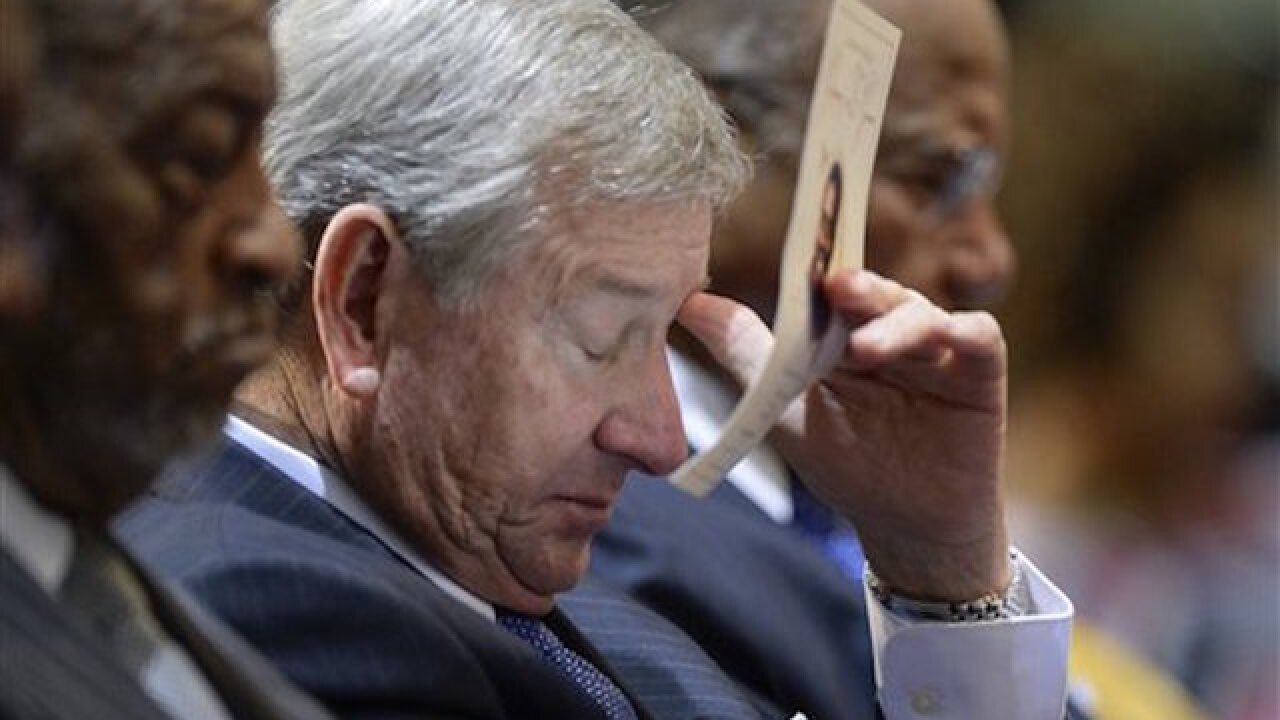 MONTGOMERY, Ala. (AP) — Relatives, friends and former classmates crowded a funeral service Saturday for a 58-year-old black man who authorities say was shot and killed by a white Montgomery police officer.

The mourners paid homage to Gregory Gunn, who police say was shot by Officer Aaron Smith on Feb. 25. Smith was arrested recently and charged with murder in the case.

"Greg's life is not in vain, for look at all of us who he has touched," the Rev. Herman Calhoun said at Saturday's service at the True Divine Baptist Church in this Alabama city. "Greg's life was a life that has been used by God."

Those who spoke described Gunn as a joyful man who loved cars and was a mentor to his nieces and nephews.

Gunn's niece says he would give her some spending money every time she brought home an 'A' average on her report card. She recalled she started doing so well that Gunn rescinded his normal offer, but would take her for rides in a prized sports car instead.

"It felt good for him to be proud of me," she said. "He always made you feel joyful."

Leon Wilson, provost at Alabama State University, sought to lift the group of about 200 mourners. Gunn had attended that college, where he studied accounting and pledged the Kappa Alpha Psi fraternity.

"In moments like this it may seem we are pawns in the hands of fate, tossed about in uncertainty," Wilson said. "But I read a book called the Bible that says otherwise."

Activist Jamel Brown says organizers didn't want to talk specifically about the case. Brown, 25, who knows the Gunn family, told the crowd that Smith's arrest was "progress" but the community should still push for justice.

"When you put on a badge and you put on a gun, you are sworn to protect and serve your community," Brown said, adding it doesn't give "any legal right to harass the black community."

Smith's attorney said his arrest is a "political witch hunt" meant to appease the community amid a national debate over police violence in minority communities.

"It simply boils down to a political calculation to placate activists, to prevent another Ferguson," defense attorney Mickey McDermott said Thursday. "That's just the world we're living in now."

An independent autopsy commissioned by the Gunn family revealed the man was shot five times, forensic pathologist Dr. James Lauridson said. The state's official autopsy has not been released, pending the ongoing investigation.

The quick move to charge a white officer with murder in the shooting of a black man stood in contrast to past episodes of police violence dating back decades in Montgomery.

A cover-up after a deadly police shooting of a black man in 1975 led to the resignation of the mayor, police chief and multiple officers. The city has erected two monuments in memory of the victim, Bernard Whitehurst.